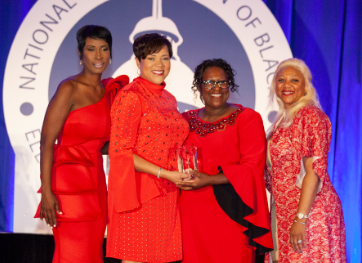 The National Organization of Black Elected Legislative Women, or NOBEL, held their 2018 legislative conference in Birmingham, which ran June 28- July 1. The four-day-event brought some of the country’s most distinguished women of color to speak on pressing matters that plague the nation.

The theme of this year’s conference was “Creating Leadership Opportunities by Empowering Women and Girls.”

“One of the things that we’ve seen throughout the country, especially the last year to two years is that there has been a strong shift in the women’s movement to empower women, to give women more thought in social justice and all types of social issues and social matters throughout this country,” said state Rep. Juandalynn Givan, D-Birmingham, who serves as this year’s chairperson.

NOBEL closed out their conference with the Shining Star Gala Saturday, June 30 at the Sheraton Hotel. The regal event honored local and national women, whose causes greatly contributed to their respective communities.

Sen. Doug Jones, D-Alabama, gave his opening remarks, commending the female legislator’s achievements, while briefly touching on the harsh political climate. Jones challenged the audience to “not just yell and scream and point fingers” but to use their time to fight for causes like education, healthcare and fare living wages.

“But we look at it as a challenge,” Jones said. “Look at it as an opportunity.  Let’s not let them get us down. Let’s make sure that we rise above and make sure that we meet the challenges of the next generation. We meet the challenges of this twenty-first century and when we do we’ll have a lot more ‘Doug Jones wins elections across the South’ and across this country and we will get it back.”

State Senator Vivian Figures was honored with the Lifetime Achievement award for her 20–plus years of service in Alabama. State Rep. Laura Hall was also honored with a commissioned portrait and song dedication. The song titled “This Lady”, was penned by songwriter Joe Lewis and sung onstage by Barbara Williams.

“We are definitely in a state of disrepair in this country and unlike movements in the past where were undergirded by the federal government,” Burke said while accepting the National Shining Star award. “We are at a moment now where we cannot count on the Supreme Court or the Congress or the president and for that reason, this is more important to have gatherings like this to have opportunities to speak to community leaders like the ones in this room because this is where the change is going to happen.”

Using sexual violence as example, Burke challenged her fellow honorees, local and national, to work within their own communities to kick-start a chain reaction., stating “We can’t legislate our way through healing, but you can certainly create policies and practices to make our communities way less vulnerable than they are because your constituencies are also survivors.”

The conference held a myriad of panels, created to bolster women on a national and local level. Additional events, included “Host Night”, the conference’s official kick-off party at the Birmingham Museum of Art with Hip Hop veteran Doug E. Fresh.

Congresswoman Maxine Waters, who was scheduled to speak at the conference, had to drop out amid racially-charged death threats. Her last-minute cancelation came after a tweet from President Trump, claiming that she “called for harm” to his supporters. Waters was slated to hold “A Moment with Maxine”, an interactive panel that allowed participants to dialogue with the lauded politician.  In addition to her Alabama appearance, the California politician canceled other engagements in Texas.

“I stand with Congresswoman Waters,” Givan said of the incident. “This is a difficult time in which we are in, but I also believe in the right to free speech. We may not always agree with what people say, but people do have the right to say it and my message to her is if we don’t censor Donald Trump, then why should we censor her?”