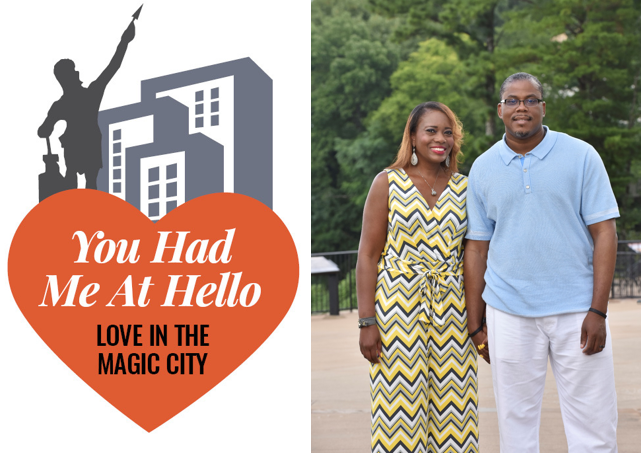 “You Had Me at Hello’’ highlights married couples and the love that binds them. If you would like to be considered for a future “Hello’’ column, or know someone who would, please send nominations to Ariel Worthy at awothy@birminghamtimes.com. Include the couple’s name, contact number(s) and what makes their love story unique.

Met: If you count a few telephone calls back in high school, Angela and Aquil met in 1988 when they were both in the 10th grade. He was a student at Huffman High School and she was a student at Ramsay High School.  It would be another 10 years before they would actually meet in person.  In 1997, one of Angela’s friends passed along her business card to Aquil, who owned along with his family the Music N More stores in Birmingham. When the friend mentioned Aquil to her she remembered the name and the telephone calls. “I remember he was the boy whose daddy made him get off the telephone at 10,” Angela recalled. Aquil called Angela up and they made plans for a first date.

Ups and downs: “It went really good for a few months and then it didn’t,” Angela said. By July of 1998, the relationship had come to an abrupt end. “I was really young and didn’t know how to be with someone,” Aquil said.

“It was a terrible break up, but we remained cordial,” Angela said.

Over the next few years, Angela and Aquil married different people.  In 2004, Aquil’s father was killed in one of the family-owned stores. Angela reached out to him to offer condolences. Aquil would occasionally provide music to Angela for her job, but the two did not speak much during this time. Aquil remembers being in a bad place emotionally after losing his father and having to close some of the music stores and restructure the business. Angela and Aquil had both gotten married to other people. By 2010, both Aquil and Angela were divorced. Angela had not spoken to Aquil, but she decided to send him a friend request on Facebook. “It was a gift of God to me that she reached out,” he said.  Aquil was having drinks at a bar in Trussville when Angela sent him a message via Facebook.  He asked her if she wanted to get dessert and he ended up driving to Alabaster to meet Angela.

“That night we had the best conversation I had ever had,” he said.

The couple rekindled their romance after that date, but more challenges lay ahead.  In 2011, Aquil’s last remaining store was destroyed in a tornado and the business he had worked in since he was 14 years-old effectively closed.  Out of work and on government assistance, Aquil struggled to maintain the relationship with Angela. “He was used to being a successful businessman, that was a difficult time for him.”

“For a man, not being able to provide for his partner, I felt like less of a man,” he said. At one point, Angela recalled, Aquil was working three part-time jobs from morning until night and she rarely saw him. “Things got really rocky,” he said.

Angela had her own challenges. That same year she was diagnosed with lymphedema and faced other medical and financial hardships.

For five years, the couple was on-again-off-again. “I was growing up,” he said. “And I was softening,” she said.

By September of 2016, Angela was set to have two surgeries. Aquil took time off work to care for her.

The proposal: Aquil was helping Angela following a surgery in September.  He had made her a bowl of soup and was walking up the stairs to give it to her. He was lost in thought. “I was suddenly thinking ‘Why am I afraid of marriage.’ And I was standing outside of her bedroom door thinking about all of the things that we had gone through and it all clicked. It was as if God were speaking to me.” So Aquil walked into the room, gave Angela the soup and asked her to marry him.

“I’m a fanfare and glitzy type of girl,” Angela said. “But when he said, ‘why don’t we just get married?’ I appreciated that more than something grand.”

A few weeks later, Angela went through another surgery and Aquil asked her parents then for her hand in marriage.

The wedding: The couple invited friends to a holiday bash at Grille 29. They asked for everyone to dress up and be on time.  What friends suspected was an engagement.  But Aquil and Angela had planned something entirely different. At the party, Aquil “proposed” to Angela, but to everyone’s surprise the couple had planned a wedding and got married right then and there. “It was great,” Angela said. “I remember the surprised looks on their faces. We had our closest family and friends there. From the wedding it went on to be a full blown celebration.”

“It was freezing that day,” Aquil recalled of the wedding day. “It was full day and we rode to the wedding together. I floated around all night talking to my family and co-workers.”

The two agreed on a fiscally smart, but special wedding and they achieved that.

Words of wisdom: “Don’t give up on something you really believe in,” Aquil said for couples who may experience a rocky path to togetherness.  Angela said she and Aquil would not have been successful if they had wed at age 25 and Aquil agreed. “It was too much responsibility at the time.” he said. “But I knew that we would be together. There was a special kind of person I needed and that was her.”

“He put us back together to move in one direction,” he added. “We owe it to Him to make the most out of this second chance at love.” Aquil and Angela hope to help others with their story. They mentor young men and women on life and relationships.

“I don’t wish our path on anyone,” Angela said. “But we have gone through a lot and with a lot of prayer and love for each other and patience we have grown a lot spiritually. We actually like each other as much as we love each other. For me life continued even when we were not together and I made sure that time was not wasted.”

Happily ever after: Angela, 46, and Aquil, 45, are happily settled now. Angela is the Americorps Director at the YWCA Central Alabama and also a lifestyle and food blogger. Aquil is the phone bank manager at Wells Fargo.

The couple enjoys spending time as a family with Aquil’s two children, Kameryn, 15 and Jordan, age 13. The couple is undergoing what Angela calls financial reconstruction so they are frugal but still enjoy things like going to concerts and eating out at restaurants.  “Before (Angela) I didn’t really know what vacation and family time was like,” he said. “She’s taught me how to relax and enjoy life, and we plan on doing that together for the rest of our lives.”