By Chandra Sparks Splond
Special to the Times

All good things must come to an end.

Roby never intended for the series, which began in 2000 and chronicles the lives of a prominent Illinois pastor and his family, to happen.

“When I first wrote Casting the First Stone, the first book in the series, it was never my plan to write a sequel,” Roby said during a recent interview. “However, because my readers continued asking for four years if I would in fact be writing one, I eventually did, and from there the Reverend Curtis Black series was born.”

Since the first book, the main character Reverend Curtis Black has evolved.

“From the very beginning, my hope was to bring Reverend Curtis Black full circle. What I wanted was to show that anyone, if they choose, can turn their lives completely around for the better. And now that Curtis has done that, I knew it was time to end the series,” she said.

According to Roby, Better Late Than Never centers on Reverend Curtis Black and the vivid recollection of his abusive and impoverished childhood; his terminally-ill sister who he has been estranged from for years; his wife, Charlotte, and how she secretly hasn’t wanted to be first lady of Deliverance Outreach for years; and their youngest daughter, 12-year-old Curtina, who is now causing more problems in the household than Curtis and Charlotte ever thought possible.

Now that the series has concluded, Roby won’t stop writing. Instead, she will shift her focus to the release of her first nonfiction project, but the ending of the Reverend Curtis Black series is bittersweet.

“I will miss hearing my readers discussing Reverend Curtis Black and his family with so much energy and excitement,” she said. “I just want to say how thankful I am to God and my readers. I really do have the best readers in the world, and I am forever grateful to all of them.”

Chandra Sparks Splond is an editor, speaker and award-winning author and blogger. For more information about her and her books, visit www.chandrasparkssplond.com. 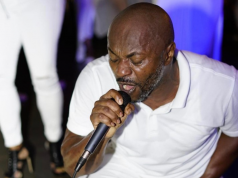