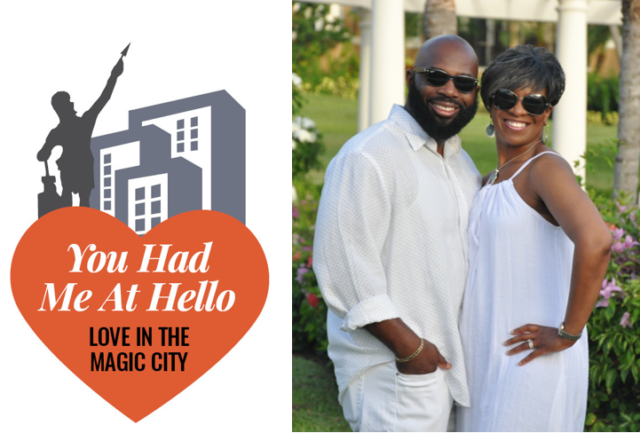 Met: In February 1991.  JaWanda was planning a singles banquet at her church, Faith Temple in Birmingham, when Eddie approached about sponsoring someone to go to that banquet. “We had seen one another at church,” JaWanda said. “But we never talked.” Eddie could not attend the banquet, but he did ask JaWanda if she had a date to the event. “He was scoping me out,” JaWanda recalled.

“She was beautiful and well dressed and so put together; she was the total package” Eddie said. “I wanted to make sure she wasn’t attached.”

While he did not attend the event, Eddie did call JaWanda after that first day they met. He was calling to inquire about something else for a friend. That conversation, which lasted into the early hours of the morning, gave him the courage he needed to ask her out.

First date: “I wanted to do something special and I had heard about the Tutwiler Hotel,” Eddie said. “I made a reservation for us, dressed up and picked her up and treated her like a queen that night. There was a piano player and candle light at the table.”

JaWanda said she was smitten. “It was a beautiful experience,” she said. “We were just so at home with each other. We were so relaxed in each other’s presence even on the first date.”

It took just one month before JaWanda and Eddie figured out that the relationship was serious. “We believed … God had ordained for us to be together,” JaWanda said.

The proposal: One night in March — just a month after meeting — Eddie asked JaWanda to marry him. “It was really simple,” JaWanda said. “He proposed to me at my home and I said yes.”

Eddie said he was thrilled JaWanda said yes, but if he could go back to that proposal, he would make it even more special. “I know how to do things now,” he said. “Women are so special and precious; I would do it totally different now. I would lay it out.”

The wedding: The couple married at Faith Temple.  In just under four months they managed to put together a wedding with over 350 guests and 12 attendants.  “It was a beautiful wedding,” JaWanda said.

Eddie said he remembers most how he felt that day preparing to marry JaWanda. “I just had a feeling of gratefulness,” he said. “I was thankful and felt blessed to have found someone to love me. I just wanted to give God the glory.”

JaWanda recalls how happy Eddie was. “He was all smiles that day,” she said. “I will never forget that.”

Words of wisdom: Eddie said the marriage is built on Jesus Christ as the foundation, and suggests couples look to build a similar foundation for a lasting relationship. “We pray together and read the Bible together … it is just beautiful,” he said. He suggested couples put God first and take the selfishness out of the relationship.

JaWanda agreed. “We put Him first in all things and allow Him to lead us and guide us. That is why it has been 27 years of marriage for us.”

She also suggested couples start early building communication skills. “I believe it is important from the onset of the relationship so that you know upfront what you are getting into,” she said. “You have to be willing and able to communicate and if that is a struggle then you know you are going in the wrong direction.”

Happily ever after: JaWanda and Eddie are parents to three sons — Jeremiah, Je’Niah, and Eddie “EJ” Jr. — and two granddaughters— Kennedy and Olivia. The couple minister at their church House of Prayer Evangelistic or HOPE Church. They also have a successful business JaWanda’s Sweet Potato Pies in Inverness.  JaWanda and Eddie are football fans — they love both college and professional football— and look forward to fall and football season.  They also enjoy traveling and recently spent time in Aruba and Montego Bay Jamaica.