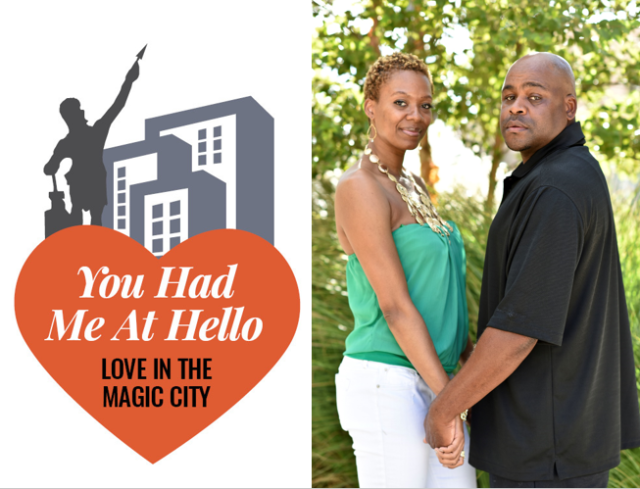 Met: Andre and Shejuana met in the Spring of ’97. Shejuana, a high school senior at Ensley Magnet, was “skipping school with a girlfriend” when Andre’s cousin would invite him over to keep the girlfriend company. Andre was free because he had already graduated. “My cousin called and told me to come by, so I said, alright, I’ll come check her out.” The two exchanged numbers and Andre said he called her that evening and they talked all night.

First date: The couple admits to having several typical teenage hang sessions at Shejuana’s home for a few weeks, but it wasn’t until Andre proved himself a true gentleman that they would go out. “I had gone out with my older sister to a real “grown folks” party,” Shejuana said, “and I was uncomfortable…I was in a unpleasant situation, and I called him to come pick me up,” she said.

“I didn’t think nothing of it,” Andre said. “We had been talking on the phone for a while, so I went and picked her up,” he said. “And I was so relieved that he came,” Shejuana added.

This would lead to their first date. “I asked her what she felt like doing now, since it was still early, and she said let’s go to the movies,” Andre said.

“We went to dinner and a movie,” Shejuana recalls. “We went to Ruby Tuesday’s on the Southside, and then the Wynnsong (a now closed movie theater near the Wildwood shopping center) movies on Lakeshore in Homewood.” From there the relationship progressed quickly. “We met in March of 97, and was engaged by July of 97,” Shejuana said, “It just felt real and it felt right.” With her parents blessing, “I proposed,” Andre said,

The proposal: When they got engaged, rings and traditions didn’t matter to them, the Edwards said. “It was a vibe,” Andre said.

“He proposed to me over the phone,” Shejuana said, “and hung up right after he asked me…didn’t even let me answer the

question,” She laughed, “I had to call him back to tell him yes.”

Andre admitted that he got nervous. “I didn’t have a ring or nothing … but we’ve never made those things important, it’s just always been about us,” Andre said.

“The things that other women make important in a relationship, I’ve just never cared about. It’s all about our connection,” Shejuana added.

A month later, the newly engaged couple found out that Shejuana was expecting.

“Once we found out she was pregnant, I knew I had made the right decision [a month ago] to make it official, Andre said. “I didn’t see her as my girl, I saw her as my family.”

The wedding: Five years later they were married at her grandmother’s house wearing “cream sweaters and nice jeans”.

Shejuana’s grandmother did both pre-marital counseling and a “real special and intimate ceremony.”

They went to dinner at Chili’s [afterwards], with their daughter Destiny. “I remember feeling like we’re a real family now,” Shejuana said. “Then Andre’s parents gave us a bigger party, a reception at their house on Christmas day.”

“There was a strong feeling of warmth, support and assurance. And yes, we were very happy to be taking that step, there was not a doubt in our minds that that’s what we were supposed to be doing,” Shejuana said.

For the honeymoon, the newlyweds took a weekend trip to Twin Pines in Shelby County off 280. “We had a nice cozy cabin right by the lake. We burned the fireplace which added to romance,” Shejuana said.

Words of wisdom: Honesty, communication, balance, respect and support of each other’s growth throughout the years is key, according to the couple.

“I do not agree with happy wife, happy life,” Shejuana said. “I feel that if you are happy as an individual and with yourself then you will have a happy life. I feel it is unfair to make your happiness anyone’s responsibility but your own. I feel that is selfish and one sided and not what a union should be about.”

“If you focus on what the situation is showing and teaching you, rather than your emotions and words you will find resolution,” Andre said. “The two of you are becoming one, and for any two puzzle pieces to fit together they have to be shaped. So, be willing to change and grow… let go and find your balance.”

Shejuana adds: “Oh and keep it sexy ladies, date with intention and by all means let ‘her’ out in the bedroom. We all have a little ‘her’ in us,” she said.

Regular intimacy in a long-standing marriage is unequivocally important to the Edward’s. “I’ve always been a sensual woman, I don’t hide it,” said Shejuana. “Intimacy is a major part of who we are.”

“With kids and all,” Andre said.

Happily ever after: The Edwards’ live in Trussville with daughters, Destiny, 20, Amina, 10 and Salia, 2. Andre, 43, is a Queens, New York native, a John Carroll High School graduate, and attended Alabama Agriculture & Mechanical University. He is a City of Birmingham employee. Shejuana, 40, is a Birmingham native, and creator and founder of ‘Couples Vibe’, a social group geared toward helping couples connect and/or reconnect in a social environment. She homeschools her two youngest daughters.

She said, “I love everything about being married. I love what it’s shown me about myself, my husband and about us,” Shejuana said.

“I have loved watching us grow together,” Andre said. “We have three beautiful girls that we created together. We enjoy watching (them) grow. They are our greatest joy of marriage.” 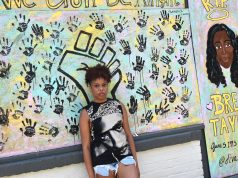