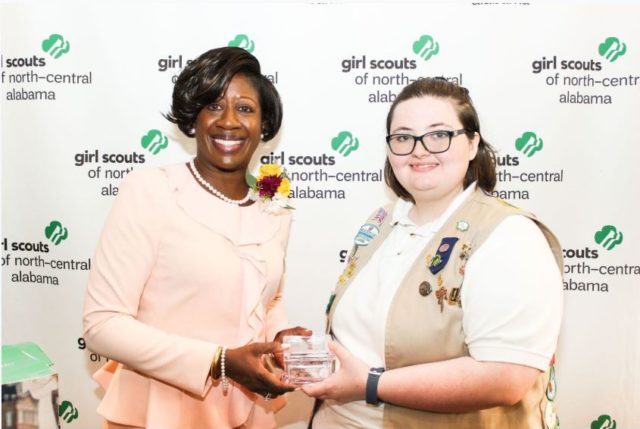 Eight women from the metro area were honored last week with awards for excellence during the One Smart Cookie celebration held by Girl Scouts of North-Central Alabama.

The Women of Distinction event, held at the Harbert Center in downtown Birmingham, was emceed by two Girl Scouts, 8th grader Shawnise Gregory from Our Lady of Sorrows Catholic School in Homewood and 6th grader Charlotte Hottle from Pizitz Middle School in Vestavia Hills.  Honorees were recognized for their contributions through civic, academic or professional involvement.

Adams spoke about learning from mistakes. “The key to making mistakes is not repeating them. Learning from them, advancing yourself and striving never to repeat those failures, but only to grow from them,” she said.

Huntley said the women being honored were important to help the young girls realize their ability.

“Particularly people like me who grew up with drug-dealing parents and coming from severe challenging circumstances,” she said. “When they see people, who have been where they have been, yet have overcome those circumstances, there is nothing more motivating than seeing those real-life examples.”

Frances Faulks leader of Troop 208 at Sixth Ave. Baptist Church, said being a Girl Scout is “an opportunity for them to learn how to be confident. Many of them have low self-esteem, and it’s an opportunity to get better with their self-esteem, she said.”

Patel recalled when she was a Girl Scout cadet leader. “It’s inspiring, it draws strength. Girl Scouts gives strength. These girls shouldn’t just see examples of success; mentorship is also very important. My success came from my mentor, and I saw her as a role model,” she said.

Karen Peterlin, CEO of the Girl Scouts of North-Central Alabama, said the organization is more than outdoors and nature. Science, Technology, Engineering and Mathematics (STEM) is also a big part of their program.

“Our founder [of The Girl Scouts of America] Juliette Gordon Low always said that we had to continually change our program to provide girls and young women what they need for the times,” Peterlin said. “Now, what’s important is for our girls and young women to get exposure to STEM . . . we’re really working on cybersecurity, coding, robotics; anything that can get them an introduction to STEM.”

This year, Vulcan Materials Company Foundation received an award for its support of Girl Scouts of North-Central Alabama.

“Women are awesome and smart and have an incredibly high emotional intelligence and work harder than the law allows,” Sinor said. “It’s a business imperative to bring women into organizations when you want your business to thrive.”

Proceeds from the event will provide low income and underserved girls in local communities the same access to the Girl Scout Leadership Experience as girls in traditional troops.