The Alabama Historical Commission and the Alabama Trust for Historic Preservation “Places in Peril” program is entering its 25th year. Over the years, the list has featured bridges, caves, antebellum houses, and other structures that represent the history of Alabama. Several properties in Birmingham and across Jefferson County have made the list. Here are the most recent, by year.

The Southern Railroad Co. built the Finley Roundhouse in Northwest Birmingham to service its locomotives in 1915, when the city’s iron and steel production made it a hub of railroad operations. The roundhouse and its adjacent railyard were named for the company’s deceased president, William Finley.

Like much other industrial architecture of the time, the Acipco-Finley neighborhood-based roundhouse, which provided large open spaces for working on enormous locomotives, was built with steel-reinforced concrete walls and roofs. Its clerestory (a high section of wall containing windows above eye level) features a double band of windows beneath the elevated central portion of the nearly flat roof, illuminating the 25 engine berths in the spacious interior with natural light.

Although the railroad tracks inside the building and the 90-foot-diameter turntable (used to redirect train cars) that once sat in the semicircular courtyard outside have been removed, the spartan character of the cavernous interior remains as a testament to Birmingham’s industrial might during the early 20th century. Over time, steam locomotives were largely replaced by diesel-fueled trucks, and railroads were challenged by other means of transporting goods. In 1952, the Finley Roundhouse was converted into a cold-storage warehouse, and a rectangular warehouse was built adjacent to it.

The evolution of containerized shipping changed the Southern Railroad Co. business model, and in 2003 the roundhouse and warehouse facilities closed. A decade later, a tornado damaged the roof of the 1952 warehouse, but the monolithic roundhouse continues to stand high and dry—a fitting legacy to the role of rail transportation in Birmingham’s once prosperous iron-and-steel industry.

Since 2012, local teenage railroad enthusiast Khari Marquette has been on a mission to preserve the historic structure. He started a Save the Finley Roundhouse group and social media campaign on Facebook, and he formed a nonprofit group to promote the preservation and revitalization of the remarkable reinforced-concrete structure, which is one of only two roundhouses left in Birmingham and the largest of its type in Alabama. Marquette’s efforts have garnered support from the Mid-South Chapter of the Railway and Locomotive Historical Society, the Jefferson County Historical Commission, and the Jefferson County Historical Association, all of which have endorsed the significance of the Finley Roundhouse and recognized the urgent threat caused by its abandonment.

Marquette has taken a hiatus while he attends college.

For more information on this cathedral of industrial architecture, see Save the Finley Roundhouse on Facebook. 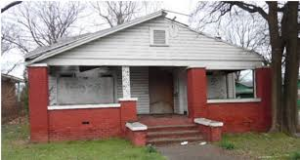 This modest gable frame bungalow built circa 1929 still stands across the street from the historic Bethel Baptist Church and next door to the church’s second parsonage. It remains in the family of James Revis, a deacon in the church during the pastorate of Rev. Fred Shuttlesworth (1922-2011), who was the founder of the Alabama Christian Movement for Human Rights headquartered in the church and a national leader in the Civil Rights Movement. After the church was bombed on Christmas day in 1956, destroying the original parsonage, the front porch of the Revis House was used by volunteer “civil rights guards” to watch the church and its newly constructed parsonage. Parishioners soon enclosed half of the front porch with jalousie windows and installed a gas heater for the guards, each of whom also served shifts in a shack behind the new parsonage to guard the rear of the houses. In 1961 when Freedom Riders were assaulted in Birmingham and their bus burned in Anniston, they were harbored in the parsonage for several stressful days. Consequently, in 2005 the historic Bethel Baptist Church, its parsonage built in 1957, and the Revis House were designated a National Historic Landmark for their role “in the origins and evolution of the church-led southern civil rights movement of the 1950s that used nonviolent mass techniques to bring social change to racial democracy.” The historic church building and the 1957 parsonage are stable, both under the auspices of the Bethel Baptist Church Historic Community Restoration Fund, a non-profit group associated with the active church which is located in a new and larger building nearby. However, the Revis House sits derelict. In recent years the porch windows were stolen and there are now holes in the roof. The owner, the community, and the City of Birmingham all support stabilization of the building and revitalization, perhaps as part of the Birmingham Civil Rights National Park which includes the A.G. Gaston Motel, Sixteenth Street Baptist Church, the Birmingham Civil Rights Institute and other landmarks in downtown Birmingham.

The Federal Reserve Bank of Atlanta, Birmingham Branch, is an early-twentieth-century neoclassical commercial structure with Art Deco influence by one of Alabama’s most renowned architectural firms. It sits in the heart of Birmingham’s banking 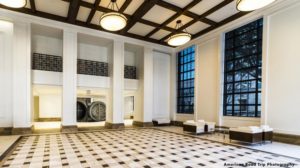 and legal center. Although individually listed on the National Register of Historic Places, it had been vacant for several years. The building was renovated in a $20 million historic redevelopment project and opened in 2017. It houses Birmingham commercial real estate firm Graham & Co. and its affiliated company GCP. It also houses communications agency Markstein and law firm Hand Arendall. All together, the renovated building, which also includes Urban Cookhouse on the ground floor, brought life back to a long vacant property and continues revitalization in the heart of the city center.

The Federal Reserve Bank building is the second oldest of the U.S. government structures in the city’s center. It and the old U.S. Post Office (1921, now the U. S. Courthouse), the Hugo Black U.S. Courthouse (1985), and the Attorney General’s Office (2002) are adjacent to the city’s revitalized historic theatre district. Although the bank lobby was altered in conjunction with the 1958-9 addition, it retains its original footprint and has been restored as the grand and gracious reception area redolent of the Roaring Twenties before the stock market crash and Great Depression, which it survived in style. 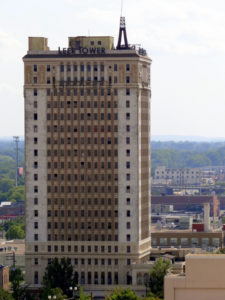 The Thomas Jefferson Tower is a 19-story building, completed in 1929 as the 350-room Thomas Jefferson Hotel, at 1623 2nd Avenue North on the western side of downtown Birmingham. It is also known for a tower in its roof intended to be a zeppelin mooring mast.

The Thomas Jefferson Hotel was planned and developed by the Union Realty Company, headed by Henry Cobb. The hotel featured an ornate marble lobby, a large ballroom, and a rooftop mooring mast intended for use by dirigibles. The ground floor incorporated space for six shops and the basement included a billiard room and barber shop. The ballroom and dining rooms on the second floor opened out onto roof terraces from which the main tower rose.

A $35,000 improvement project was undertaken in 1933. Some of the retail spaces were subsumed into a larger hotel lobby with an electric fireplace. The dining room was similarly expanded and a banquet room was constructed over part of the roof terrace. Birmingham newspapers declared the 200-room Thomas Jefferson Hotel as one of the finest in the country. Built to host huge gatherings, the $2.5 million facility was stocked with 7,000 pieces of silverware, 5,000 glasses and 4,000 sets of linen. All rooms were air conditioned and provided with a private bath, radio, television and Muzak. The hotel operated a laundry and valet service and housed a coffee shop, lounge, pharmacy and barber shop.

Its luxury status made the Thomas Jefferson a prime spot for celebrities visiting the city, including Mickey Rooney and Ethel Merman. U.S. Presidents Calvin Coolidge and Herbert Hoover and singer Ray Charles have also stayed at the hotel. But most of the guests were businessmen, often salesmen who rented one room for sleeping and another as an office for peddling their inventory.

The 1970s marked a period of decline for the aging luxury hotel, renamed as the Cabana Hotel in 1972. A new rooftop sign advertising the hotel was then added, along with a main hotel sign. The original ornate carpets were now replaced with shag carpets, and dropped ceilings were added. The economy had slowed, and a shift of attention to the northern end of town left older hotels, such as the Cabana, struggling. The scene was typical nationwide, as corporate mergers and new projects prompted the closing of many old buildings.

During its peak, the Cabana hosted Mickey Rooney and Ethel Merman during visits to Birmingham. A special suite was reserved for Bear Bryant during games at Legion Field. In Birmingham, the Cabana was the last of the perennial hotels to fade away following the demise of the original Tutwiler Hotel in 1974, and the Bankhead Hotel conversion into senior housing. Its demise was also quickened by the opening of the Birmingham-Jefferson Convention Complex. It was a slow death that stripped it of most of its former glory. The hotel was shut down on May 31, 1983, by city health officials after it was declared uninhabitable on account of “bad plumbing, insufficient lighting, some inoperative smoke detectors and failure to upgrade to city fire codes.” 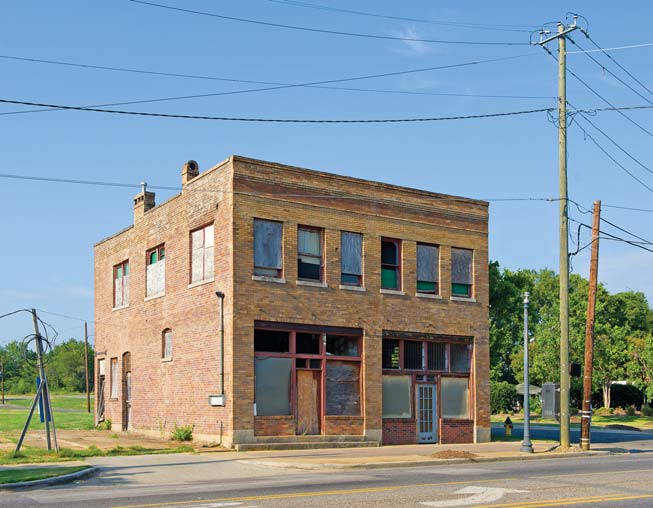 The Windham Construction Company Office Building is a remarkable reminder of a successful African-American business that flourished in a segregated society.  The building was home to Windham Brothers Construction Company, a major black contractor that built some of the most significant buildings in Birmingham.   Wallace Rayfield, Alabama’s first formally trained black architect, designed the building and collaborated with Windham Brothers to build the Sixteenth Street Baptist Church and the Alabama Penny Savings Bank, Alabama’s first black-owned bank. In 1927, the company built the sevenstory Birmingham Railway, Light and Power Co. Building.  Listed on the National Register, the structure is unoccupied and threatened by vandalism. Restoration of the building could help to revitalize the adjacent Smithfield neighborhood. 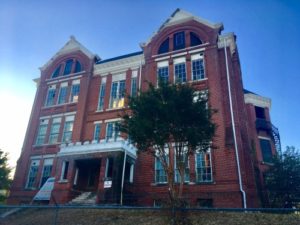 Seeking to attract new residents, Birmingham founder and Elyton Land Co. president James R. Powell donated four blocks in 1873 to build Powell School, the city’s first public school.  The initial building was replaced in 1888 by the current structure.  For over a century, thousands attended Powell School, also known as the “Free School.” The three-story red brick structure has a stone foundation and represents the Victorian Gothic style.  The façade has three primary bays, which are divided into three bays separated vertically by pilasters and horizontally by brick courses.  Vacant since 2003, the school symbolizes the city’s early business leaders’ commitment to public education.  A January 2011 fire destroyed the roof and most of the interior, leaving Powell’s future in doubt.  UpDATe: The city of Birmingham is in the process of transferring ownership of the school to the Alabama Trust for Historic Preservation.

Source: The Alabama Historical Commission and the Alabama Trust for Historic Preservation; en.wikipedia.org.