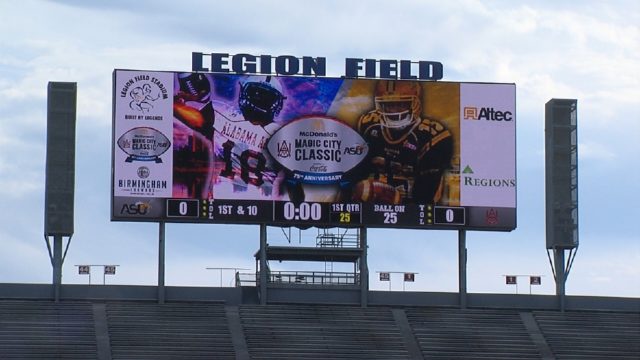 For Birmingham residents, Legion Field is more than just the stadium where Alabama State and Alabama A&M face off in the Magic City Classic (MCC) every October. The Old Gray Lady, as the stadium is known, is also part of history for those who live in the city’s Graymont neighborhood.

That’s why talk of moving the popular matchup away from Legion Field and abandoning the facility for a new downtown Birmingham facility has some concerned.

“We vote there,” said Graymont Neighborhood Association President Willine Body, speaking about Legion Field. “I’m able to do town hall meetings and other events for the neighborhoods. We’re able to use it because it’s close to us. … It’s historical in a sense. It’s history.”

Legion Field, which turned 91 this year, will be the host site for the 77th meeting between Alabama State University (ASU) and Alabama Agriculture & Mechanical University (AAMU) on Saturday, October 27, at 2:30 p.m.

Time may be winding up, however, for football at the venerable stadium—home of the MCC since 1946. The city of Birmingham has approved construction of a $174 million open-air stadium downtown that would have up to 55,000 seats and additional meeting and exhibition space. That has raised questions about the future of the Old Gray Lady.

The Birmingham City Council recently approved a contract that allows the MCC to be played at Legion Field through 2022, though no one knows what will happen once the contract expires and the new stadium opens in 2021 as the primary home for the University of Alabama at Birmingham (UAB) Blazers football team.

“My thought was, ‘OK, what’s going to happen to the stadium we already have?’” Body said. “I’m definitely for keeping the stadium, but, as I’ve told officials, … there should be events that come into the city and come to Legion Field. We know the new stadium is going to support itself with different events, … [but] we should have events at both stadiums, not just African-American events [at Legion Field]. There should be a balance.”

“My concern was always that if [the city has] two open-air stadiums of the same caliber, Legion Field would end up dying while the other project gains life,” she said.

Scales, who grew up near Legion Field, also has concerns that the revenue for the city each year could decrease.

There are several reasons this could happen, Scales said. One is the seating: “The new stadium would seat fewer than 50,000 potential patrons. Legion Field, however, has 72,000 seats.”

Another concern is that the historical significance—particularly the decades-long tradition of tailgating outside the stadium—would be lost. Having the game at a downtown stadium means limiting tailgating spaces to a restricted area.

“We’re taking the world’s largest [Historically Black Colleges and Universities (HBCU)] game and putting it into a stadium … that doesn’t accommodate what the MCC has for years brought to the city of Birmingham—more than 100,000 people gathered in one place at one time,” Scales said.

City Councilor Steven Hoyt agreed: “If we move [the MCC] anywhere else, it takes away the wholesome environment … because parking is at a minimum downtown. I really don’t care how many parking decks they put downtown, they still won’t accommodate a game as large as the MCC.”

Hoyt, who attended graduate school at AAMU, said alumni should also be concerned that a “tradition” is being considered for another location.

“[Some families] have a tradition of coming to the same spot every year,” he said. “Tailgating is just as much part of the game as the game itself.”

AAMU National Alumni Association President Albert J. Benefield Jr. said, “My concern is just not having enough seating capacity for one of the largest events [held] in Birmingham.”

Another option is to upgrade the Old Gray Lady, said Hoyt and Scales. For example, the University of Alabama’s (UA’s) Bryant-Denny Stadium in Tuscaloosa is not new, but it has been renovated and expanded. The same can be done for Legion Field, Scales said, noting that the improvements could be a lot less costly than the $90 million the city of Birmingham is expected to invest in the new downtown stadium over the next 30 years.

“I was told that major improvements to bring Legion Field back to its [former] luster would cost only $30 million,” Scales said. “I believe the city of Birmingham acted hastily in its decision. … I believe we should have invested in Legion Field.”

Hoyt also pointed to the enhancements at Bryant-Denny.

“It’s amazing that [UA] didn’t build a new stadium; they just added on to an existing stadium, just as Auburn [University and other schools] have done,” he said. “Why do we have to subject ourselves to going [a downtown stadium] that’s not going to be accommodating?

“If they would have taken that $90 million and put it into Legion Field, there wouldn’t be a problem with parking or anything else. It’s about as solid as any stadium in this state in terms of infrastructure; it just needs a facelift. There are several things we could do to make [the MCC] a wholesome experience.

Body agreed that the downtown stadium can’t do what Legion Field has done for decades. Every year, the Graymont neighborhood prepares for the MCC the way it would for a holiday. Some residents provide parking in their yards. Some set up as vendors, selling T-shirts and food. Some just conveniently go to the game and enjoy its festivities.

“It is an African-American event that’s held every year in a predominantly black neighborhood and community,” she said. “That’s why I feel it should stay here.”

Whether Alabama State University (ASU) and Alabama Agricultural and Mechanical University (AAMU) continue to play the Magic City Classic (MCC) in Birmingham may not be up to the city.

“You all should know that other cities are actively courting the [MCC],” Mayor Randall Woodfin told the City Council during a recent meeting. “The city of Atlanta, not necessarily through the city but through people who are in the business of sports entertainment, sees what the [MCC] provides, so they court, they seek out, they engage [the schools] and say what amenities can be offered.”

The Birmingham City Council recently approved a contract that allows the MCC to be played at Legion Field through 2022, though no one knows what will happen once the contract expires and the new stadium opens in 2021 as the primary home for the University of Alabama at Birmingham (UAB) Blazers football team. The city of Birmingham has approved construction of a $174 million open-air stadium downtown that would have up to 55,000 seats and additional meeting and exhibition space.

Woodfin pointed out what happened to the University of Alabama and Auburn University Iron Bowl rivalry, which was played at Legion Field for decades.

“They moved the games to their own cities,” Woodfin said. “I imagine that at some point the city of Atlanta is looking at what the [MCC] provides. [I said] all of that to say this: the city of Birmingham alone does not decide where ASU and AAMU play. … If they want to stay at Legion Field, we’re going to 100 percent wholeheartedly support them. At the same time, if they choose to go somewhere else, I’m going to do everything I can to make sure they stay in the city of Birmingham.”