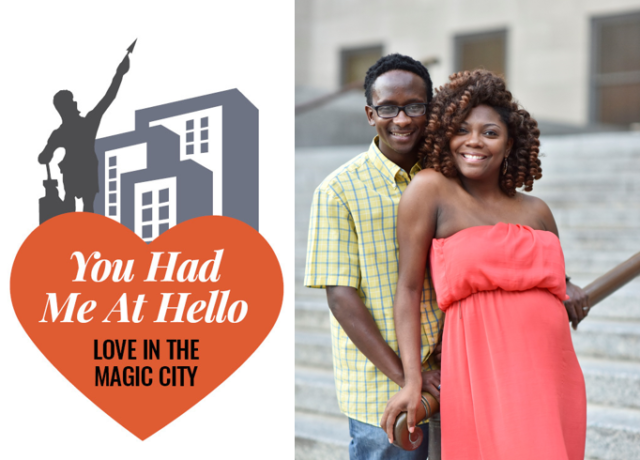 Met: Tanisha and Brandon met at the UAB Hill Center in the fall of 2004. They were introduced by mutual friends, one of whom happened to be Brandon’s cousin. Brandon recalls thinking she was an upperclassman because of her sophisticated style, “When I met Tanisha, she was always wearing lil’ two-piece suits…I always thought she was a real smart girl, educated, and sophisticated with money, so I wasn’t even thinking about asking her out at first,” Brandon said.

Tanisha remembers Brandon being the quiet one and one day mentioning he needed help with his math “so I was kind enough to let him borrow my notes,” she said. “I think that was kind of his way of sliding in and trying to get to know me.”

The following spring semester they ended up taking a class together and sitting next to each other, Tanisha said. “I was impressed with how smart he was… a lot of times when the professor would pose a question, he [Brandon] would mumble the answer, so I would raise my hand and I would take his answers,” she laughed.

Soon after several study sessions, Brandon asked Tanisha out on a date.

“It’s like she wanted to send an extra pair of eyes out with us, but it didn’t work because they went to see a different movie,” Tanisha said.

“I thought it was strange,” Brandon said. “I was thinking, ‘what…you’re bringing your brothers on our date?,’ but I didn’t say it because I didn’t want to ruin the whole first date vibe arguing or complaining . . . so I just rolled with it,” he said.

“They didn’t ride with us though,” Tanisha added, “She just wanted them to be my bodyguards.”

After the movie, the couple shot pool together where she met some of his friends. “All my friends liked her, she wasn’t stuck up and snooty… she could shoot back with them, Brandon said.”

The proposal: Valentine’s Day 2010. The couple attended the Genuwine and Charlie Wilson concert at the Birmingham Jefferson Convention Complex and spent the weekend at the Sheraton Hotel in downtown Birmingham. Tanisha said she did not expect nor see a proposal coming because “we weren’t big on Valentine’s Day,” she said. “We had decided [early on] we wouldn’t make a big deal of Valentine’s Day because we made it a point to express to each other how we feel daily,” Tanisha said.

Brandon sought the help of a good friend to help make his proposal unforgettable; they planned the surprise to happen the next morning over breakfast. Brandon’s friend hired a pianist to play along as the friend serenaded Tanisha with Anthony Hamilton’s ‘Can’t Let Go.’

“So, we’re sitting there eating and then [the friend who helped orchestrate the proposal] came around and started singing ‘Can’t Let Go’, and I pulled out the ring and slid it on the table and just kind of looked at her a little bit…and she just sat there, and then started laughing and laughing.”

Brandon said Tanisha’s laughter made him nervous and unsure of himself, but he braved the proposal and asked her hand in marriage anyway.

Tanisha says her laughter was due to nervousness. “I couldn’t say ‘yes’ right away because I had to get that laugh out and make sure I wasn’t getting punked,” Tanisha said. “I was thinking, ‘this sure is an expensive looking ring for just Valentine’s Day . . . is it a promise ring or an engagement ring?’ I had to make sure he was asking me, I didn’t want to make a fool of myself, hollering ‘yes, yes, I’ll marry you’, being all dramatic and it not be a proposal”

The wedding: Faith Chapel Christian Center in Birmingham. The colors were “canary yellow and oasis blue”.

Tanisha remembers Brandon’s serenade during the reception. “His singing was definitely the most memorable for me,” Tanisha said. “He has this shy, mysterious factor about himself, so that [his serenade] was surprising.”

Brandon said he’s not much of a singer, “but after I interrupted the DJ, and pulled [Tanisha] to the middle of the floor, I started off by saying, ‘I’ve been practicing this song in the shower for three months’ and started singing ‘Always and Forever’ by Heatwave.

“There goes that ‘mystery’ factor that I love that about him,” Tanisha said. “I started screaming and jumping and…I was like, ‘the reception is over, I’m ready to go!’”

The couple honeymooned in the Florida Keys and the Bahamas.

Words of wisdom: “It’s a team effort, you both have to put in a lot to get a lot out of it,” Brandon said. “People want so much from it [marriage], but don’t want to do much for it, both partners have to work at it continuously and not quit.”

“Communication and forgiveness” are key for Tanisha. “I think a lot of times in a marriage, we think we’re communicating, but there’s a difference in communicating and effective

communication,” she said. “You can talk, but you can’t talk at each other; we’re committed to working it out to the end, period. And no grudges– We say, ‘I’m sorry a lot,’ we are not afraid to ask for forgiveness from each other, our kids imitate that.

Brandon said being married means “you always got somebody to talk to and someone to share your hobbies with. Road trips, family time, water balloon fights with the kids, there’s never any boredom.”

Happily ever after: The Fosters have two children, son Carrington, 5, and daughter, Journey, 3, and they enjoy spending quality time with their family.

Tanisha, 34, is a sixth and seventh grade science and math teacher at Advent Episcopal Day School, and the founder of ‘Chop Friendly’, an organization that aims to bring awareness to food allergies. Brandon, 33, is a sergeant in the Birmingham Police Department.”

The couple likes to share new experiences together “like the time we went skydiving,” Tanisha said. “We’re an adventurous couple. On our honeymoon we went parasailing, and horseback riding.”