The Americans were members of the four-team Central Division of the World Football League (WFL). The Americans, founded in late December 1973, played in the upstart league’s inaugural season in 1974. The club played all of their home games at Legion Field. The most successful of the World Football League franchises, the Americans led the league in attendance and won all 13 of their home games. The Americans finished the 1974 regular season at 15–5 and won the 1974 World Bowl by one point over the Florida Blazers. The franchise accumulated $2 million of debt and didn’t play another season.

The Vulcans, founded in March 1975, played in the upstart league’s second and final season in 1975. The Vulcans replaced the Birmingham Americans who had held the WFL franchise for Birmingham in 1974, winning World Bowl I in December 1974 before suffering financial collapse. The Vulcans were the best team in the league in 1975 with a 9–3 record and best at the box office until the league folded in mid-season.

The Stallions played their home games at Legion Field and competed in all three USFL seasons, 1983–1985. During their run, they were one of the USFL’s more popular teams. The Stallions starting QB in 1984 and 1985 was Cliff Stoudt, a long-time backup to Terry Bradshaw with the Steelers. Stoudt led the team to two divisional titles. However, in August, 1996, at an owner’s meeting in New York, the league votes to suspend play for the 1986 season.

The Fire played their home games at Legion Field and was led by head coach Chan Gailey, who would later become head coach at Samford University, Dallas Cowboys, Georgia Tech Yellow Jackets and Buffalo Bills. The Fire saw moderate success as they compiled an overall record of twelve wins, nine losses and one tie (12–9–1) and made the playoffs in both seasons they competed. The franchise folded in September 1992 when the NFL placed the league on an indefinite hiatus.

The Barracudas were part of a failed attempt to expand the CFL into the United States. Attendance at Legion Field was very good at first. The Birmingham crowds were some of the largest in the league. Their last four home games did not attract more than 9,000 people, and looked even smaller than that since Legion Field seated over 83,000 people at the time. In 1996, due to financial hardships most of the remaining American-based franchises folded. 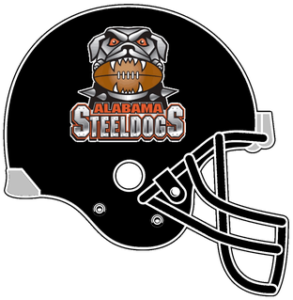 The Alabama Steeldogs, originally known as the Birmingham Steeldogs, were incorporated in 2000 as one of the charter teams in the AF2, the developmental league of the Arena Football League. The team played its home games at the Birmingham Jefferson Convention Complex Arena in downtown Birmingham. Entering their eighth season as of 2007, they were the longest running of many professional football franchises in the city of Birmingham. But, management announced that it would not field a team in 2008.

The Thunderbolts were a short-lived springtime team based in Birmingham and part of the failed XFL begun by Vince McMahon of World Wrestling Entertainment and NBC. Birmingham went through all three quarterbacks during the season including former University of Alabama quarterback Jay Barker. NBC dropped the XFL after the first (2001) season due to dismal ratings, and the league was disbanded shortly thereafter.

The Alabama Outlawz joined X-League Indoor Football for its inaugural 2014 season, playing their home games in Bill Harris Arena. Several teams folded or left the league towards the end of the season. The X-League planned a merger with another league but the plans fell through in late 2015 and the X-League folded.

In late 2016, the Outlawz (now calling itself the Birmingham Outlawz) announced it was one of the three inaugural members of a new National Arena Football League to begin play in spring 2017. The National Arena Football League quickly rebranded in October 2016 as Arena Pro Football. The Outlawz failed to secure a lease for the 2017 season in Birmingham causing the team to play out of the Shelby County Exhibition Center in nearby Columbiana. The Outlawz eventually canceled all remaining games for the season, which were all scheduled home games.

The Birmingham Iron is a charter member of the Alliance of American Football. The league is set to begin in February 2019, and the team will play its games at Legion Field until a new stadium near Birmingham–Jefferson Convention Complex has completed construction. The new stadium is expected to be completed in 2021.

The Birmingham Black Barons played professional baseball for Birmingham in the Negro Leagues from 1920 to 1960 until the major leagues integrated. They alternated home stands with the Birmingham Barons in Birmingham’s Rickwood Field, usually drawing larger crowds and equal press. Among the teams players and Hall of Famers were Willie Mays (1948-1949); Satchel Paige (1927-1930); Mule Suttles (1924-1925) and Willie Wells (1941).

The Birmingham Barons play in the Southern League and is the Double-A affiliate of the Chicago White Sox. The Barons play in the 8,500-seat Regions Field. From 1988 until 2012 the Barons played at the Hoover Metropolitan Stadium, which seats 10,800 fans, and was known as “Regions Park” from 2007 until the Barons moved back to Birmingham. They formerly played in historic Rickwood Field in the West End of Birmingham. The Barons were briefly involved in a media frenzy when Michael Jordan played for the team in 1994 after his first retirement from basketball. The Barons history can be traced back to 1885, when the Barons (originally known as the Coal Barons) played in the many Southern Leagues during the early years of baseball.

The Birmingham A’s was a former minor league baseball team named for its major league affiliate, the Kansas City Athletics, later the Oakland Athletics, and played for nine seasons from 1967 to 1975 in the Double-A Southern League. The team was owned by colorful Kansas City A’s owner Charles Oscar “Charlie O” Finley, an Ensley native. His team at Rickwood Field included a Southern League championship team that included Rollie Fingers, Joe Rudi and Reggie Jackson, who later became known as “Mr. October” for his World Series heroics. As good as they were on the field, the Birmingham A’s struggled at the gate. Finley sold the team and the A’s moved to Chattanooga following the 1975 season.

The team began play in 1991 and was affiliated with the NBA’s Atlanta Hawks and San Antonio Spurs. Despite playing with former University of Alabama stars Michael Ansley and Jim Farmer, the team did not draw the attendance team officials expected during games at State Fair Arena. In May 1992, owners announce the team was been sold to a group based in Rochester, Minnesota.

The Power was one of the original franchises of the National Women’s Basketball League (NWBL). Eight home games were scheduled at Hoover High School, UAB Arena, and Fair Park’s Bill Harris Arena.  One of the principal owners of the Power was Wenonah High School girls basketball head coach Emmanuel Bell. Another owner was Lucien Blankenship, a local lawyer. The Birmingham Power folded in early December 2005 and lack of local fan interest appeared to be the major cause.

The Court Kings are scheduled to play their 12 home games in Bill Harris Arena, located at the State Fairgrounds. Leon Douglas, former University of Alabama star and NBA player was one of the coaches. After forfeiting their last five games, the Magic City Court Kings fold. Low fan attendance appears to have been a major factor.

Founded in 2011, the team was owned by Birmingham Blitz LLC and in part by former professional basketball player Ronald Steele, who played at John Carroll High School and the University of Alabama. The Blitz played their home games at Bill Harris Arena.  In early 2017, the Birmingham Blitz was sold to businesswoman Kimberly Meadows Clark and renamed the Magic City Surge.

Owned by businesswoman Kimberly Meadows Clark, the Surge is a pro basketball team and member of the American Basketball Association (ABA). Clark renamed the team to Magic City Surge from Birmingham Blitz when she became owner. The league is a re-launch of the original ABA—founded in 1967 and partially merged with the National Basketball Association (NBA) in 1976. The Surge’s season began in November and ends in March.

The New Orleans Pelicans and the NBA G League announced in October that the Pelicans have acquired the right to own and operate an NBA G League team that will play in the renovated Legacy Arena in Birmingham, Alabama.  The team is expected to debut in Birmingham in the 2022-23 season following the renovations.

The Bulls began play in the 2017–18  season as a member of the Southern Professional Hockey League. The team is named after the previous Birmingham-area teams in the World Hockey Association and East Coast/Central Hockey League.

In 1992, Art Clarkson obtained the rights to an East Coast Hockey League (ECHL) franchise for Birmingham and named it after the former World Hockey Association team, the Birmingham Bulls. However, he sold the ECHL team in 1997 and it eventually relocated in 2001. In early 2017, Clarkson proposed a new Bulls team. Due to arena issues, the team could not play at the Birmingham–Jefferson Convention Complex like the other former teams, but instead settled on the Pelham Civic Center in February 2017.  The Southern Professional Hockey League (SPHL) announced its approval of the Bulls as an expansion team on April, 2017 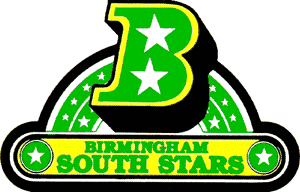 This franchise was affiliated with the Minnesota North Stars of the National Hockey League. The South Stars played, but lost, in the CHL’s championship series, but only drew 11,419 paying customers to their five home games. The team lost money during the season with the major expense being travel.

The Slammers played their home games at Pelham Civic Center and league folded after one season, with three of the remaining teams moving to the Southern Professional Hockey League, but the Slammers folded before making the move. The Alabama Slammers announce that the franchise will suspend operations, effective immediately. The press release claims the suspension of the franchise comes as a result of the Slammers being unable to secure a lease at the Pelham Civic Complex for the upcoming 2004-05 season. The Alabama Slammers never returned to the ice, but hockey eventually returned to Birmingham in 2017 when Art Clarkson formed his Birmingham Bulls as members of the Southern Professional Hockey League.

Set to debut as an expansion member of the United Soccer League in 2019, Birmingham Legion FC is the Magic City’s first and only locally owned and operated professional soccer franchise. The club will play home matches at a newly renovated BBVA Compass Field, on the campus of the University of Alabama at Birmingham, beginning in the spring of 2019.