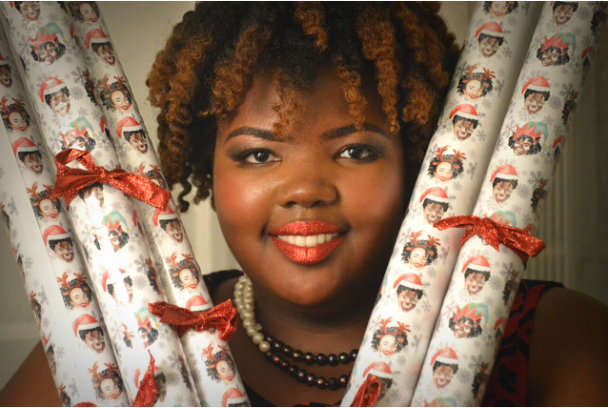 It’s amazing to see how much things can change in a year. Kristin Farmer would know.

Only a year ago, Farmer launched her business, Curly Contessa, a holiday wrapping paper line that embraces girls with curls. She also has expanded her business to glassware—and that’s only the beginning.

The 30-year-old graphic designer and watercolor artist has plans to grow her offerings beyond wrapping paper and glassware and become a one-stop gift shop for women who look like her. She is considering adding products customers may want to buy their loved ones for Mother’s Day or graduations, “gifts for your best friend or your girlfriend, … something you can cherish or give to the people in your life.”

Farmer sells her wrapping paper and glassware year-round, and she is working on trying to release one new product once a season to build her collection.

Farmer is one of five children: she has one brother and three sisters, and she is the second youngest of her siblings, all of whom grew up in Ensley with their parents, Bernard and Dorothy Farmer.

“I’ve always been artistic. I would draw on [the] walls [of our house] in crayon,” she said. “I was maybe 4 or 5 when I started … [coloring] on the walls, [though] sometimes it wasn’t me; it would be [one of my sisters], and she would write my name by it. I would paint illustrations of Barbie dolls because I love them, and I would just mainly draw figures.”

Farmer kept up her art at Councill Elementary School in Ensley, but by the time she got to Bush Middle School she didn’t draw as much because the school didn’t have an art program. Her passion for art was rekindled while working on a literature-class project during her senior year at Ensley High School.

“It just sparked the creativity again,” she said. “I wanted to do something creative, and that helped me pick the field I was going toward in college. I never really imagined what I was going to do, but I just knew it would be great because whatever I touched turned to gold. I didn’t expect anything less.”

Farmer graduated from Ensley High School in 2006, the school’s last graduating class before it closed and merged with P.D. Jackson-Olin High School. She then enrolled at Samford University, where she majored in graphic design. Farmer credits her college experience for teaching her valuable business-related lessons, including how to build a product from conception to fruition and market it.

“That’s a big component of how I was able to build this brand,” she said. “My studying there, taking [courses in] advertising and publication design, … learning how to build a website, … [as well as recognize and market to] a target demographic helped me construct this project.”

Farmer graduated from Samford in 2011 and began working at the University of Alabama at Birmingham (UAB) as an art director. At the time, she also embarked on a business venture: Flair Koncepts, a branding, graphic design, and illustration company.

“With Flair Koncepts, I freelance and do work for a couple of local companies that don’t have full staffs and [women who are in business by themselves or with little help],” she said. “I fill in the gaps for them.”

In 2015, after she couldn’t find something that represented her and women like her, Farmer got the idea for her signature business, Curly Contessa.

“I was sitting at a coffee shop telling a friend about a business I wanted to do and that I wanted to do glassware. He said, ‘You should do that, but my wife and I save wrapping paper. … There are no black Santa Clauses on [wrapping] paper.’

“I took that idea with me and thought I would solve a problem,” Farmer said. “There wasn’t any African-American wrapping paper, and my niche happened to be African-American women, so I did black women with curly hair.”

Two years later, after doing extensive research, Farmer launched Curly Contessa. It took a month to get everything together, from the illustrations to selecting the paper, and on Nov. 1, 2017, she officially launched her business.

Curly Contessa wrapping paper features five watercolor images of African-American women with natural hair. Farmer, who wears her hair naturally, painted the women and even included herself in one of the images.

Though her business launched only a year ago, Farmer has been drawing the “Contessas,” the name she always gave her figures, since she was a child.

“I’ve always drawn figures, and they’ve always had curly hair, so I called them ‘Curly Contessas,’” she said. “Contessa is Italian for noble woman, head of household, and a lady of the court. … The women I draw are strong, powerful women: they are heads of their tribes, households, or circles; they are go-getters; they are strong women in who we are when it comes to embracing ourselves. The curly part comes from our hair texture. … ‘Curly Contessa’ stands for matriarch of curly tresses.”

This summer, Farmer launched the line’s glassware portion, which includes the Black Girl Magic pint glass and the My Tribe 20-ounce wine glass; the latter features illustrations of Farmer and women she considers part of her village, or tribe.

“People are identifying with [the glassware], and that’s the purpose of it—for people to have something they identify with and see themselves,” she said. “That’s what I’m all about.”

Farmer hand-draws her glassware illustrations before transferring them to her computer, creating what is known as vector art; it takes about eight hours to complete a set of glasses.

Looking Toward the Future

To expand even further, Farmer, who said she’s very strategic about what she releases, would like to focus more on gift bags and cards to give little girls for their birthdays.

“I know I’m going to do cards next year, so I have a line of cards for different people in my demographic,” she said, adding that it’s important to keep growing her line featuring African-American women and girls and tap into an often-overlooked market.

“Representation matters,” Farmer said. “Black women and little black girls need to see themselves on [products] that celebrate our unique beauty, embrace our natural hair texture. It is important to find joy in one’s self and to celebrate ourselves. I don’t think we do that enough. We don’t have enough things in the marketplace to do that, … so I’m here to make a product that celebrates us and represents us.”