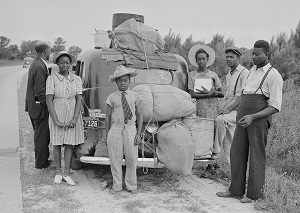 NEW YORK—Black Americans’ relationship with the automobile has been checkered.

In the era of Jim Crow and years after, those thousands of pounds of steel represented freedom for the descendants of slaves and sharecroppers as they took breaks from hard work for the nation’s new highways and vacations on the road. But that travel also represented threat, as Black families passed through unfamiliar places and worried about lynchings and the Klan.

Then of course there are the most recent bumps in that relationship between Black people and the car. The automobile has been a significant prop in numerous police traffic stops that have ended in death for Black motorists or passengers like Sandra Bland and Philando Castile.

All this promises to be explored in “Driving While Black,” a documentary in the works by a Cooperstown, N.Y., academic, a longtime documentary maker, The Andrew W. Mellon Foundation and Steeplechase Films scheduled to be shown on PBS next year. During a sneak peek at the first half hour of the film in New York on Friday, Dec. 7, those behind “Driving While Black” said Black family travel in the 1930s through the 1960s was a demonstration of race advancement and civil rights.

“I think one of the things that’s very important is that this is an accessible topic and it’s a way in for people who are not people of color to think about issues of race because of the automobile,” said Dr. Gretchen Sullivan Sorin, director of the Cooperstown Graduate Program in Museum Studies, affiliated with the State University of New York College at Oneonta.

Sorin, who worked on the documentary with the filmmaker Ric Burns, made the comments during a panel discussion after the screening.

“The automobile is such an accessible object — something that everyone knows about and everyone remembers. Everyone remembers going on vacation with their family and stopping at gas stations,” Sorin said. “I’ve found that people are very comfortable talking about the automobile. It gives them a window, a way into talking about very difficult issues in an accessible way.”

“Driving While Black” is part of a surge in attention on an era that saw Black families taking long car trips, packing their own food because restaurants wouldn’t serve them and sometimes sleeping in their vehicles because they could not stay in hotels. The movie “Green Book” starring Oscar winner Mahershala Ali is about a Black pianist’s tour through the South and about The Negro Motorist’s Green Book, a directory published by a Harlem businessman that informed traveling Black Americans about which restaurants, hotels, nightclubs and other businesses would welcome them. The exhibit “Unpacking the Green Book: Travel and Segregation in Jim Crow America” was offered earlier this year at the Museum of Arts and Design, the venue where the documentary screening took place.

“It’s a story that Black people have known for a long time, that White people are discovering,” Sorin said.

The first 30 minutes of the film, shown at the screening, features a parade of photos by James Van Der Zee and other photographers showing Black Americans and their cars — in Harlem, on rural roads in the South, with their children, with their significant others. There are highway signs and signs at the entrances to towns indicating the Klan was in residence. The images are the backdrop to audio recordings of Black Americans describing their experiences, including one man’s description of being told by a White man to leave town by sundown. Another voice talks of “the call of the road” and declares “We feel like Vikings.”

Historians explain what it all means while there are snippets of places that welcomed Black travelers, such as the Marsalis Mansion Motel owned by Ellis Marsalis Sr., patriarch of the family of jazz musicians, and Dooky Chase Restaurant, both in New Orleans.

“Once they were inside this building, nobody was going to worry them,” Dooky Chase owner Leah Chase says in the film of the institution that has fed the likes of Thurgood Marshall and James Baldwin.

The genesis of “Driving While Black” comes from Sorin, who learned of The Green Book years ago while planning an exhibit with history Prof. Myra Armstead of Bard College in Annandale, N.Y.  Sorin also drew from her own memories of traveling from the home in northern New Jersey where she grew up with her family to see relatives in Fayetteville, N.C. She recalled they would drive straight through without stopping. They would eat food that her mother packed.

Those experiences motivated Sorin to begin collecting hundreds of photos of Black people traveling by car. She showed Burns those photos during a meeting between the two at a New York restaurant and the staff peeked over their shoulders to see the photos too, Sorin said.

So much is to be learned from the experiences of Black Americans traveling in their cars, the filmmakers said.

Burns told of the how travelers would often come upon lynchings. Many traveled only certain roads and at night because these were the routes they felt were the most racially friendly. Esso gas stations (now ExxonMobil) were able to gain trust among Black Americans and make money because they sold the Green Book and made it known that Black travelers were welcome at their gas stations, Burns said.

Most people connect the Black traveling history with Cadillacs, but the reality is that many turned to sturdy Buicks, Sorin said.

One reason they went for the roomy vehicles is that they served not only as a means of transportation, but also restaurant and lodging when vacationing Black families could not eat or rest at segregated places, Sorin said.

The huge vehicles also represented a sense of accomplishment for the families who could not secure a mortgage or buy a home due to redlining, the filmmakers said.

“You couldn’t buy a house, you couldn’t get a mortgage … and so you were putting the money that you couldn’t put into a house into a large car,” she said during a panel discussion after the screening.

At the crux of the tension of the film and at the concept of Black people enjoying leisure time, said filmmaker Ric Burns, is that “White people are much more comfortable with the idea of Black people working than Black people playing.”

Sorin and Burns said they have plans to show the film next year at locations that are part of the International Coalition of Sites of Conscience, a global network of historic sites and museums that seek to educate. They’ve also reached out to police departments, they said, and noted that agencies outside of the United States were more welcoming to the idea. The National Civil Rights Museum in Memphis, where Dr. Martin Luther King was assassinated, and the National Museum of African American History and Culture, in Washington, are among the places that will hold viewings, the filmmakers said.

The “Driving While Black” screening is the first in a series of documentary showings about marginalized people in America, Alexander of the Mellon Foundation said. Next year, the organization will host showings of “Owned,” a documentary that reveals the racist foundations of America’s housing policy, and “Tell Them We Are Rising,” a documentary tracing the history of historically black colleges and universities by filmmaker Stanley Nelson.

“This is the launching of something,” Alexander said during the NYC screening. “This is the beginning of a lot more public programming that will come from us.”