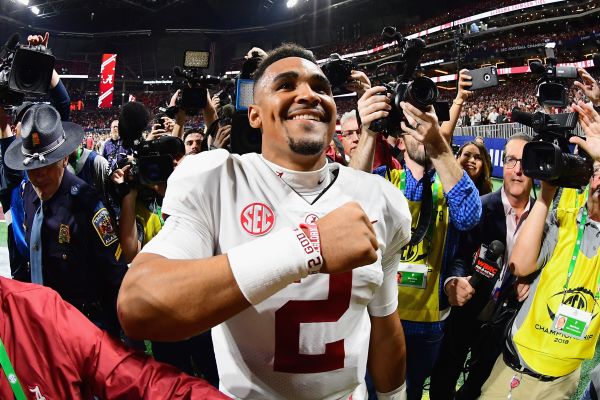 As Jalen Hurts began to run up field while executing a quarterback draw with a little over a minute remaining in the 2018 SEC Championship game against Georgia, you could see the play unfold. A lane opened up and he dashed right through it, securing his legacy in Alabama football history as he crossed the goal line and scored the winning touchdown.

Hurts has had a heralded, frustrating and historic career at the University of Alabama. In the team’s second game of the 2016 season, he took over the starting quarterback role as a true freshman and proceeded to throw for 2,780 yards with 23 TDs and nine interceptions that season.

He also added 954 yards rushing and 13 more scores on the ground, setting new school records in the process. He surpassed Steadman Shealy’s single season rushing record for a QB (791 yards) and with 36 total TDs, he broke Blake Sims’ single season touchdown record of 35.

Against Mississippi State on 11/12/16, he became the first player in Alabama history to pass for 300 yards and rush for 100 in a single game. He then became the first to rush for at least 120 yards in multiple games. He led the Crimson Tide to a 12-0 record and an appearance in the National Championship game, where they fell to Deshaun Watson and the Clemson Tigers.

As a true freshman, he was not only named the SEC’s Freshman of the Year, he was honored as the conference’s offensive Player of the Year as well.

Hurts and the Tide dominated once again in 2017.  He accumulated 2,081 passing yards, 17 passing touchdowns and one interception to go along with 855 rushing yards and eight more scores on the ground. He led the team to a 12-1 record and another appearance in the National Championship game.

After a relatively ineffective first half against Georgia where Alabama’s passing attack had struggled, Hurts was benched in favor of Tua Tagovailoa, who led Alabama to their 17th National title.

Prior to this season, there was some talk as to whether Hurts would be back. Many were suggesting that he would transfer to another program after being relegated to second string after Tagovailoa clearly established himself as Alabama’s best and most dynamic option at quarterback.

“The narrative has already been created,” said Hurts. “The funniest thing about it is I’ve never said a thing.”

He decided to return as backup while Tua did his thing under center, leading the team to a perfect 12-0 record heading into Saturday night’s SEC Championship Game against the Bulldogs.

But luck is a fickle thing, and it reared its unpredictable ways as Tua had a bad game and got hurt, which meant that Jalen had to step back under center.

The junior responded with the ice he’s maintained in his veins since he first arrived from his hometown of Houston, scoring the game’s two final touchdowns en route to a come-from-behind 35 – 28 victory over the Bulldogs.

Hurts now has a career record of 26-2 in his three seasons with the Crimson Tide. He also has one National Championship and another is only two wins away. This presents an interesting debate for fans, one which could have a stronger position in January.

He secured his legacy in Alabama history within the SEC championship game against the University of Georgia. That position is secure. But if he wins another Championship in January, especially if he actually leads the team to that victory, should he be considered the greatest quarterback in Crimson Tide history?

It’s an interesting argument, but that has sincere merit.

The way Hurts brought his team back to win the SEC title could be considered redemption. He didn’t complain, competed in practice, swallowed his pride and remained ready for when his number was called once again.

Even head coach Nick Saban got emotional when discussing his quarterback after the game.

Jalen Hurts might not have the stats of McCarron, or the flair of 1964 National Championship winner for the Tide, Joe Naimath. But he always shows up when his team needs him.

He did it again on Saturday night, creating an opportunity for the school to secure their 18th title win. Should he hoist the trophy in three consecutive Januarys, I think Hurts should be considered as the greatest quarterback in Alabama Crimson Tide history.