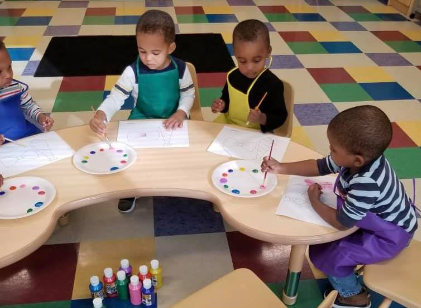 When teaching about Noah’s Ark, instructors at Woodland Park Christian Learning Center in Southwest Birmingham came up with a novel way to explain the lesson.

The teachers and children all joined together “like all the animals came to the ark . . . and we kind of tied that story in,” said executive director Sonya Prater.

The Learning Center is part of The Woodland Park Church of Christ and students are given a general education as well as lessons from the Bible. But there is also fun for the children who are ages six weeks to five years old. Teachers see the importance of academics and the importance of play, Prater said.

“So I like to meet in the middle,” she said. “We’re not too heavy on either side. I think that children should have a healthy balance of both, and creative curriculum which is research based really does help teachers to enforce that.”

Prater said she looks forward to those “lightbulb moments” even within the short few days since they’ve been open the first week of November.

Prater said she loves watching the children learn and seeing them come up to her with smiling faces and giving hugs. “It’s what I went to school for,” said Prater, who has her bachelors in elementary education from University of Alabama at Huntsville and her masters in instructional leadership from University of Alabama at Birmingham, “so this is finally seeing my studies . . . I believe my God-given talent is with children and working with people, I finally kind of see it coming into fruition.” 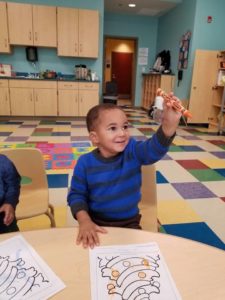 Nutrition is just as important as education, Prater said. Their menus are based on USDA (United States Department of Agriculture) regulations.

“Being healthy, nutrition wise, that’s important as well…it’s very important that we still teach the whole child,” she said.

The classes, held Monday through Friday from 6:30 a.m. until 6 p.m., offer experienced teachers, who have dealt with issues such as it being a student’s first time in pre-school or potty training.

“I make sure we have people in place that have dealt with that so parents really can feel comfortable that they have a knowledgeable person to work with…those particular issues,” said Prater.

Prater said the first floor can hold 180 children and once they get to approximately 75 percent of the first floor’s capacity, they will open their second floor which they hope can be for kindergarten and above since they plan to open a school in the long run.

With it being the holidays, fun was a big part of curriculum last week. On Monday, students wore red and took pictures to give to the parents as a surprise. Tuesday, was Santa’s workshop so the children had to dress like Santa, his reindeer, an elf, etc. On Wednesday, they decorated stockings for each child for their deck the halls theme. Thursday was the Christmas party and Friday’s was “‘twas the night before Christmas” so everyone wore pajamas.

“Even though we’re little people we’re still going to have fun and celebrate it that way. I love it because this is my first year out the classroom so they’re still a part of me,” said Prater. “This time of year I was like ‘ooh we can do this and we can do this’…and we all got together and we had a whole list long of…activities and things we’re doing with the kids cause we were all bouncing off of each other excited about cute little things.”