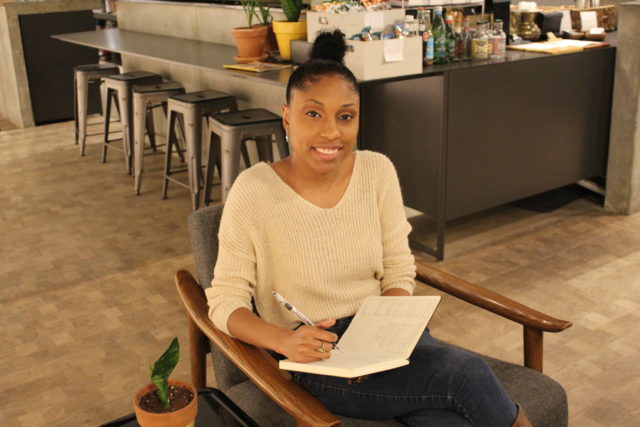 University of Alabama undergrad Alexus Cumbie has found a way to marry her two loves: poetry and politics.

“I never perform anyone else’s poetry, but I have performed the pain that someone has felt before,” she said.

Cumbie, 20, addresses issues that include racial injustice, sexual assault, depression, anxiety, and black trauma—“aspects that can be hard to talk about, she said”—through her poetry.

“When you’re in person and you see a person whose pain is on stage, it’s hard for you not to want to talk about that. … I put my pain, I put the pain of others who are not in the place on the stage.”

Her political side has her considering a future run for elected office, and she hasn’t ruled out mayor of Birmingham.

“People always joke and say that,” said Cumbie, who believes Birmingham is in the midst of a cultural rebirth.

“There’s more support for art than we have had in a long time, so I want to help Birmingham not just for now but to lay infrastructure down for generations after us,” she said. “That starts with increasing literacy rates, investing in educational reform, and funding art programs. All of that is politics and being a political person. I have no issue with politicking in Birmingham.

Cumbie has already laid the groundwork for her political career by interning in the U.S. House of Representatives with Congresswoman Terri Sewell, D-Ala.

“I [researched] legislation, attended meetings with constituents beside the congresswoman . . . attended briefings held by congressmen and Capitol Hill staff, wrote daily press briefs about the congresswoman and gave constituents tours of the U.S. Capitol,” she said in an interview at UA’s Division of Student Life Career Center.

Cumbie said she also got a chance to meet politicians such as John Lewis, Maxine Waters, Nancy Pelosi, Kamala Harris, and other trailblazers in government. 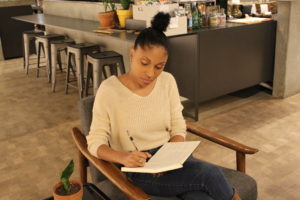 In 2016, Cumbie founded Birmingham’s Literary Vibes, an organization dedicated to increasing literacy rates in low socioeconomic communities in the Birmingham area through the use of poetry, public speaking critique, and fundraising from open mics featuring local artists and musicians.

“We also host poetry and musical showcases, from which 100 percent of the proceeds are donated to organizations throughout Birmingham that are dedicated to increasing literacy rates,” she said in an interview with the Birmingham Times. “Right now, I’m launching a project through which people can donate children’s books with black and brown protagonists to public schools. Our main goal is increasing literacy rates, so we do whatever it takes to do that.”

Literary Vibes gives students the opportunity to have a voice—“A stage, a sanctuary, and a space to just be themselves,” she said, adding that mentoring and literacy are key elements of the program.

“The mentorship part of that is that we [work with] kids in troubled areas and teach them things like how to write, how to read, just to increase literacy,” Cumbie said. “That’s where the literary part comes from, and we use poetry for that.”

The ages of the children she works with depends on where she offers her services. Sometimes they are 5 or 6 and the focus is more on teaching them how to read. When it comes to poetry, she sometimes works with middle schoolers, but her main poetry students are high schoolers.

Poetry can make a difference for at-risk students: “I’ve learned that when you give people the language to express themselves, they’re not as aggressive,” said Cumbie. “A lot of us, especially in the black community, were not taught how to express the pain we feel, so [many young people need to be taught] how to write … or just how to go up to someone and say, ‘Hey, I didn’t like when you did that.’”

Poetry has long been part of Cumbie’s life. During high school, she was part of the Birmingham-based nonprofit Real Life Poets, a group that traveled across Alabama and performed at women’s centers and other venues. She’s traveled across America performing and hosting poetry slams, including at Washington D.C.’s Busboys & Poets, in order to “highlight the importance of self expression, the beautification of political commentary, and the humanity that stems from crowding into a room to listen to a potpourri of narratives.”

Poetry and writing serve as a release to help her “understand the life around her,” Cumbie said, as well as help the audience understand, making it a dual relationship.

“I feel like the goal of my poetry … has always been to offer people a home,” she said. “[I want people who] hear it to say, ‘I feel that,’ ‘I felt that,’ or ‘I know someone who’s feeling that.’ [I want to] just make them feel safe. … I always want people to feel like there’s a call to action at the end.”

It’s nice to make people feel good and happy through poetry, but Cumbie believes serious issues should also be addressed and make people think and say, “Hey, we need to get our lives together, and this is how we can do it.”

“I feel like sometimes the call to action is explicit, and sometimes it’s very implicit,” she said. “Sometimes my hope is that you feel inspired to alleviate the issue I’m talking about. Sometimes I drop names … or a cultural issue that [listeners] should [consider] looking up to [educate themselves.]. Sometimes, … I literally say, ‘I’m glad y’all liked it, but this is how you can help.’”

One example is her poem “A Bouquet of Black Boys,” which is about the shooting of Trayvon Martin and the emotions attached to the news. It was written the night of the shooting, Cumbie said, from “a very emotional place.”

“That was an extremely raw poem,” she added.

Cumbie is the youngest child in her family: she has two older brothers and four older sisters. She attended the Jefferson County International Baccalaureate School (JCIB), which is on the campus of Shades Valley High School.

Her love for poetry may have begun when she started as a rapper during her middle school years, when she was a student at the William James Christian School. Cumbie and her friends would make up rhymes or participate in cyphers, informal gatherings of hip-hop performers, in the back of their classroom. She transitioned into poetry around her sophomore year in high school and believes her rap skills helped with her poetry and vice versa.

During her senior year of high school, Cumbie said she wanted to compete in a poetry contest.

“A lot of people in my inner circle had never seen me perform because I was traveling and performing, so I was like, ‘I need to do something for my Birmingham community as a senior send-off,” she said.

To hone both her poetry and writing skills, Cumbie has written for FRL (Freelancer) magazine, a publication that highlights University of Alabama students engaged in positive activities.

“I definitely think it holds me accountable to writing every day because even if [my work isn’t published], I’m still working,” she said. “At first, I used to write a lot, but now I do a lot of editing, … which has [taught me] how to give constructive criticism [and] helps me, especially with mentoring.”

Cumbie wrote a small poetry column for FRL but has recently taken a hiatus to focus on writing a book of poetry, something she has been thinking about doing since her sophomore year of high school. She got the courage to start after a friend told her to do it now because she might not be able to do so as she progresses through law school.

“Right now, [I have put together] a lot of poems that I have not performed and not published,” she said. “I’m trying to find out if there’s a central thread among them or if I want to cut certain poems from the book and just keep a theme around it.”

Cumbie wants to help as many as she can through her poetry, writing, and mentoring because of her fundamental belief in life: “We should equalize the spaces that we occupy,” she said. “In everything I do, [I try] to equalize the space for someone else.”