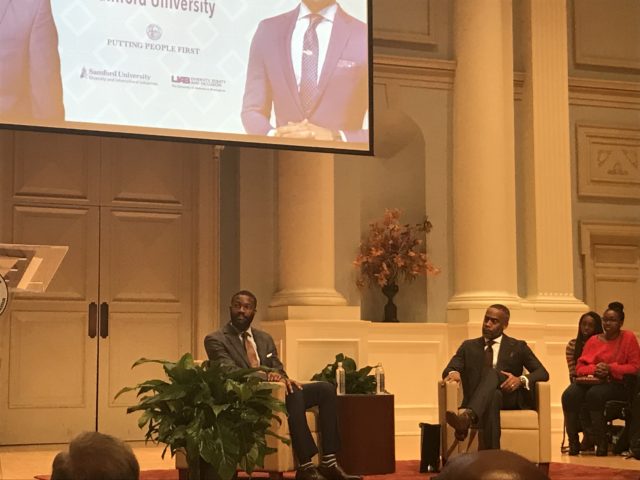 Woodfin stressed that the community must find a way to invest in youth.

“I had a conversation [recently] with boys from Jackson-Olin High School — freshman, sophomore, juniors and seniors – and tried to listen to them and understand what goes on with them and . . .I ended up framing it around not necessarily the choices you make will put you in jail or put you in a casket, but more so do you want to see your mother cry,” said Woodfin.

“I had a problem when I left that room and the thought was ‘these are not the boys that Joe Clark put on the stage in [the film] ‘Lean on Me’, these are the ones that are actually in the classroom, doing the work, no problems. The question dealt with, ‘how do I reach the young people who are skipping school, been expelled from school, hanging out in the street doing things that lead them into trouble by hurting themselves or hurting other someone else’ and that’s what we deal with every day.”

Part of our conversation was not just around enforcement, the mayor said, but more so around prevention of “how do we get young people to make better choices so they don’t end up making bad choices that put them in the street, jail or worse, in the ground?”

The way to accomplish that is through partnership, the mayor said. “The city of Birmingham can’t be responsible for that alone, the school system cannot be responsible for that alone and as much as we want parents to do more for their children, all households are not created equally,” he said. “In the community and collectively we have to be more intentional about how we engage and offer different opportunities for our young people.”

Johnson said adults need to show young people how to have “courageous” conversations.

The award-winning journalist and communications specialist said he loves when grandparents are on social media “because there are people who would not have conversations with their grandchildren if they weren’t on Instagram, but I also think we have to be intentional about storytelling,” he said.

He encouraged people to get their phone and interview the three oldest people in your family and find out what their stories are and “start telling our own stories about our family trajectory.”