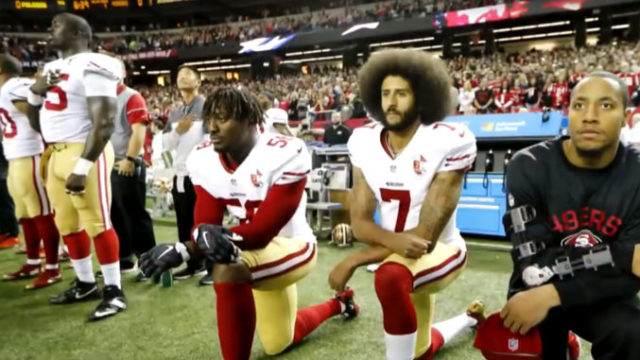 Colin Kaepernick’s more than two year battle with the NFL has come to an end.

The former NFL quarterback and the league have reached a financial settlement in Kaepernick’s collusion complaint against football’s owners.

The settlement comes just one day after it was revealed that the former San Francisco 49er, who led the team to a Super Bowl in 2013, turned down a contract offer to play in a new developmental league.

Terms of the settlement, which also included a payout to Carolina Panthers star safety Eric Reid, were not made public.

Kaepernick was effectively blacklisted from the league after kneeling during the national anthem to protest police brutality and other social ills.

Yahoo Sports reported that Kaepernick and Reid would only settle the complaint if a lucrative financial agreement was reached between the players and the NFL.

The league and Kaepernick’s attorneys released a statement Friday saying the matter had been resolved confidentially.

As part of that confidentiality, it is believed both sides signed a non-disclosure agreement agreeing not to speak publicly about details of the case or settlement.

“For the past several months, counsel for Mr. Kaepernick and Mr. Reid have engaged in an ongoing dialogue with representatives of the NFL,” the statement said.

“As a result of those discussions, the parties have decided to resolve the pending grievances. The resolution of this matter is subject to a confidentiality agreement so there will be no further comment by any party.”

The agreement comes as Kaepernick’s case against the NFL was to set to be heard before arbitrator Stephen Burbank later this month.

Kaepernick had alleged that since 2016, the league conspired to keep him out.

The actions sparked a political firestorm from President Donald Trump and the furor became such a central issue for the league for nearly one year that it instituted a rule that banned protests during the national anthem.

That rule has since been shelved by the NFL and now appears to be dead, according to the Yahoo Sports report.

The NFLPA also released a statement Friday, supporting the settlement between the league and players.

“Today, we were informed by the NFL of the settlement of the Colin Kaepernick and Eric Reid collusion cases,” the NFLPA said.

“We are not privy to the details of the settlement but support the decision by the players and their counsel. We continuously supported Colin and Eric from the start of their protests, participated with their lawyers throughout their legal proceedings and were prepared to participate in the upcoming trial in pursuit of both truth and justice for what we believe the NFL and its clubs did to them.

“We are glad that Eric has earned a job and a new contract [from the Carolina Panthers], and we continue to hope that Colin gets his opportunity as well.”