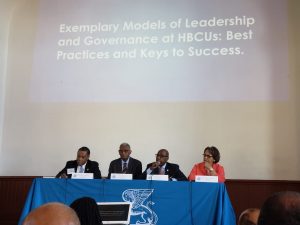 ATLANTA— The leadership of Sigma Pi Phi fraternity — also known as the Boulé — has made good on its promise to focus its attention on the current state of the nation’s historically Black colleges and universities.

The focus, which has gained momentum under the leadership of Dr. Gregory J. Vincent, was on full display last week, when the fraternity hosted a day long forum at Morehouse College dedicated to strategizing and providing best practices on how to recruit, retain and graduate Black students from these storied institutions.

Three panels included experts on HBCUs who also focused on leadership and governance, professional schools and federal, state and external challenges and opportunities for HBCUs.

“I’ve been a member of the Boulé for several decades and the Boulé is making a focus on HBCUs and I think that’s an appropriate focus,” said Scott in an interview with Diverse. “HBCUs provide a significant portion of higher education opportunities for minorities and for African-Americans and we need to make sure that they stay alive, particularly in light of the attacks on affirmative action that are going on now in the courts.”

Dr. Michael Lomax, president of the United Negro College Fund (UNCF) said that he has been a member of the Boulé for three decades and said that the UNCF has a strong relationship with the fraternity, manages a scholarship for them and has partnered on a number of philanthropic initiatives, including one in Dallas.

“What I am excited about is that this is really such an extraordinary network of high achieving African-American males who have influence all around the country,”  said Lomax. “They’re beginning to look at how strategically to leverage their influence on behalf of issues they’re concerned about and higher education is one of them.”

As the nation grapples with a student debt crisis, HBCUs have been hardest hit, said panelists who said that philanthropy to these institutions have to be a central focus moving forward.

“Philanthropy has to be taught,” said Dr. Otis Moss, Jr., the civil rights stalwart, who attended Morehouse College and worked alongside Dr. Martin Luther King, Jr., during the civil rights movement. “It does not come automatically.”

Dr. David Wilson, president of Morgan State University reminded the audience that on the campuses of  some HBCUs, many of the buildings bear the names of Carnegie, Rockefeller, DuPont — White philanthropists — who donated dollars to keep these institutions alive.

He said that today, wealthy African-Americans should assume that mantle.

“HBCUs are open for million dollar investments from Black millionaires. We don’t want Black millionaires in entertainment and sports and industry to not see an investment opportunity in HBCUs that White multi-millionaires saw a 100 years ago,” said Wilson. “I think that would be a terrible missed opportunity if this wealth that is being accumulated by Blacks doesn’t eventually make its way back to HBCUs.”

For years, the Boulé which was founded in Philadelphia in 1904 by a small group of physicians and medical professionals largely operated behind the scenes. But that is changing, as the fraternity has become more vocal on social justice issues.

Recently, it has partnered with Emory University to house its modern archives (the older archives are housed at Fisk University) and to digitized editions of the Boulé Journal, which is one of the oldest continuous African-American publications.