By Kathryn Sesser-Dorné
The Birmingham Times

Dalvin McCollum, a rising fifth grader at Avondale Elementary School, didn’t have to think long about what to do when asked to design a project based on a book his teacher assigned to his class.

McCollum, 10, used his love of comics to create a newspaper, “B’HAM NEWS,” that included an article, a drawing of the 16th Street Baptist Church, and a comic strip based on “The Watsons Go to Birmingham 1963.”

“One good reason is because I knew I could draw, so I just wanted to do that for fun,” Dalvin said about why he chose to make a newspaper. “And then I really just wanted to write something about it.”

“The Watsons Go to Birmingham 1963,” about a family in Michigan who finds themselves in Alabama around the time of the 16th Street Baptist Church bombing, is fictional. But author Christopher Paul Curtis based the book on members of his family and many events in the first part of the book are based on his childhood.

“I just liked the book. Some parts made me confused … some parts were funny,” McCollum said.

“There’s this little boy, his name was Kenny. Somehow he thought his sister was in the 16th Street bombing, but somehow she got out … someone took her out before the church blew up.”

McCollum said that part was a little confusing, as well as how someone was able to get the bomb in the church in the first place. But it also made him think about that era in time, and how Birmingham played a big role in the fight for change.

students to create characters made out of dough, short stories, and even a board game. Michelson has helped McCollum become more confident this year as well.

“She showed me that if I try my best, I can do something. I can do it.”

The son of Dalvin and Jacquelyne McCollum says his family has also inspired him too.

“They just support me if I mess up,” he said. “And they help me when I’m doing stuff.”

Comics come naturally to McCollum, and he likes to draw things that amuse him.

“That’s my favorite thing to do when I’m drawing,” McCollum said. “I don’t do superhero comics, I just like to do funny ones.”

“I don’t think that’s going to be my thing,” McCollum said when asked about a future in newspapers.

Despite his venture into journalism, McCollum doesn’t see that as his career path, but he does hope he’ll be able to make a living with his art.

“I want to be a character artist for cartoons, or something like that. Or just draw.”

After creating what he did after reading “The Watsons go to Birmingham 1963,” he also hopes that seeing other artist’s works might inspire him as he continues to hone his skills.

“I just asked my Mom when I walked in could I get a book,” he said about the graphic novels that the Avondale branch of the Birmingham Public Library had on hand.

He also hopes to follow in his mother’s footsteps and attend the University of Alabama at Birmingham. “I think it’s just a good college.”

McCollum said he will continue to study about Birmingham’s involvement in the civil rights era, and the Sixteenth Street Baptist Church bombing.

“I like history. I think it helps me learn about my past.”

But for now, he’s just focused on being out of school for the summer. 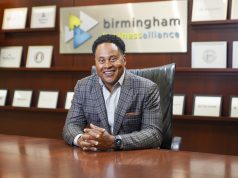