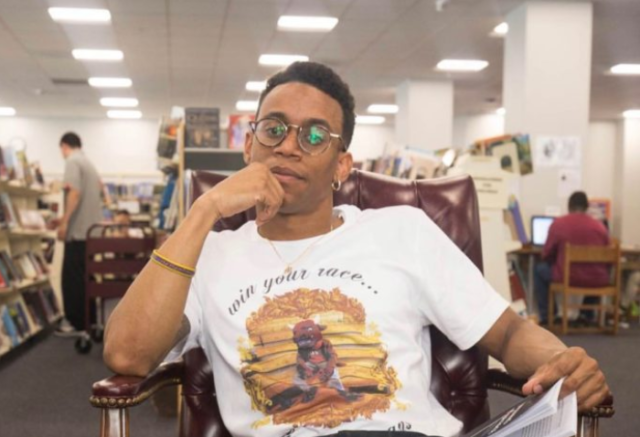 When Khalil Saadiq left Howard University three years ago, he wanted other students to learn from his experiences, so he took two steps: he wrote a book about what he went through, and he created a scholarship for students at the university.

Saadiq acknowledges that he didn’t leave the institution under the best circumstances; he calls it a “scholarship situation.” Nonetheless, he’s used that situation to help himself and help others.

Saadiq, 24, from Center Point, published “Winning Your Race: Unconventional Truths from a College Dropout” digitally in February 2018 and in print March 2018.

“It’s the book that will read you,” he said of his work, which gives readers effective tools to examine what they have going on in their lives, determine whether they’re happy, and decide how to continue forward.

Though he doesn’t categorize his book as self-help, Saadiq believes “anyone who reads it is helped.”

“It’s going to provide you with a skill set to improve, … [as well as] the awareness and perspective needed, … in such a way that you’ll love the result just as much as you love the process,” he said.

Saadiq attended the Alabama School of Fine Arts during his freshman year before transferring to Hoover High School, from which he graduated in 2013. He then went on to Washington, D.C., to attend Howard University, where he was an economics major with a business minor.

“I wanted to be a lobbyist, but I also had general understanding that black economics and financial freedom were essential to us making progress in our communities,” he said.

Following his scholarship situation, Saadiq left Howard to join the U.S. Army in 2016 and has been in the military for three years now. His father was also a military man, and Saadiq said it was something he needed.

“I’m the oldest of four,” he said. “At the time I left school to come home, it just wasn’t in my family’s budget, so I kind of put pressure on myself, like, ‘I need to bounce out as soon as possible.’ The military was going to give me a career, feed me, educate me, and train me for a skill, so it seemed like the best option.”

That decision worked in more ways than Saadiq imagined. The military helped him with time management and discipline. There were days when he would wake up at 4 a.m. and not finish until 6 p.m.

“The amount I would get done in a day before 10 a.m. is more than what I would have accomplished in an entire day as a civilian or a student—and my day would just be getting started,” he said.

Another benefit: “I wouldn’t have pushed myself to write a book had I not been in the military,” Saadiq said.

“People reached out to me [and said], ‘You’ve had a phenomenal impact on me since you were a student, and I hope this doesn’t stop you from being that person.’ I didn’t see myself that way, but obviously several of my peers did,” he said. “Being [back] at home I realized that people held on to my words, … [which] people could take with them and go other places.”

Saadiq’s presence on Twitter also seemed to resonate with many of his followers at @khalilmsaadiq, so he decided to expand his writing to a book format. He had always been an avid reader but wasn’t a fan of the self-help genre.

“I sort of had a chip on my shoulder about self-help books,” Saadiq said. “I feel as if a lot of them want you to [subscribe] to a certain mentality in order to be successful. … Every reader doesn’t have the capacity to take that grain of salt and separate what can be applied and can’t be applied. Self-help books create mindless followers, and I didn’t think that was cool.”

His book is different, he said.

“I’m not telling you necessarily how to go about finding the things you need within yourself. I’m just telling you the things you do need … [and that] you should go for them. … My book abandons the structure a lot of self-help books utilize; it opts, instead, to promote strong pragmatic principles and provide wider guidelines for achieving goals.”

Saadiq said he went through a phase in his life when he wasn’t getting what he wanted until he realized “the first thing you have to do is be real and understand, ‘I don’t like my situation.’ Then ask yourself how you can change it and propel yourself through that moment.”

While writing his book, Saadiq learned many lessons, some of which were humbling.

“I had a moment when I was writing it, and I was listening to a podcast about another author who was wildly successful,” he said. “The first five minutes of the podcast were just them talking about how wild this author’s success was, how it was unprecedented, how he would never do anything as successful as this book he wrote, … how many languages this book was in. I just turned it off.

“I was like, ‘Wow! Who do I think I am? … I’m a college dropout from Birmingham, Ala. No one is going to want to listen to what I have to say.’”

“If I don’t proceed forward with absolute faith in the things I’m going to do, I might as well not do them,” he said. “So, I reattacked the book. From there—having the book and self-publishing it—[I was] able to ultimately give a scholarship based on the book and help change the life of a young woman,” scholarship recipient Rozalyn Wingate.

Saadiq said he had to give a scholarship “because … I felt as low as ever when I lost my scholarship to Howard University.”

“I realized that an 18-to-22-year-old really shouldn’t have to go through something like that, [so] I want to do what I can to help, even if it’s a small part,” he said. “In the grand scheme of things, $1,000 isn’t a ton of money, but … it can add six more weeks to how you can eat, it can let you go on that study-abroad trip, it can help you send that money to your family so you don’t have to worry.”

Saadiq’s first scholarship was awarded in May 2018, and he plans to give out another in the near future to Howard University students in their sophomore or junior year.

“It was really to help students who were in the financial situation I was in: you’re in school, taking classes, and need to continue but don’t have the funds,” he said. “I just want to help everybody become better versions of themselves.”

“Winning Your Race: Unconventional Truths from a College Dropout” is available at Amazon.com (search for the book title). You can follow Khalil Saadiq on Twitter @khalilmsaadiq.