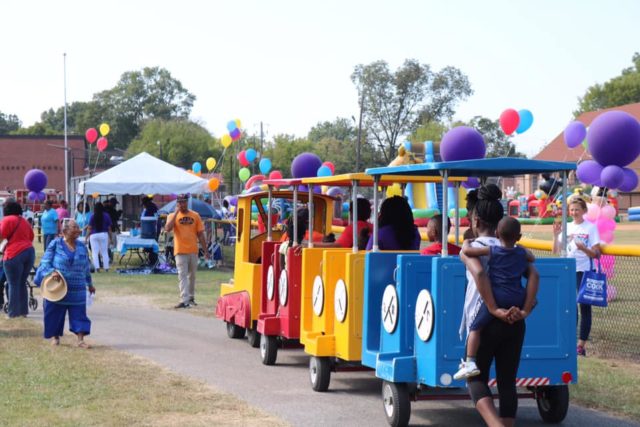 Over 100 motorcycles converged on Ensley Park on Saturday for the 13th annual Party With a Purpose hosted by Councilor Steven Hoyt.

This year’s event culminated in a massive display of roaring engines and bikers from local clubs as excited children cheered and watched them ride through the park. It was an amazing sight to see thousands of people come out and enjoy the purpose-driven festivities that serve as a yearly reminder of what community is all about.

While the event was started 13 years ago, it has ballooned into something bigger than even Hoyt had originally imagined. The day brought together over 150 partnerships and sponsors from organizations such as The National Association for the Advancement of Colored People (NAACP), Alabama Power, voter registration booths, a mobile blood donation center, health screenings and much more. It should be noted that the event is absolutely free and open to the public. Thousands of hot dogs, chicken wings, ice cream sandwiches and all kinds of food were given out to anyone willing to come and enjoy the party.

Perhaps most importantly, there were a plethora of job fair opportunities for individuals to be able to not only apply for positions with major companies, but there was also an area for people who needed help putting together and printing resumes for other jobs.

“Last year we had over 30 people give blood,” Hoyt said. “That’s very significant because

one pint of blood can save up to three lives. We’re trying to do our part.”

“The first year we just got people out here and let them know we love them,” Marino said. “Now we have a way for people to get their eyes checked, their cholesterol, blood pressure, all of that… . We take care of everyone here, ages one to 100. I believe in what we’re doing. Six years ago I branched out to do Education With A Purpose. So far we’ve given $55,000 in scholarships to seniors within the Birmingham City School system.”

Hoyt and others took to the stage to give away televisions, microwaves, bicycles and all sorts of prizes that people had entered their name to win. A young woman’s name was called in the drawing for the television and the excitement on her face reminded Hoyt of what the event is all about: giving people an opportunity to access things they didn’t have before. And that, he said, is his real purpose in life.