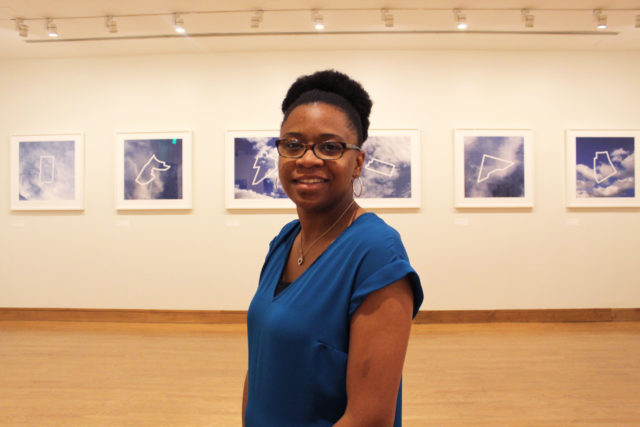 In the 1930s, the Federal Housing Administration began to systematically deny mortgages to black, Latinx and Jewish residents. This process became known as redlining because banks and government officials drew red lines on housing maps to single out African American and Latinx neighborhoods deemed as unworthy of investment.

Though redlining officially ended in 1968 with the passage of the Fair Housing Act, Birmingham photographer Celestia Morgan sees traces of these policies and practices drawn all over the neighborhoods of the city she calls home.

Morgan’s exhibition REDLINE is now on display at the Birmingham Museum of Art through Feb. 16 in the Pizitz Gallery. It explores the impact that housing discrimination of the past continues to have on communities of color today.

“We are more diverse here in Birmingham than we have ever been and I’m glad to see downtown is booming,” Morgan said. “But we still have communities that are falling apart and they feel that they are being forgotten.”

The exhibition includes photographs of homes in Norwood, North Birmingham, Southtown and Ensley.

On Oct.15 at 6 p.m. the Birmingham Museum of Art will host a panel discussion on the historic, systematic practice of racial housing discrimination featured in REDLINE. Confirmed panelists include Morgan, local activists Odessa Woolfolk and T. Marie King, and attorney and community organizer Richard Rice.

Morgan, 38, who grew up in the Central Park area of Ensley, hopes her work will help shed light on a number of issues facing some of Birmingham’s predominantly black neighborhoods including gentrification and pollution.

“They pay taxes just like everybody else,” Morgan said. “Can we get assistance to them?”

Furthermore, Morgan is troubled by the vast number of title loan businesses and fast food restaurants in these communities.

“Is that what we’re offering and providing for these families?” she asked.

Hallie Ringle, the Birmingham Museum of Art’s Hugh Kaul Curator of Contemporary Art, was instrumental in bringing REDLINE to the museum.

“I’ve been wanting to work with Celestia for a while,” said Ringle, who came to the museum in 2018. “She is an incredible artist and her work is really visionary. She is from Birmingham and is making work about Birmingham and the museum has been really focused on finding topics that are important to the city as a whole.”

The Path Before Us

Part of Morgan’s exhibit focuses on Interstate 20/59. The interstate, built in the early 1970s, bisected black neighborhoods and separated them from the city center and predominantly white neighborhoods. The interstate’s placement displaced many residents in its path and caused property values to drop.

Currently, the interstate is being rebuilt at a higher elevation to ease traffic flow to and from downtown, which Ringle believes makes Morgan’s REDLINE even more timely.

“Every neighborhood in Birmingham was affected by redlining, but I think that maybe not everybody knows why 20/59 cuts through Birmingham the way it does,” Ringle said. “It was very intentionally planned to prevent access, to make property values plummet for black neighborhoods in Birmingham. So, it seemed like the right time to engage this conversation when this construction is happening right in the museum’s backyard.”

In this construction, Morgan finds a metaphor.

“It’s in the same spot. We’re repeating the same thing. We’re modernizing it a little bit, but we’re actually doing the same thing,” Morgan said.  “We no longer use the map anymore, however, we’re still moving and operating in this path that has been laid out for us.”

Morgan believes she inherited her love for photography from her father, who died in 2005.

“When my father passed, we were looking for images of him and we realized that he was the guy behind the camera,” Morgan said. “He would give me one of his old cameras and I would go around and start to photograph.”

As a student in junior ROTC at Jackson-Olin High School Morgan would use a 35mm camera to take pictures at events like Birmingham’s Veteran’s Day Parade. She’d also take portraits of the kids at the day care center her mother owned for their parents.

Morgan went to college at the University of Alabama at Birmingham (UAB) to study elementary education. But after one photography elective she realized this was more than a high school hobby.

“I fell in love and I changed my major,” Morgan said. She would go on to earn a Master of Fine Arts degree at the University of Alabama in Tuscaloosa.

“The pictures that I take are me speaking from within,” Morgan said. “That is my voice. That’s how I communicate to not only my family, but to the community and to the world.”

Morgan’s work has been featured at the Ogden Museum of Southern Art in New Orleans and is a part of the permanent collection at the Crystal Bridges Museum of American Art in Arkansas, which was founded by philanthropist and arts patron Alice Walton, daughter of Helen Walton and Walmart founder Sam Walton.

When Morgan began taking photographs of Birmingham’s neighborhoods, she didn’t set out to make a political statement. It was personal.

“The first intent was not to create art about redlining,” she explained. “It was for me, exploring why my family only lived in a certain part of Birmingham. And I wanted to capture memories for my family, take pictures of houses that my grandmother lived in or my aunts and uncles lived in.”

But as Morgan saw both dignity and dilapidation in the neighborhoods she photographed, she started to think bigger.

“How can my story help somebody else?” she began to ask herself. “How can I connect it to something greater than what I am?”

The Sky Is The Limit

“As I started to dig into the history of redlining, I started to think we’re still almost living in the same pattern or system that was established a long time ago,” Morgan said. “But there’s still hope for these communities if we put our resources towards these communities instead of forgetting about them, pushing them aside or only fixing the communities that are closer to the downtown areas.”

For one part of the REDLINE series, Morgan places the outlines of Birmingham neighborhoods redlined in the 1933 Home Owners’ Loan Corporation map against photographs of blue skies.

“My mother would tell me the sky is the limit,” Morgan said, adding that her mother would also say, “You can be whatever you want to be in life.”

Morgan wants people of all neighborhoods to have this type of optimism for the future.

She wants them to look at her photographs and think, “The same sky is blue in Mountain Brook like it is in Woodlawn and that means I have the potential to do good as well. So, don’t forget about me.”