JD Weeks has a collection of more than 40,000 postcards that portray Birmingham and Jefferson County, but the first came by accident, he said.

“I can’t remember exactly when it was, but I bought an old book at a bookstore somewhere downtown Birmingham,” the Gardendale resident recalled. “I bought a book for a dollar, and it had a postcard. I found that, and it got me started.”

That card—depicting a rainy day in downtown Birmingham around 1910—was the first of a collection that now exceeds 40,000, thousands of which illustrate scenes in Jefferson County.

“I’ve got some stored that I will never have time to look at,” he said with a laugh. “But I can’t make myself not keep them. It’s a disease.”

His wife Linda chimed in.

“He’ll have two or three of one, and he’ll find somebody really interested in collecting,” she said. “He may give it to somebody, but he’s never sold one.”

JD added, “I’ve refused to sell a postcard, but I’ll give them away sometimes.”

Linda is supportive of her husband’s hobby, so she agreed to allow space for him to store his treasures when they built their home in Gardendale. Most of the postcards are stored in the basement, others are in his home office, and still others in a hall closet. 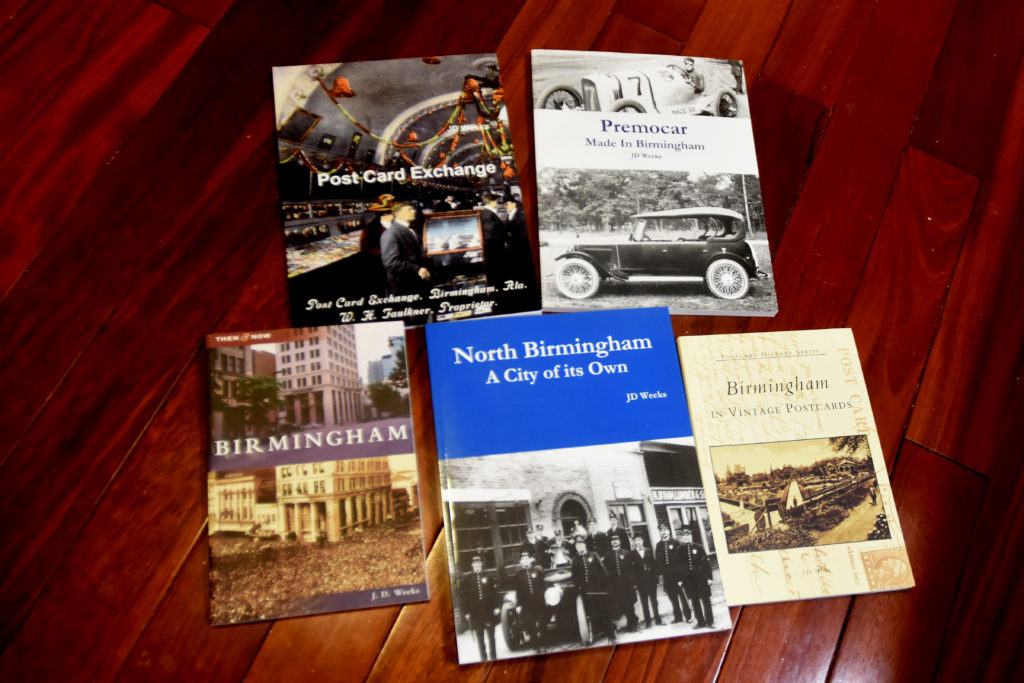 Weeks’s first postcard, the one he found in that $1 book, shows someone walking across the street in downtown Birmingham near St. Paul’s Cathedral on Third Avenue North; the scene includes a streetcar, a horse, and buggies. He also has vintage postcards showing a streetcar stop near the entrance of East Lake Park; an aerial view of the old Parliament House Hotel on Southside; a generations-old image of the cafeteria at what was Phillips High School; and the corner of Third Avenue North and 18th Street, showing the Lyric Theatre before the Alabama Theatre was built. Among his favorites is one of Opening Day at Rickwood Field in 1910.

Weeks, 82, regularly posts images of his postcards on his Facebook page. One, for instance, features a photo of an A&P store next to North Birmingham Bank.

“The building was modified later,” he wrote in the caption, “and a drive-through teller took its place.”

The collector published a book, “Then and Now Birmingham,” which was sent into space in 2009. The mother of astronaut Mike Fincke was a postcard collector who had exchanged cards with JD for 15 to 20 years.

“The family gave JD an address in Houston to send his book and postcards so they could be sent to astronaut Fincke,” Linda said. “It was inspected before it was sent into space.”

When the space shuttle docked with the International Space Station on March 17, 2009, Weeks’s book was unloaded with other cargo.

JD said, “While onboard, my book and other items I had sent were stamped with the official International Space Station seal. During the stay, my book traveled 50 million miles. I get dizzy thinking about it.”

Weeks has published other books, including “Birmingham in Vintage Postcards,” “North Birmingham: A City of its Own,” “We Lead the Way: Ducimus Viam,” and “Post Card Exchange.” He also published “Premocar: Made in Birmingham,” about an automobile manufactured in Birmingham.

Weeks’s collection of Jefferson County memorabilia is not limited to postcards. He has an assortment of city seals, including those from areas like Irondale and others that have since been annexed into Birmingham—North Birmingham, Pratt City, Graymont, and Elyton, which preceded Birmingham as the county seat of Jefferson County.

Weeks noted several county landmarks that he misses, including the Birmingham Terminal Station, once the city’s principal rail station; Ed Salem’s Drive-In, a fast food restaurant located on 26th Street North; the Alabama State Fairgrounds, exhibition grounds and a recreational park in Birmingham’s Central Park neighborhood (now home to the Birmingham CrossPlex) that served as the site of the annual Alabama State Fair; downtown department stores like Loveman’s and Blach’s, which featured vibrant Christmas displays; and the Joy Young Chinese Restaurant on 20th Street North, which was founded by the first Chinese family to settle in Birmingham.