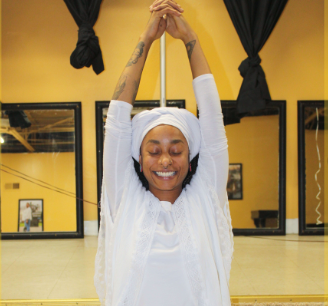 The new year signals a new start, making resolutions popular for many. The goals people set range from learning new skills to giving up bad habits, but the most common ones usually involve health and wellness, whether through exercise or diet. Here are some words of wisdom from a Birmingham metro area wellness expert to help you improve your physical and mental health in 2020 and beyond.

Dressed in all white, Phree, a 28-year-old Birmingham-based yoga instructor, brings a pure and light love as well as the art of yoga to the classes she teaches at The Hub in downtown Birmingham and Riviera Fitness Center in Center Point.

Many see the new year as a time to create a healthier version of themselves, and Phree was no different. Black women often have issues with their reproductive organs, and Phree was one of them. That was one reason she changed her diet at the end of 2015.

“It wasn’t like a conscious decision at first. I just tried it,” she said. “I was getting cysts and having a heavy menstrual flow, so I was like, ‘Let me do something natural.’ … When I did that, the cysts went away and my [menstrual] cycle went from being super-heavy to three to four days.”

A diet change usually calls for a lifestyle change, and that meant Phree’s life wasn’t the same anymore.

“I started hanging out with different people, and they were practicing yoga, so I was like, ‘OK, let me try it,’” said the Tarrant resident.

When Phree first started practicing yoga, she noticed “the way it unlocked me and opened me up. I had to share it,” she said.

Being a black woman, a woman of color, she didn’t see many instructors that looked like her. That lack of diversity can cause some to shy away from partaking in yoga or wanting to be an instructor.

“You feel like maybe it’s not for you,” she said. “I was often told that yoga is not for black people. … I know who I am, I know I have a magnetic personality, I know that people gravitate toward me, so if somebody’s going to come to me, I might as well have something good for them. I really wanted to share the practice and how it really created a new way of life for me. I wanted to share that with everybody.”

Phree first enrolled at Birmingham Yoga, where she earned her 200-Hour Yoga Teacher Training Certification and will take the test later this month to become a registered yoga instructor.

“Next was just getting comfortable safely leading people through postures and sequences,” she said. “I would practice teach my friends, family members, and random people in the park. The best part is when the little babies show interest and want to practice with me.”

Phree has worked with children as young as age 5 and seniors at the Brookdale Senior Living facility, where she taught chair yoga.

“Each experience is a new one, and I like to tailor my classes to the students’ needs and wants in that moment,” she said. “Making YouTube videos has helped a lot, too, having to go over and do voice-overs really allowed me to improve my practice. That made me a better instructor.”

Phree started her first free yoga class at Patton Park, off the Tallapoosa exit of I-20/59.

“I called it Karma Yoga, which means to do a service completely free of charge and expecting nothing in return,” she said. “Several men and women came to my class and did yoga for the first time. A lot of them opened up and relaxed in the moment.”

Phree was given an opportunity to then take over the Mela-Zen Yoga class (melanin-centered sessions that focus on relieving minority stress), taught by local yoga instructor Tori Wolfe-Sisson at The Hub.

“Rapidly and humbly, I grew,” said Phree, who was then offered an opportunity to instruct at the Riviera Fitness Center in Center Point.

Phree’s yoga classes are relaxing and intimate, for those who want a calmer, light workout. She also incorporates scented oil, incense, a candle, and a sound bowl to incorporate the senses. The sound bowl gives the class something to focus on while also helping them vibrate at a certain frequency before the class is over. The oil, incense, and candle help the class relax through scent, which is beneficial as she rubs the oil on her hands right before adjusting your body.

“Yoga means union. It means to yoke and to unite, so what we’re uniting is our mind, our body, and our spirit,” said Phree, adding that that yoga is not just the asanas, or the postures.

“It’s meditation, it’s breathing, it’s the asanas, it’s reading, it’s studying,” she said. “Yoga is a combination of all things.”

There are many different types of yoga, including Ashtanga, Kundalini, Yin, Restorative, and Kemetic. Phree’s favorite style is Kundalini, which causes a person to clean their inside out—and once she started, she was not the same.

“We often hold a lot of trauma at our roots, so Kundalini raises the dormant energy that’s lying at your root, … to bring it up so you can project [positive energy],” she said.

It is important to note, Phree said, that yoga is for everyone—all sizes, all ages, all genders, disabled people, senior citizens, pregnant women. For those who can’t stand or have a hard time standing, there is chair yoga. For those who are pregnant or have children, there are prenatal and “mommy and me” classes.

“Yoga is my benevolent friend,” said Phree. “It heals me, holds me up, picks me up, energizes me, relaxes me. It allowed me to acknowledge my triggers and attack them head on,” specifically through practicing Kundalini yoga.

Yoga, she added, centers “her being” and can also help center the mind, which means it can help people with mental illnesses, depression, or anxiety.

“It allows you to be in the present, be in the now versus being everywhere else,” said Phree, noting that she has been an instructor since August 2019 but has been a student of yoga since 2015, after she decided to become a vegetarian.

For the spirit, yoga keeps a person in their peace, she said: “I believe that if you have that, no one can take it from you.”

Yoga has helped her when it comes to endurance, she said. It has toned and kept her body in shape; it keeps her skin glowing and her hair growing. As for healthy eating, she feels yoga keeps her metabolism at a steady pace, so she’s not worried about eating a donut.

Her favorite posture is Balasana, also known as Child Pose, which is a relaxing and restorative posture.

“I can deeply breathe, I can feel my womb, I can feel my body when I’m there,” she said. “It often causes me to snap back into wherever I am. … It’s really grounding for me. I believe that if you have that, no one can take that from you.”

“If you regularly practice for a week straight and then go two days [without], you’re going to feel that,” she said. “So, it allows you to keep up with yourself.”

Additionally, each yoga pose has a purpose: “Each posture brings you into the next,” she said.

“If you start doing yoga and go into the practice without doing the … sun salutations and just go and do a headstand, you’re not warmed up. … The order is to get you warmed up and prepared for the next posture.”

The order is important not only because each posture gets you ready for the next but also because of the breath work that’s incorporated.

Phree said, “You don’t exhale your arms up; you inhale your arms up. … Every posture goes with a breath. … There’s a certain type of breath work that you’re doing with yoga.”

The breathing affects one’s ability to get into a posture fully; it helps you relax into a posture. She added that it helps people physically release air to fold their body. For example, with some downward postures, where the head is lowered, you want to make sure to ride the exhale upward, so you don’t get lightheaded.

It is best to do some form of yoga every day, if you are able, Phree said.

“Yoga is like brushing your teeth,” she said. “You brush your teeth every day, so you want to brush your body every day, even if … you just come to your mat and sit. Making it to the mat is the most important part. Once you make it there, you’ll feel around a little bit. Next thing you know, you’ll end up doing a practice.”

One reason people find it hard to work out is because they don’t feel they have the time, Phree said. Although it’s best to make time for your health, if you simply don’t have an hour to spare, it takes roughly 15 minutes to do the sun salutation A and sun salutation B three times each; give yourself five minutes for the savasana.

“If you don’t have time to do that, … just sit and breathe, just intentionally breathe,” she said. “During another exercise, pranayama breathing, you alternate nose breathing. Doing that for four minutes a day will also change your life.”

Meditation is also a big part of practicing yoga. It may seem as if those who practice yoga are always so Zen and positive, but Phree encourages people to “come as you are,” even if you just had an altercation or you’re upset.

“We as yoga instructors are only here to hold space,” she said. “That’s why we have to keep our energy in a place where we can hold the space.”

Overall, Phree gives credit to the Most High for giving her yoga, which is not only how she keeps her body moving—“Yoga has been my therapist, my psychologist, my prescription,” she said.

Phree also practices Reiki, a form of energy healing that can be helpful for those who want to focus not only on physical and mental health but also on energetic health.

Just like any other activity or form of fitness, there are some precautions when it comes to yoga. For women on the first two to three days of menstruation and or those who are pregnant, it’s recommended that they do not participate in Breath of Fire, during which you pump the navel center and apply certain body locks.

Menstruating women also are advised to not do inversions, during which the feet are above the head. Phree added that you always want to ground down fully in your hands because wrist issues can occur if you move through poses carelessly.

“That’s why often you hear yoga instructors say, ‘Really ground down through your hands, spread the fingertips, make sure the hand is all the way flat,’” she said. “The reason I emphasize your hands more than your feet is because [your hands are] delicate. … If I’m sending you attention and bringing your awareness … to your hands and your wrists, naturally you’re going to shift that weight into your feet. … Our bodies will naturally adjust.”

For more tips from experts on health and wellness going into the new year, click one of the links below.

Rob Ginwright’s Myriad of Injuries Lingered — Until He Practiced Yoga

This post was updated on January 3, 2020 at 1:16 p.m. to correct that Phree is not a registered yoga instructor yet.