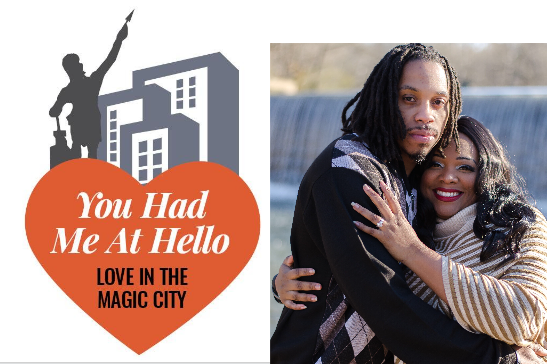 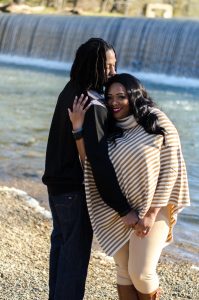 Met: In 2007 at a mutual friend’s apartment in Homewood. Rodney was visiting and Catlann was moving in. “…I didn’t know her yet, but when she walked in I hopped up to ask her if she needed help with her bags…she didn’t like me at first,” Rodney laughed.

Catlann doesn’t deny it. “I wasn’t interested at first, but as time went on we became best friends,” she said. “I actually helped him get recruited [into] the US Army. I was already in, I had joined at 17… and during that time, Rodney was not in a great place in his life and I [suggested] he join the military and get his life on track, and he did.”

First date: At Applebee’s while they were on duty at Camp Atterbury in 2009 in Indianapolis.

“We were off duty [for the night] and [wanted] to hangout so we met up at the gas station and were going to go to Applebee’s from there… and without warning I kissed her, and she stepped back and asked me what was that for… I wanted to make it [become a couple] official [but didn’t say it], and then we went to Applebee’s and kicked it,” Rodney said.

Catlann said she was caught off guard by the kiss because “we were friends but never took it there, so when it happened I guess I was confused. I liked him, and I guess he liked me too,” she laughed.

The turn: April 1, 2010. “We were still friends and at this point I had an apartment to myself [in Homewood], and our friends were over and made out a contract for us that said ‘Rodney and Catlann will no longer play games and will officially be boyfriend and girlfriend because y’all are getting on our nerves’, Catlann said. “We [she and Rodney] signed the contract at midnight when it turned April Fool’s Day.”

The proposal: Thanksgiving Day 2015, at Catlann’s grandparent’s house in Florence, Ala.

“Everybody knew I had the ring but her. I asked her dad for his blessing and I talked to her mom… When I proposed, [Catlann] was in shock because we were at the dinner table praying, and getting ready to eat, and I was kind of playing with fire because everybody was hungry…,” Rodney laughed. “Her mom asked me if there was anything I wanted to give thanks for and that set up the table for me to propose.

“I was even mad that he took the floor to ‘give thanks’ because I was hungry,” Catlann laughed. “But when he proposed, I was very nervous, and I gave him my right hand instead of my left and we all just burst out laughing. I was excited because the week before I was just talking with my friends wondering if he was ever going to ask me to marry him…”

The wedding: Unity Christian Church in Alabaster, officiated by Bishop Sylvester Mixon. The colors were red, black and white. 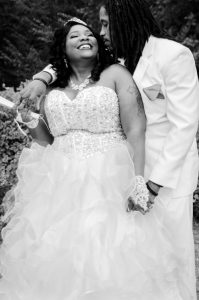 Most memorable for the bride was when they braided the unity rope. “It stood for what we were in God with our relationship. Ecclesiastes 4:12 ‘Though one may be overpowered, two can defend themselves. A cord of three strands is not easily broken.” And that was the reason behind the rope and I was excited because I knew that once we were married, with God (the third strand) we could defeat anything,” Catlann said.

Most memorable for the groom was when he first laid eyes on his bride.

For the honeymoon, the couple went on a cruise to the Bahamas

“It was our first cruise, and when we took off and got out of the country, the water was really blue and we saw dolphins jumping.  It was real beautiful and awesome,” Catlann said.

Words of wisdom: “Have each other’s back, be there to support each other,” Rodney said. “Be each other’s comfort zone, be each other’s relaxation and enjoy one another. It’s just us against the world. Never let challenges get too big, it may be a giant for one person, but can be easily defeated by two people, you and your partner. And, you gotta be patient and understanding. Talk it out, express your feelings and see if you can find some middle ground.”

“Besides God, put each other first and always be truthful with one another no matter the situation,” Catlann said. “We have an open door policy, no locked doors. Don’t give the other person room to think there’s something going on when there’s not, don’t put yourself in compromising situations, and love even when it’s hard. Sometimes you need to get advice from people who have more wisdom than you. Have somebody [in your life] that understands and knows how to keep a marriage going.”

Catlann, 31, is a Hoover native and Hoover High School graduate. She attended Virginia College (Homewood) where she earned a culinary diploma. She works as a paralegal for Norris Injury Lawyers based in Birmingham and had a Makeup Artistry business called ‘Cattystrophic Glamour Services’.

Rodney, 35, is an Alabaster native and graduated from Thompson High School graduate. He earned a Specialist Certification in Personal Training and Strength and Conditioning from the International Sports and Science Association [ISSA]. He works as a Construction Worker for Forterra in Pelham, and does personal training at Gym Time in Alabaster.