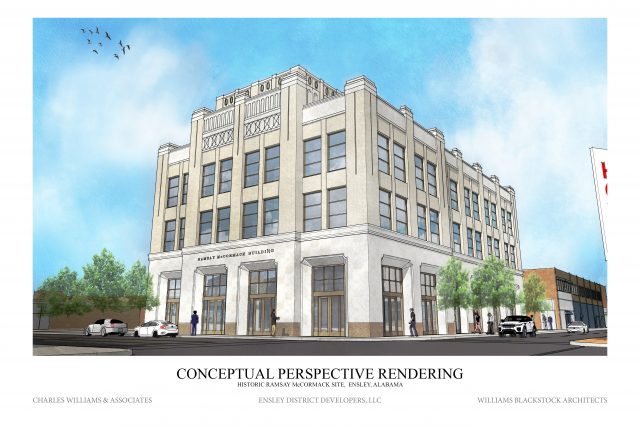 The Ramsay McCormack Building in downtown Ensley will be demolished and replaced with a four-story, 30,000 square feet structure.

The City of Birmingham this week announced a work plan for redevelopment of the 10-story building in a status report detailing completion of Phase 1 of the Redevelopment Agreement by Ensley District Developers (EDD).

EDD could break ground by August 1, 2020 with an estimated completion date of September 2022.

EDD partnered with Stewart Perry Construction to perform a detailed site study to determine the best way to redevelop the centerpiece of Ensley’s Commercial Business District. A complete renovation of the building was not feasible due to several major structural challenges resulting from being vacant for nearly 35 years.

The Ramsay-McCormack building, a 144-foot-tall office tower completed in 1929 and located on the corner of Avenue E and 19th Street Ensley is named after investment partners Erskine Ramsay and Carr McCormack of the Ramsay-McCormack Development Co.

The building housed the Bank of Ensley on the ground floor, as well as the developer’s offices and local offices for U.S. Steel for several years. Despite a renovation in 1970, the closure of U.S. Steel’s Ensley Works left much of the tower vacant and the building’s doors were closed in 1979.

The city has owned the building since 1983 when U.S. Steel sold the building to the city for $1 and was listed on the National Register of Historic Places in 1984, but has been empty since 1986.

At the corner of Avenue E and 19th Street, the Ramsay McCormack Building anchors the commercial district in Ensley. The 10-story building completed in 1929 is a contributing structure to the Downtown Ensley historic district and is on the National Register of Historic Places.

Some of the structural challenges resulting from being vacant for nearly 35 years: