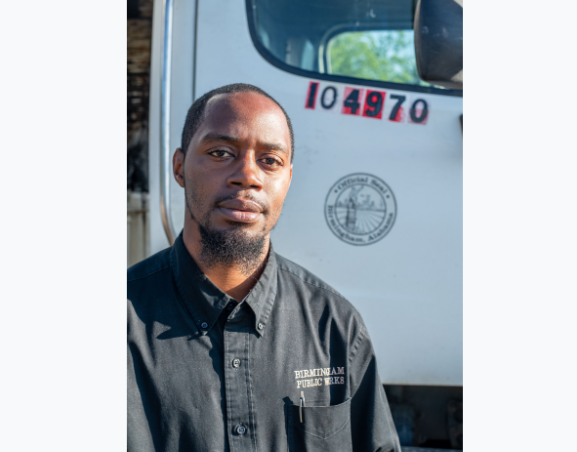 Whenever children in his neighborhood didn’t have a place to stay, there was always a spot in Jaccari Hampton’s house.

“There were a couple of times in my life when I know we had two or three kids stay with us when they didn’t have anywhere else to go off the street,” he said. “My mama raised them, so they’re like my brothers and sisters to this day. … She just did things like that.”

On holidays, like Halloween, his mom would look out for others.

“I watched my mom make candy bags for the kids, and we would set them up in front of our house so they wouldn’t have to go door to door. She would make like 100 bags and have my brothers and me out there passing out bags to the other kids,” said Hampton, who was 6 years old at the time.

The heart for serving people is a trait the now-31-year-old Hampton shares with his mother, Terri, and grandmother, Amelia — a trait he displays every day as a supervisor for Birmingham’s Ensley District Refuse crew.

For the past two weeks, Hampton has been providing lunches from Full Moon BBQ to Birmingham Department of Public Works employees who work in various city departments.

“I noticed that their morale was getting low [because of widespread news about the virus], and I told them, ‘You have to think positive. You still have a job, and you’re still getting 80 hours every two weeks, so you have to thank the Lord for that,’” said Hampton, who has been with the city’s Department of Public Works for six years. “I can’t give all of them money, but I can feed them some lunch to lift everybody’s morale and just take it one day at a time, one job at a time.”

Hampton grew up in West Birmingham with his two older brothers and one younger brother. They were raised by their mother and grandmother. Hampton’s mother worked as a beautician, and his grandmother worked at Compass Bank, retiring after 40 years. He attended Washington and Wilson elementary schools, Glenn Middle School, and P.D. Jackson-Olin High School.

One thing Hampton vividly remembers from his childhood was seeing that his mother and grandmother each had a “heart of gold.”

“I remember times when my mother would give somebody a loaf of bread or something, and I would be like, ‘But, Ma, we need a loaf of bread.’ She would tell me, ‘They need it more.’ [My mother and grandmother] would help people in our neighborhood with their bills, buy them groceries, whatever they needed,” he recalled. “They just had a heart of gold.”

Hampton played basketball, football, baseball and soccer from the time he was 4 years old.

“I was really good at basketball, and I was going to play in high school, but my mom needed help with the bills. So, when I was 15, I decided to get my first job at a [fast food restaurant] to help her out instead,” he said, adding that he worked as a cook for about two years before taking a job at Full Moon BBQ on Valley Avenue.

After graduating from high school in 2007, he went to John Hand’s Commercial Driver’s License (CDL) Skills and Training in Hoover and worked several different jobs before joining the city’s Department of Public Works in 2014.

Hampton started by putting waste on the back of the trucks before being promoted to supervisor for the Ensley District about eight months ago. Through it all, he never lost his commitment to helping people.

“I’ve done a Christmas drive for six years,” he said. “I find 10 families that are less fortunate. They write their lists, and I get everything on the lists. For Thanksgiving, I give out 50 turkeys and 50 hams to families who need them. For the Fourth of July, I have a big of event and take families to the fireworks show on Red Mountain with free food, drinks, a clown for the kids, and a moonwalk. For Easter, I do the same thing with an Easter egg hunt for the kids. On Halloween, I give out free candy; we advertise it on Facebook. … [These are things] I’ve always done, even before I was working for Public Works.”

In the midst of the COVID-19 pandemic, Hampton continues to serve others, paying out of his own pocket.

He reached out to Michelle Taylor, chief administrator for the Department of Public Works, and told her about his idea to provide lunches.

“She was cool with it, and she let me know the names of the other district supervisors and how many people were in each department,” Hampton said. “Then I contacted the people at Full Moon, and they were happy to help.”

Earlier this month, Hampton provided lunches for the West District crew, which consists of about 60 workers, on Mondays; the Southside District, about 100, on Tuesdays; the North and East Districts, about 60 each, on Thursdays and Fridays. The following week, he fed 104 city construction employees and 300 employees from horticulture, animal control, and landfill departments.

“They were excited and very appreciative,” he said. “I just wanted to do something nice for them, to let them know that somebody out there cares about them and what they’re doing doesn’t go unnoticed. They’re on the front lines, too, and they deserve some love.”