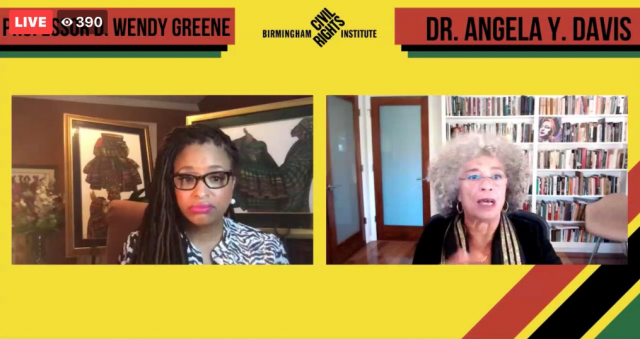 During the virtual ceremony held on Juneteenth, Davis was presented the award which honors outstanding individuals for significant contributions to human and civil rights.

Early last year, the BCRI created an international outcry by presenting the award to Davis, rescinding it and then re-inviting her, but the embarrassment lingered and led to the resignations of three BCRI board members, including the chairman.

With the fiasco behind, Davis said Friday she was elated to receive the award.

“Let me express my deepest gratitude to the Birmingham Civil Rights Institute for offering me the Fred L. Shuttlesworth Human Rights Award,” Davis said during a conversation with Professor D. Wendy Greene, of Drexel University, who hosted the ceremony.

“I was of course, very excited to accept this a year ago when I was first told I was chosen as a recipient,” Davis said, “… given the awesome work that has taken place since last year, the reorganization of the board, conversations with the community the pivotal role [Birmingham] Mayor [Randall] Woodfin has played . . . I will always treasure this award . . . everyone deserves to have their human rights recognized and defended.”

During the hour-long dialogue with Greene, Davis touched on today’s social climate and said people of color are in the midst of an extraordinary movement “in the aftermath in the egregious murders of George Floyd [in Minnesota], Breonna Taylor [Kentucky], and Ahmaud Arbery and Rayshard Brooks [both in Georgia].”

“In order to bring about change in our society, and that is changing systems, institutions, structures it’s about recognizing there is a connection between anti-black and anti-immigrant racism, Islamaphobia… we are sometimes so myopic that we fail to realize that we can imagine a very different world,” she said.

Davis said it was an “oxymoron” that uniformed men and women are the source of safety and security, but we have to think much broader to build better communities. “It is education, housing, health care… we can’t imagine new institutions that will address the needs of those who often go unaddressed by people who are the targets of racist police violence,” she said.

During the talk she also recalled growing up in Birmingham on Dynamite Hill — the Smithfield neighborhood that was regularly bombed in the 1950s and early 1960s to intimidate black families from moving into the community.

“The mostly beautiful memories that I have of growing up in Birmingham are living in a neighborhood that eventually became known as ‘Dynamite Hill’. I formed lifelong friendships, as children we played in the streets,” she said. “I went to Sunday School at First Congregational Church on Center Street and I will never forget the sense of connectedness and justice that emerged from that experience . . . I’m eternally grateful to Odessa Woolfolk, my most memorable Sunday School teacher and lifetime friend.”

Mayor Woodfin said he was honored to “celebrate the life, legacy, and advocacy of one of the strongest voices of equality in our nation’s history . . . [and] a woman who just happens to be a daughter of Birmingham.

“She once said these very profound words: ‘I am no longer accepting the things I cannot change, I am changing the things I cannot accept.’ Look at the wave of social change that has swept our country in the past few weeks, those words were prophetic… simply put, we’re the change we want to see. That thirst for freedom has made Dr. Davis an icon.”