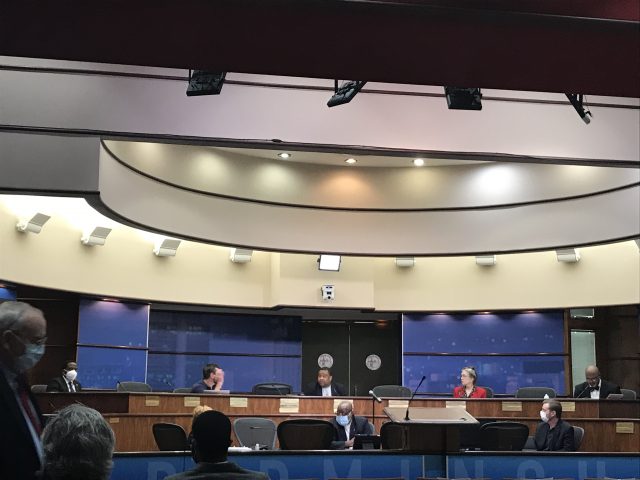 Birmingham is facing an epidemic and pandemic simultaneously, city leaders said Tuesday. The pandemic is COVID-19 while the epidemic is gun violence, they said.

“Although we know there are many things going on in our community and country such as the global pandemic, the economic crisis hitting our city and warranted civil unrest due to the death of George Floyd, this weekend was still tough,” said Mayor Randall Woodfin, after a man was killed walking to a convenience store and a woman killed riding in her car on the way to the store.

The man Larry Pettway, 70, was shot to death in southwest Birmingham Friday. He was caught in the crossfire. The woman Brenda Lee Jordan, 62, died from a gunshot wound while sitting in the passenger seat of a vehicle in the East Lake area. No arrests have been made.

A visibly angry Woodfin called the shooter or shooters cowards.

“If you are reckless and cowardly enough to shoot at people, you should be manly enough to turn yourself in,” he said. “There are a lot of street codes out there and I believe one of those codes needs to be no one should be dying from gun violence in our community but I think the same outrage and anger when an innocent child is killed in Birmingham, I think you should have the same outrage and anger and hurt for our senior citizens as well,” he said.

Despite the deadly shootings, the number of homicides this year (43) are nearly even with where the city was last year at this time (45), said the city.Woodfin encouraged anyone with any information to contact Birmingham Police Department’s homicide unit at 205-254-1764 or Crimestoppers at 205-254-777.

“This man and women were going about their daily routine and they were not involved in any transactional or domestic dispute,” he said. “Ms. Jordan was simply driving through her [East Lake] neighborhood… and I think there has been a new cry out and request for additional police patrols in that area.”

Councilor Crystal Smitherman, who represents District 6 were Pettway said the conscious disregard for life is wrong.

“I’m going to continue to pray for the safety of my district, but I’m going to look for alternative ways to combat crime. This has to stop.”

Councilor Wardine Alexander, of District 7, talked of her own personal experience with gun violence including a family member who was a shooting victim in February.

“I’m asking each of you to become a part of the solution, we’ve used the terms lawlessness, senseless and how senseless is it for you to come home from being with friends and to be attacked and shot and left to die?”

In other matters, the Council voted to extend the current face covering ordinance to midnight July 3. The council voted 7-1 with Williams the dissenting vote. Councilor Darrell O’Quinn was not present for the vote.

Williams, who has called imposing the ordinance government overreach in the past, said he believes it is time to let the ordinance expire.

“… we can try to strike fear all we want but the truth is if someone doesn’t want to wear a mask, they won’t but imposing fines or subject to being stopped by the police, is not going to help.”