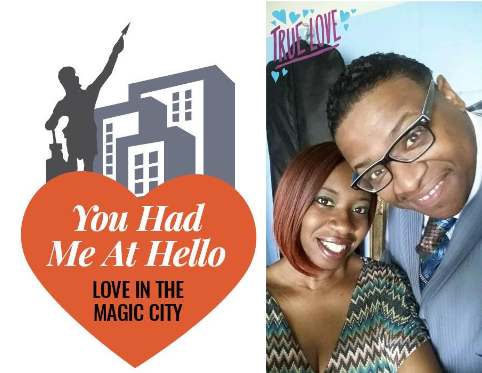 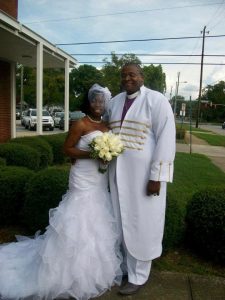 Met: Summer 2008 at Mt. Calvary Missionary Baptist Church in West End where the two sang in the choir.

“He was a minister and drove the church van, and we would all go out to eat with different church members,” La’Keesha said. “We’ve always been there for each other through hard times and difficult relationships…but I never thought about him like that. I thought I was never the type of woman that he would want to date…. and I had a son.”

Although La’Keesha said that she never thought about Lovie romantically, Lovie knew something was going on “she started bringing me breakfast every Sunday morning,” he laughed. “She started hanging out with me more, she was a cool person and down to earth. I wanted somebody that could understand soul and spirit…”

In 2011, Lovie was given a prophecy from a fellow minister that God wanted Lovie and La’ Keesha to become one.

“I was dropping Pastor Sherry Swope [one of the ministers at Mt. Calvary] off at home, and she said, ‘I believe Keesha is your wife. The Lord told me to tell you that she was going to be your wife. “I got home and got on my laptop and Facebook messaged La’Keesha about the prophecy I just got… She was coming out of a bad relationship… I told her the ball was in her court.”

First date: Spring 2011 at Ryan’s in Gardendale. Lovie and La’Keesha, along with another couple from the church went out to eat. They went as a group, but got separate tables.

“I didn’t have any jitters, and I wasn’t nervous because I was comfortable around him. Only difference was now we were a couple,” LaKeesha said. “We enjoyed ourselves, [La’Keesha’s son Adarrell was 4 at the time], and he was with us, and so was minister Sherry, the one who prophesied to us…”

Lovie said he was already in love with her, “I was looking in her eyes, I knew she was going to be my wife.”

The turn: On April 27, 2011 when tornadoes swept through Alabama causing major devastation in Pratt City, where Lovie lived. La’Keesha was unable to contact Lovie, which heightened her sense of love and concern for him.

“I realized I was falling in love with this man, he accepted my child, and I saw that he’s going to add to me and not take away from me, and I needed him in my life,” La’Keesha said.

For Lovie, the tornado events revealed how deep La’Keesha’s love had become. “I’d never had anyone who cared so much for me, that she was calling around to different people’s houses trying to find me and see if I was ok… The power was out everywhere, to know that she sat in her car to charge her phone to keep calling around trying to find me [was eye opening],” Lovie said.

The proposal: June 1, 2011, in the Gardendale Walmart Parking lot one night after Bible study. Lovie was on van duty, and after dropping off everyone except Pastor Swope, who was in on the plan, Lovie proposed.

“I made up the crazy excuse that my grandmother wanted some peaches… so we had to pull over at Walmart so I could go in and get them. The plan was to go in and buy a ring and come back out and propose but the jewelry counter was closed, so I came back out and did it anyway,” Lovie said. “I opened up Keesha’s door and I was pretending that the tire on her side was low and I needed her to get out and look at it… When she was looking, I got down on both knees and I said ‘‘baby, we’ve only been together a few months, but I believe God brought us together by divine intervention, and I know that we’ve both been through a lot, and I’m not gonna guarantee that I’m going to be the perfect husband, but I guarantee you that I will love you eternally and no matter what we go through, our love and bond will stand. Will you marry me?’ And she started jumping all over me screaming yes, yes, yes.”

“I was surprised, and I was excited… “I was so excited for the next day, I couldn’t wait to go back to [Walmart] and get my ring,” La’Keesha laughed.

Most memorable for the bride was being escorted down the aisle by her father and young son, and the surprisingly large attendance at their wedding. “We had invited a lot of people to the wedding, but we didn’t get a lot of [RSVP’s], so when the doors opened and I walked down the aisle and saw all the people who love and support us there was so heartwarming…,” La’Keesha said.

Most memorable for the groom was presenting a gift he had for his bride at their wedding reception. “I surprised her with a 12 carat yellow diamond ring at the reception . . . and I was happy to be able to give her that ring and seal the union,” Lovie said.

They honeymooned in Pensacola Florida. “We got sunburned together at the beach, it was terrible. We had to rub ointment on each other and learned hot water showers was not good for sunburn,” La’Keesha laughed.

Words of wisdom: “Always be open and honest with your partner no matter how hard it is, or how you think it may hurt them,” Lovie said. “Honesty is most important and if you love a person you’ll give them that. You have to be committed to being married, but you also have to be committed to doing the work to stay married, because marriage is not easy, it’s a lot of work. You have to make sure you understand each other in every area of your marriage.”

La’Keesha said, “Communication, verbal and non-verbal, is [key] because you might not want to say certain things, but your body language will say it all. Learn your partner’s communication style, learn how they communicate with you. In order to know somebody and for your relationship to work, you have to be willing to not only talk to each other but also listen to each other….”

La’Keesha, 34, is a Chicago native who moved to Birmingham in 1997. She attended West End High School, and works as a Customer Service Supervisor for AT&T.

Lovie, 36, is from Jamaica Queens, NY and moved to Birmingham in 1996. He attended Ensley High School, and C.L Pointer Seminary School in Birmingham. Lovie works as a Retail Customer Service Rep at a Birmingham retail establishment.

During the COVID-19 pandemic, both La’Keesha and Lovie have continued to work at their respective offices. 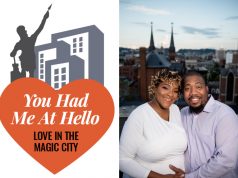 ‘We kissed. I felt something tingle in my heart and thought ‘yeah…love’’