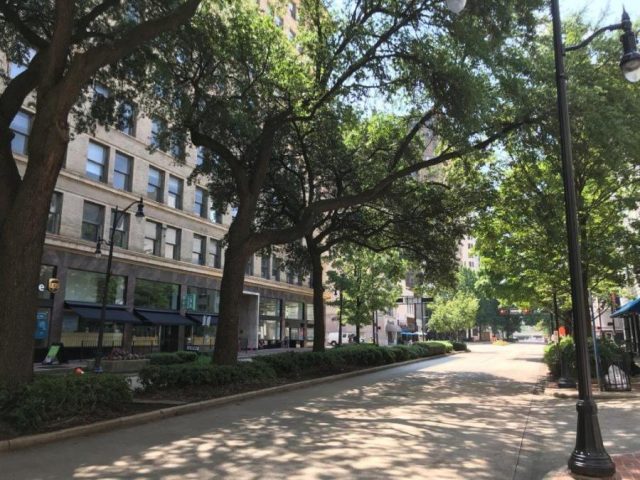 Downtowns across the U.S. have felt the economic sting of COVID-19, with many commuters working from home, hotels barely occupied, restaurants and entertainment venues constrained or closed because of health and safety guidelines, and street festivals and other popular events severely limited or canceled altogether.

Downtown Birmingham is among the city centers that have suffered from the pandemic’s gut-punch. But city officials and downtown boosters – while actively working to sustain the downtown economy during these tough days – are looking ahead to better times, and ways the central city’s recent renaissance can stay on track.

One idea now under discussion is updating the design, look and functionality of some of downtown’s iconic avenues, as well as a key public space: Linn Park.

“It’s been a long time since these places have had a refresh,” said David Fleming, CEO of REV Birmingham, a nonprofit organization that focuses on the vibrancy of downtown and other nearby neighborhoods. Fleming spoke about the potential during a recent virtual discussion with REV supporters.

Considered Birmingham’s main street, 20th Street underwent a dramatic redesign in the mid-1970s, which turned the then-broad and sterile roadway into a more inviting boulevard with wider sidewalks, plantings, benches, custom lighting and signage. The “Birmingham Green,” as it became known, was intended to make the street more pedestrian- and business-friendly. Over the decades, the north side of 20th street has grown into a leafy oasis in the heart of the city. And over the last 10 years, new restaurants, historic restorations and conversions of commercial structures into downtown residences have reinvigorated the strip.

Still, Fleming acknowledges, the physical design of 20th street, which runs north-south all the way through downtown, “really hasn’t changed a whole lot since the 1970s.”

Meanwhile, on the northern end of 20th street, is historic Linn Park, which has received national media attention recently over the removal of the park’s longstanding confederate monument. The city’s “original park,” Fleming said, hasn’t seen a design upgrade since the 1980s.

From Linn Park, it is a short walk along an outdated pedestrian plaza, past the Birmingham Museum of Art, to the site of CityWalk BHAM. Covering 10 city blocks, the soon-to-open linear park, being built underneath the newly rebuilt, elevated stretch of Interstate 59/20 that runs along the northern edge of downtown, is expected to offer a range of activities, from walking trails, to a dog park and skate park, to areas for cultural events and food festivals. The park will tie in to the Uptown entertainment district and the renovated Birmingham-Jefferson Convention Complex, including the new Protective Stadium that will serve as the home for UAB football.

Fleming said REV has been talking with city planners and with a group of local architects and landscape experts to explore budget-conscious options to refresh both 20th Street and Linn Park, and better connect Linn Park to the CityWalk as a gateway into downtown.

“We will be working with the city on what we can do” on 20th street, as well as along the Second Avenue and Third Avenue North retail corridors that cross 20th Street. “We are looking at past designs and will be doing business outreach” as well as exploring how multimodal transportation options, such as bikeshare, scooters and mass transit fit together to create an even more vibrant area.