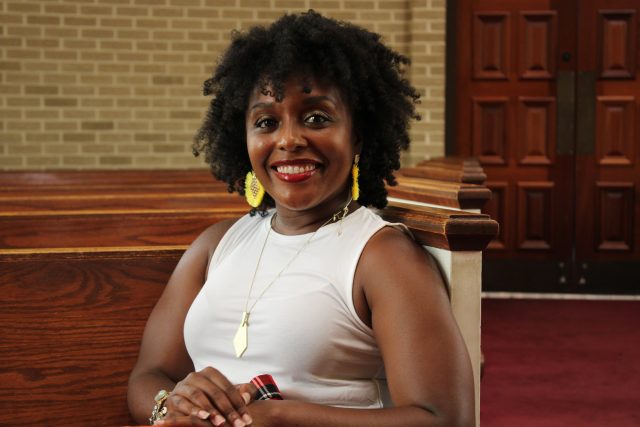 At age 14, Leticia Watkins designed an arts programs to help children in her neighborhood find a creative outlet—and she hasn’t stopped since.

Watkins, now 35, currently serves as director of children and youth at Sixth Avenue Baptist Church. She also is the creator and founder of nearly a half dozen organizations for young people, including Leaders for Life, a weekly meeting during which fourth- and fifth-grade girls to learn self-empowerment, and SOLUTIONS, a program that teaches conflict resolution to elementary school students.

For Watkins, who holds a master’s degree in biomedical science, anywhere she works is almost like her “lab … because I’m constantly thinking, tweaking, and creating.”

For example, one of her programs, Collision, launched in 2018 with an aim to better understand the needs of kids in the Titusville area.

“Life can come at our youth hard, so I wanted them to have a foundation of faith as they face difficulties and uncertainties in life, I wanted them to have hope [in the face of] hopelessness,” Watkins said. “I thought to myself, ‘What if I empowered [young people] to create what it is they think they need?’ Adults sometimes … make decisions about what we think young people want to do without bringing them to the table.”

Collision has about 12 youth board members and, while Watkins serves in an advisory role, all decisions are made by the board. In the group, young people are taught how to participate in a voting process, brainstorm ideas for events, and engage in leadership positions by creating a space where they decide what to do in the community.

In March, when the coronavirus pandemic shut down schools and businesses and canceled a spring break domestic mission trip the group had planned, Collision embarked on a program to feed kids who would normally depend on school for breakfast and lunch; it served children in several neighborhoods, including Titusville, Mason City, Arlington West End, and Powderly.

“At the very most, we were thinking we could do two weeks with around $2,600 to spare. We started the program on March 19 thinking we would serve about 200 lunches a day,” Watkins said, adding that the Collision program partnered with Kikstart Inc., a larger feeding program in the Birmingham area, and obtained funding from other sources, such as the Community Foundation of Greater Birmingham and United Way of Central Alabama, to deliver more than 450 lunches a day. So far, the group has served nearly 34,000 meals over 100 days.

Collision also established a weekend pack program that provided cereal, juice, fruit, and other foods to community children, an effort has supplied a total of 7,950 weekend bags.

The Making of a Mentor

Watkins was born in Poughkeepsie, New York, and grew up in the rural town of Surry, Virginia, where her grandparents lived. As a teenager, she started doing faith-based dances and would write holiday plays for her church. Dance rehearsals were held in her backyard.

Watkins said her mother, Cathelene Watkins-Johns, is one of her biggest role models.

“Serving is a natural display of love for me because it was modeled by my mother,” she said. “During my childhood, she worked with adults dealing with intellectual and developmental disabilities, and she continues to do so today. Even now, 600 miles away, she reminds me to spread love and be the light here in Birmingham”—and Watkins spreads that light wherever she goes.

While attending Virginia Commonwealth University in Richmond, Virginia, where she earned a bachelor’s degree in biology, she directed youth programs to help disadvantaged young men in Richmond City Schools improve their reading scores and social development.

In 2009, she moved to Birmingham, where she attended the University of Alabama at Birmingham (UAB) and earned a master’s degree in biomedical science with a focus on immunology. Watkins’s graduate studies gave her a unique perspective about COVID-19.

Getting rid of the coronavirus must be a concerted effort, she said: “The people have to be part of it. It’s not an overnight process. We have this ‘popcorn’ type of society, where we expect things quicker, but it will take multiple years to come up with a vaccine.”

During her time at UAB, Watkins continued spreading her light by creating the Blueprint CONNECT program, which helped undergraduate students partner with young professionals in their fields. Watkins won the 2013 Black Graduate Student Outstanding Alumni Award for the program. Her community work at UAB led to an offer to work with Sixth Avenue Baptist Church in 2014.

“For the past six-and-a-half years, I’ve had the opportunity to serve the children and youth here at Sixth Avenue Baptist Church,” Watkins said.

Part of that service includes working with Deon Arnold, a young man “[who] lost his mother, maybe two years ago,” Watkins said.

“[Arnold and his mother] would talk about violence in the community and what they could do to produce change in the community. When she passed, it ignited something in him. Like overnight, he just grew up.”

Arnold took his platform to the Birmingham City Council, where he asked questions about a peace campaign in which children could take part. Watkins helped Arnold, create SOLUTIONS, a program that teaches conflict resolution to elementary school students.

“The adults [in City Hall] were really amazed by [Arnold’s] confidence,” Watkins said. “He sat down with me and asked if I could be an advisor. Without hesitation, I was like, ‘Absolutely!’”

Arnold also appointed his grandmother as the secretary for SOLUTIONS.

Elementary students were chosen over teens as the demographic for the program to help younger children learn how to self-mediate before problems arise—“[to] see what could happen if we taught younger kids how to resolve conflicts before they decide to use weapons against their family members or people in their community,” Watkins said.

“Even if a fourth-grader, a fifth-grader is obviously not a 17-year-old, they’re not far removed from being 17,” she added.

Given all the work Watkins has done with young people, it was natural that she would create a program aimed toward young girls, too—though that wasn’t a goal. The idea first came to Watkins when she was visiting an elementary school to help mediate a problem between two young girls.

“We really did not intend to create a program,” she said.

When Watkins sat down with the girls, they felt just like family, she recalled: “We smoothed out all the cattiness and issues they were having in a one-hour session.”

From there, Watkins asked the girls if they were open to a program they could come to each week. They were, and it led to the creation of a program that expanded into providing lessons about emotional management and self-love called Leaders for Life, a weekly gathering to help fourth- and fifth-grade girls to learn self-empowerment. Each inaugural class creates its own anthem designed to empower and encourage girls to think of themselves as leaders and achievers. Every girl comes up with a line that includes her name and a positive affirmation about herself.

Leaders for Life also emphasizes Black excellence and pride in being from Birmingham, often inviting Black leaders who were born in or live in Birmingham to encourage the girls to follow their dreams.

Currently single, Watkins said she plans to marry and have children of her own in the future. For now, the children in her youth programs are much like her own, and she wants to leave a legacy of service to those young people and her siblings’ children, as well.

“[They are] “like my babies to me,” Watkins said, noting that several of her nephews serve in local Birmingham youth programs and travel to domestic missions alongside her; her godson also recently helped her work in a teen camp program.