Jefferson County has been hit with a “deluge” of in-person absentee voters that has caused complaints and lines stretching from the courthouse outside to nearby Linn Park. On Thursday officials announced plans to deal with the problem.

“We did not anticipate this groundswell . . . We did not see COVID-19, we did not foresee that people would start coming here rather than going to the 170 polling places” throughout Jefferson County, said Circuit Clerk Jacqueline Anderson-Smith.

In addition to the increased number of in-person absentee voters there is also a backlog of mailed-in absentee ballots that has raised concern ahead of the Nov. 3 general election.

Absentee ballot applications are obtained from and returned to absentee election managers in the circuit court clerk’s office. The absentee ballots are either mailed to voters or handed to them if they apply in person.

At least 300 walked-ins were at the downtown Jefferson County courthouse on Thursday and the number has averaged between 300-400 per day for the week with many standing in lines to cast their ballots, and that number is expected to swell, Anderson-Smith told the Birmingham Times on Thursday.

However, steps are being taken to address the matter. Anderson-Smith said she now has 34 people in her office, up from eight, and has been authorized to hire another 25. “I have the ability to hire more people . . . we were caught off guard. I was looking for a [rainstorm] but I got a deluge,” she said.

Anderson-Smith said she will have 14 phones lines for anyone calling in rather than coming in-person, she said.

Also, with the help of state Rep. Rolanda Harris and Jefferson County Commissioner Sheila Tyson, the downtown and Bessemer courthouses will be open on two Saturdays this month — Oct. 17 and 24 from 9 a.m. to 1 p.m. – to help with in-person absentee voters, the clerk said.

County Manager Tony Petelos told the County Commission on Thursday that IT and general services departments are working with the probate judge and clerk’s office to put in more computers and bring in more personnel. “I spoke with the secretary of state (John Merrill) yesterday,” Petelos told the commission during a remote phone call. “He’s going to help us out. We have plans to bring in more people to help to catch up on absentee ballots.”

Anderson-Smith acknowledge work needs to be done to catch up and her staff is not that far behind but this week has been one “wrought with unforeseen obstacles” including a fire alarm on Wednesday that went off on eighth floor of courthouse that caused the building to be evacuated.

To reduce the workload, she now has teams in place working Saturdays and Sundays to streamline the process to make it more orderly, she said.

“Generally we send out 600-700 [applications] and we’re trying to get 1,000 going out each day in order for us to maintain a balance right now,” she said. “. . . We have received and completed ballots that are in the locked ballot boxes waiting to be counted on Election Day and that number is over 14,000 completed. We have 3,000 that need to be mailed out we are working on today.”

To reduce the lines for in-person absentee voting Anderson-Smith said a courtroom on the sixth floor that can accommodate up to 25 at a time has been set aside for the elderly. Anyone in a wheelchair or using a cane is pulled from the line and directed to the sixth floor where they can fill out paperwork, she said.

Others are directed to a second floor jury room which accommodates 400 people, where they can fill out the application paperwork . . .which will be sent up to the 5th floor absentee ballot office to be processed.

Social distancing is practice in all of the areas because all of the seats in the courtroom and jury are six feet apart, she said.

Citizens are encouraged to call the clerk’s office at 205-325-5313 to have applications mailed. 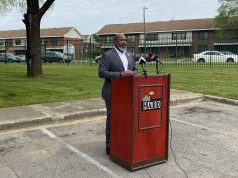 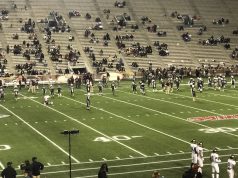 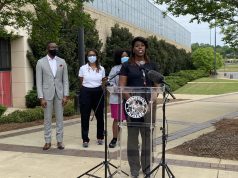