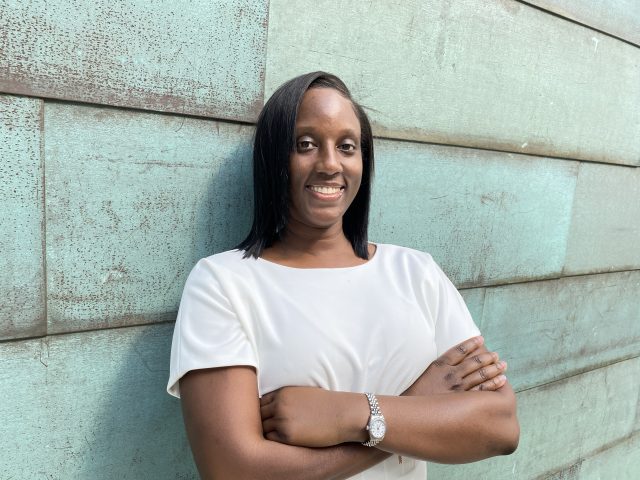 Being the first African-American to lead the Alabama State Nursing Association (ASNA) in the organization’s 107-year history is an honor, but hopefully it will become the norm for other leadership roles within the industry, said ASNA President Lindsey Harris.

“The [ASNA] definitely looks at diversity and inclusivity, and we will continue to look at that throughout,” said Harris, 37, who has a doctorate in nursing practice (DNP) and is a board-certified Family Nurse Practitioner (FNP-BC).

“I want this to become the norm. It definitely is an accomplishment for me, but it is something that is so timely that it has happened right now,” she said, noting the protests against racial injustice across the nation.

“It is an honor, and I want other leadership positions in other organizations to know this is something that is normal and that we look at everybody the same.”

The ASNA serves as the professional voice of all registered nurses in the state and promotes excellence in nursing—a lifelong pursuit for Harris.

“I feel like God put me on this earth is to help others, and nursing was the best career I could choose to fulfill [that] passion … and give back to the community,” said Harris, who is a nurse at the University of Alabama at Birmingham (UAB) and immediate past president of the Birmingham Black Nurses Association (BBNA).

As president of the ASNA, Harris represents more than 100,000 nurses in Alabama.

“I’m here to help promote excellence in nursing and maintain the professional voice for all nurses in the state,” she said. “We are going to help with policy in the state, things that matter to nursing and things that can improve the outcome of Alabama’s patients and citizens. We try to mentor and groom nurses within the state. We also want to bring together the nursing field and health care, so we can have one collective voice.”

“Nurses need to be heard. We are the most trusted profession over the last 18 years, according to a Gallup poll,” she said. “Nurses need to be on boards, do bookbag drives for back-to-school, find charities to give to during Christmas for [needy] kids. … [Also], especially now when it comes to the flu shot and a COVID-19 vaccine, … we want to educate the community about health and things that will affect them regarding their health.”

Nurses do more than take weight, temperature, and medical information from patients: “Nursing speaks to patients in every aspect of their life,” Harris said.

“We have to take into consideration the patient’s spiritual, physical, and mental health when caring for them,” she added. “Health care and nursing truly touch every part of life. The healthier a community is, the more vibrant it is as far as people being able to go to work and do things to improve their community.”

Harris is from Flintstone, Georgia, a city located 12 miles south of Chattanooga, Tennessee. She lived with her parents, Carla and David, and her younger brother, Jordan. Her mom had a position in supply chain management, and her dad was an information technology specialist.

The Harris family encouraged participation in extracurricular activities. Harris started playing basketball at age 4 and played throughout elementary, middle, and high school, after which she earned a scholarship to play basketball at Samford University.

Her close-knit family included aunts, uncles, and grandparents, all of whom lived within the same area, “on the same road within two to five minutes of each other,” she said.

“On Sundays, we had family get-togethers. We knew everything about everybody within the family. … We’re Christians, so every time our church, [New United Missionary Baptist Church in Chattanooga], was open we went,” said Harris, who now attends New Life Interfaith Ministries in Birmingham.

Because of her hometown’s proximity to Chattanooga, Harris spent most of her time in that city. She attended the Chattanooga School for the Arts and Sciences, Chattanooga Christian School, and Baylor High School. After graduating in 2001, she moved to Birmingham to play basketball at Samford.

“Being a student-athlete is very tough,” she said, adding that being a nursing major was a different kind of challenge.

“For nursing, you had to think critically. I have a really great memory and can memorize anything, but for nursing you couldn’t just memorize,” so Harris sought help from her teachers.

“Anytime we had class, I would be there asking them questions,” she said. “I can remember many times when I would do my homework while watching men’s basketball games or studying nursing flashcards while traveling to games.”

After graduating from Samford in 2006, Harris got a nursing job at UAB before entering the Master of Nursing program at the school, which allowed nurses to spend a month working in various departments.

“I went anywhere from the Emergency Room [ER)] to the Intensive Care Unit (ICU)] to the general medical surgery floor,” she said. “[Eventually], the unit I chose was the women’s and infant center in the gynecology and oncology unit. I fell in love with the people there on the unit, which made it so much easier for me to work there.”

Harris received her Master of Nursing degree in 2011 and her DNP in 2016. She then started working on the inpatient glycemic management team, where she and other nurses manage patients’ diabetes.

Harris’s road to leadership with the ASNA began during her undergraduate days at Samford.

“One of my professors invited me to a meeting with the Birmingham Black Nurses Association,” she said of the organization, founded in October 1989, that focuses on health care disparities in the state and sponsors nurse workshops, community health fairs, and community service projects.

“When I got there, I became a student representative, then secretary, and then I went on to hold several offices within the organization,” Harris recalled. “I was mentored and groomed by the [BBNA] to be who I am— along with my family values and upbringing, of course.”

“I want other young people to be inspired and to see that they can do this and break barriers,” she said.