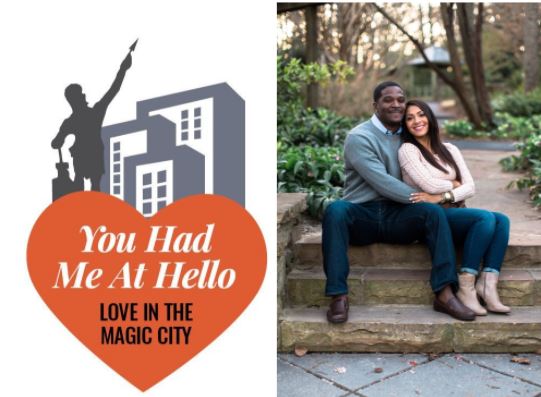 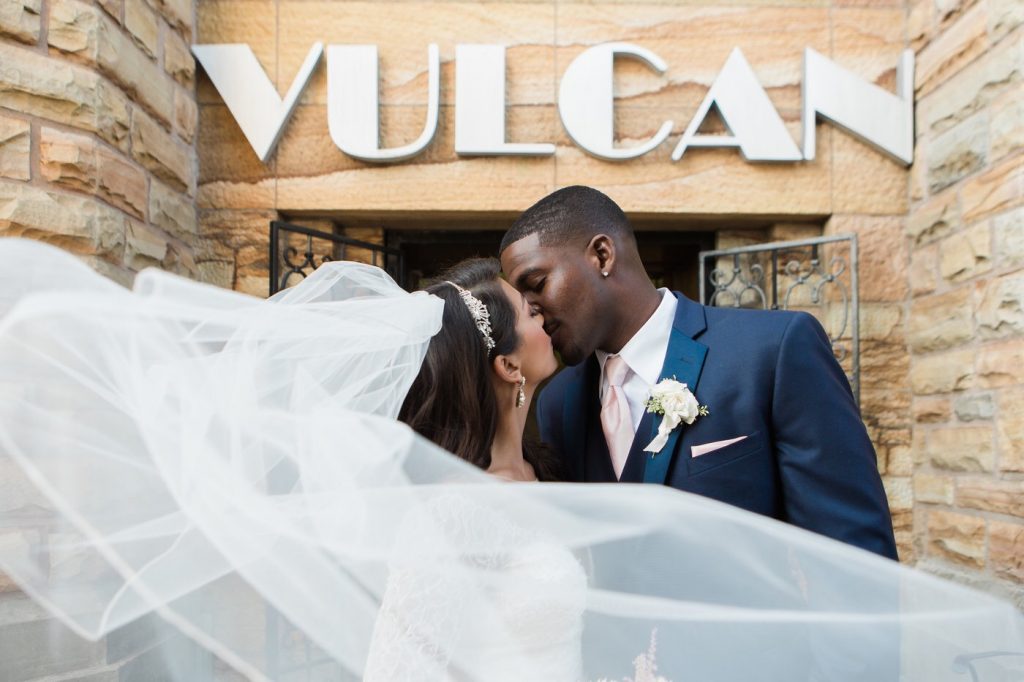 Met: Fall 2007, at University of Alabama at Birmingham [UAB]. Amanda, a member of the Delta Sigma Theta sorority, and Antjuan, a member of the Omega Psi Phi fraternity, would see one another during Greek social events. However, it wasn’t until June 2013, at a downtown Birmingham bar that the two would begin to really talk.

“It was my birthday weekend and I was in town [from Memphis, Tenn.],” Antjuan said. “And normally I don’t do pick-up lines, but I knew her from sorority and fraternity things in college and my frat brother gassed me up to go talk to her, and I approached her and told her she was the prettiest girl in the bar… I didn’t think much of [the encounter] until I saw a message from her on Facebook [later that night].”

Amanda recalled spotting Antjuan as soon as he entered the bar.

“He walked in and I thought, ‘wow, I  hadn’t seen him since college, he’s looking good, I wonder what he’s up to?’ and then he  starts walking straight towards me,” Amanda laughed. “We chatted for a little bit and that night I did something I normally would never do. I sent him a message on Facebook [saying] ‘it was really good bumping into you tonight’, and he immediately messaged me back saying he was in town for his birthday and that I should come over to his mom’s house for his birthday the next day.” Amanda declined and said, “how about we just catch up another time?”

Antjuan and Amanda kept in touch over the next month, “and I came home again for the 4th of July and we went out on our first date then,” he said.

First date: July 6, 2013, at a [now closed] restaurant in Homewood called Dodiyos. Afterwards, they went for drinks at the Highland’s Bar on the Southside.

Amanda said the date almost didn’t happen because she already had a trip to the beach planned with her family, “but I had to figure out a way to make it work,” she said. “I just drove back early…”

She recalled being impressed by his restaurant choice. “When he said he wanted to go to Dodiyos I was like ‘oh, this date just got fancy’, I had only been there a few times for work related events…”

The anticipation was high that night, she said. “It had been a month since I saw him and I had butterflies on the ride to the restaurant with him, and I remember being excited about the date, but I didn’t think it would go anywhere… He was the president of his fraternity [chapter] while we were in school, so I had this impression, not that he was a ladies man or a player, but that it was going to turn into anything serious.”

Antjuan said the date went well, and that he ordered a popular dish to impress her. “The restaurant had a Mediterranean dish [that was] grape leaves, and I ordered it trying to impress her, but they were disgusting,” he laughed. “I also remember she wore these white jeans, and something about the way she looked in them did it for me… After dinner, we went to Highland’s Bar on the Southside and had a drink, and then I took her back home.”

Amanda remembered eating the grape leaves, “thinking that he was one of those fancy uppity people, so I pretend to like them too,” she laughed.

The turn: October 2013, Antjuan moved back home to Birmingham. “After meeting Amanda, I got a little homesick, my family was in Birmingham and I started realizing there was nothing in Memphis for me and that everything I needed was in Birmingham,” he said.

“We talked on the phone every day after that first date, and before we ever saw each other again we decided that we wanted to be in a relationship,” Amanda said. “I stayed on the road going to Memphis, or he was coming here. But that first trip to Memphis is what really did it for me, it was like a dream come true… My first morning there he made me this amazing breakfast spread, and he cooked and grilled for me while I was there. He took me out on a lake, and we fed ducks. It was just like a fairy tale. Everything you would dream of a guy to be– sweet, nice, romantic, thoughtful, a good cook– Antjuan was.”

The proposal: May 1, 2015, Antjuan put together a scavenger hunt that led to where they had their first kiss at the Hot And Hot Fish Club in the Highlands on the Southside.

“I had been in Nashville all week doing training [for his job at the time], and was supposed to be coming home that day,” Antjuan said. “I made some phone calls [to the establishments and parents to set things up] and everything turned out perfectly,” he said. “I had her come to the front door of their shared apartment, she thought she was opening it for me because my hands were full, and I had a note and a rose.” That was the first step in an elaborate proposal where he left notes and roses instructing her to go to where they had their first date [Dodiyos];  where they went after their first dinner [Highland’s Bar], and lastly where they had their first kiss. “When she walked around the corner, I was down on one knee in front of Hot And Hot Fish Club. She said ‘yes’, and our parents were inside watching, so after I proposed we went inside and had dinner with them and celebrated.”

Once she opened the door and saw the envelope Amanda said she pretty much knew what was happening and got emotional. “The note was in a Diamonds Direct envelope, and inside it said, ‘you’re my dream girl and I’ve been wanting to do this for a long time. Meet me at the place we had our first date’ . . . by the time I got the last letter I didn’t know if he was going to be there or if I was going to get another note, but he was there and it was the most amazing, emotional, thoughtful, sweet moment you could ever imagine.”

The wedding: At Vulcan Park and Museum, officiated by Pastor Blake Lindsey [Church of the Highlands]. Their colors were blush, navy, cream and gold.

Most memorable for the bride was a moment they shared during their first looks at one another. “…he was whispering into my ear saying that he knew that as happy of a day as it was, he knew I still wished my aunt Janine was there [she passed away a year prior from skin cancer], and it was so special to me that he acknowledged her. I got emotional because she was my best friend,” Amanda said. “If she was alive she would’ve been my maid of honor…”

Most memorable for the groom was also the moment they shared during their first look. “We did pictures before the wedding and had a one on one moment on the side [of the museum] and the photographer captured it. It was emotional, seeing how beautiful she was, the day was perfect,” said Antjuan.

They honeymooned in Turks and Caicos for a week. A memorable moment was walking into local spot named Johnny’s Dive Bar and the reggae version of ‘All of Me’, by John Legend was playing and that was our wedding song. We played it the whole vacation,” Amanda said.

Words of wisdom: “One thing I remember that [Pastor] Blake Lindsey told us in our premarital counseling is we had to commit to never getting a divorce in order for him to marry us because marriage is a commitment,” Amada said. “It’s not always going to be perfect but we have to decide that with each other is who we want to spend the rest of our lives with, no matter good or bad, when we’re having a disagreement, and I think of how much I love him and how much good he brings to my life … You have to have the mindset that the commitment is for life.”

Happily ever after: The Spivey’s have two children: daughter, Emery, 2, and son, Lennox, four months.

Amanda, 35, an Alabaster native and Thompson High School grad, attended the University of Alabama at Birmingham [UAB], and earned a bachelor of arts degree in communication studies. She works in the pharmaceutical sales industry for Regeneron, based out of New York.

Antjuan, 33, is a Center Point native and Ramsay High School grad. He attended the University of Alabama at Birmingham [UAB], where he earned a bachelor of science degree in biology. He is an oncology sales rep for Merck.

The Spivey’s said that field work has slowed down for the both of them, and they primarily work from home. However, Antjuan has begun going back out into the field for meets.