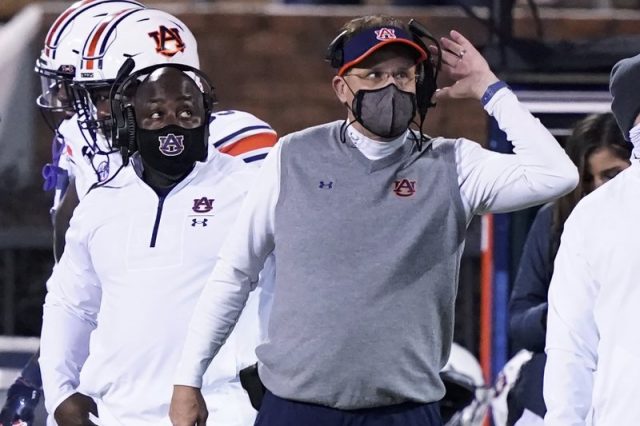 Auburn has fired coach Gus Malzahn, who led the Tigers to the national championship game in his first season but could never replicate that success.

Athletic director Allen Greene announced the firing on Sunday, a day after the Tigers finished the regular season with a 24-10 victory over Mississippi State. They’re 6-4 in a pandemic-shortened season of all Southeastern Conference opponents, getting blown out by highly ranked teams Alabama, Georgia and Texas A&M.

They were also upset by a struggling South Carolina, which wound up firing coach Will Muschamp during the season.

“After evaluating the state of the Auburn football program, we’ve decided that it was time to make a change in leadership,” Greene said in a statement. “We appreciate everything that Gus did for the program over the last eight seasons. We will begin a search immediately for a coach that can help the Auburn program consistently compete at the highest level.””

Defensive coordinator Kevin Steele will be interim coach. Auburn will owe Malzahn a $21.45 million buyout for the remaining four years of a seven-year, $49 million deal.

The school must pay half of that within 30 days.

Malzahn went 68-35 in eight seasons and was 39-27 against SEC opponents. He led the Tigers to an SEC title in 2013, his first season, losing to Florida State in the national championship game.

Auburn said Greene recommended the firing to President Jay Gogue after conducting a “thorough analysis” of the program.

Known for his his uptempo, spread-like offenses, Malzahn was offensive coordinator in 2010 when quarterback Cam Newton won the Heisman Trophy and led the Tigers to the national title. He called offensive plays for much of his tenure, but he struggled to develop other passers, including Jarrett Stidham and Jeremy Johnson.

Current starter Bo Nix was a prized recruit but has been inconsistent in his two seasons and hasn’t appeared to progress much as a sophomore. Other quarterbacks have transferred, including Malik Willis (Liberty), Joey Gatewood (Kentucky) and Woody Barrett (Kent State).