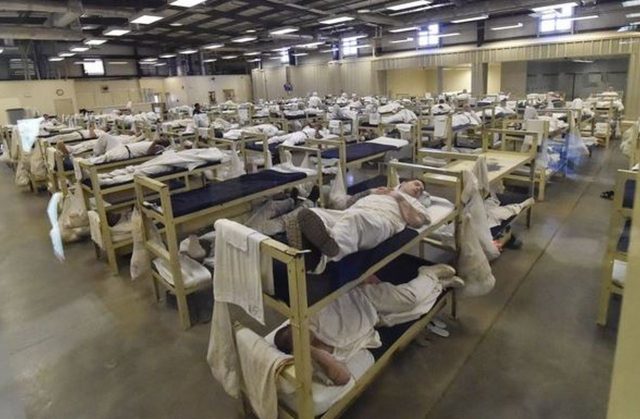 The U.S. Justice Department on Wednesday filed suit against the State of Alabama and the Alabama Department of Corrections alleging that the conditions at Alabama’s prisons for men violate the Constitution.

“The United States Constitution requires Alabama to make sure that its prisons are safe and humane,” said Assistant Attorney General Eric Dreiband for the Civil Rights Division.  “The Department of Justice conducted a thorough investigation of Alabama’s prisons for men and determined that Alabama violated and is continuing to violate the Constitution because its prisons are riddled with prisoner-on-prisoner and guard-on-prisoner violence.  The violations have led to homicides, rapes, and serious injuries.  The Department of Justice looks forward to proving its case in an Alabama federal courtroom.”

Gov. Kay Ivey issued a statement saying she was disappointed in the lawsuit.

“This is disappointing news, as the state has actively been negotiating in good faith with the Department of Justice following the release of its findings letters,” Ivey said. “Out of respect for the legal process, we unfortunately cannot provide additional comment at this time. We will, however, push forward with our plan to reimagine and rebuild Alabama’s correctional system from the ground up through the construction of three new regional men’s prisons. The comprehensive efforts underway will go a long way in addressing the long-standing challenges faced by the Alabama Department of Corrections.”

Acting U.S. Attorney for the Northern District of Alabama William R. Chambers, Jr. said, “Our office is committed to ensuring that all citizens’ constitutional rights are respected. We will continue to work tirelessly to correct the constitutional deficiencies identified by our investigation into the state prison system.”

“­­­­­­­­­­­­­­­­­The results of the investigation into safety and excessive force issues within Alabama’s prisons are distressing and continue to require real and immediate attention,” U.S. Attorney for the Middle District of Alabama Louis V. Franklin, Sr. “We hope the filing of this complaint conveys the Department’s continued commitment to ensuring that the Department of Corrections abides by its constitutional obligations.”

“The COVID-19 pandemic has reminded us that one of the primary responsibilities of government is to keep our citizens safe,” said U.S. Attorney for the Southern District of Alabama Richard W. Moore. “That responsibility extends to citizens incarcerated within Alabama prisons.  Our investigation has demonstrated that constitutionally required standards have not been met in Alabama prisons and this must be corrected.  I am disappointed that the efforts of both Alabama officials and DOJ officials to find appropriate solutions have not resulted in a mutually agreed upon resolution.  Our oath as public officials now requires us to follow the Constitution and to pursue justice in the courts.”

The DOJ said for over 20 months it has engaged in negotiations with the state without achieving a settlement that would correct the deficiencies identified by the department’s investigation.

Ivey, Alabama Department of Corrections Commissioner Jeff Dunn, and other officials have said new prisons are an essential part of a larger plan to overhaul the state’s troubled system.

The plan for three new prisons calls for the developers to finance, build, and maintain the prisons, which the state would lease and operate. Proposed sites are in Bibb, Elmore, and Escambia counties. Some of the state’s existing prisons would close.