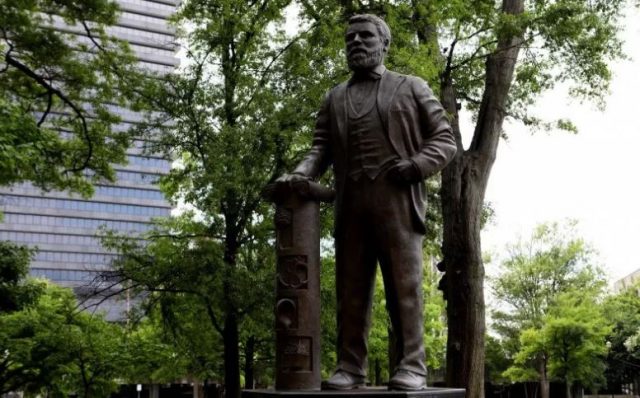 The seven-acre park that separates Birmingham City Hall and the Jefferson County Courthouse in downtown also may also have been the site of the county’s first lynching, according to a local grass-roots coalition that documents racial terror.

The Jefferson County Memorial Project (JCMP), composed of over 40 community partners, researches the untold history of lynching in the county and the historical links among slavery, Jim Crow and present-day mass incarceration.

Their latest report, “Contested Terrain: A Historical Walk Through Birmingham’s Linn Park” was written by JCMP Fellows, a group of 20 college and graduate students from Birmingham-area colleges: Jefferson State Community College, Samford University, Birmingham-Southern College and the University of Alabama at Birmingham (UAB).

“Through that research we’ve learned that Lewis Houston was our first documented lynching in Jefferson County,” said Joi Brown, Director of JCMP. “His story and the park’s placement between Birmingham City Hall and Jefferson County Courthouse, makes us believe that Linn Park is the best place to establish JCMP’s next memorial.”

As part of its work, the group educates the public on the importance of racial history and places historical markers at lynching sites.

In the new report, Fellows examined the history of Linn Park, called Capital Park when it was founded in the 1890s and renamed in 1988 for Charles Linn, a pioneer industrialist, banker and captain in the Confederate States Navy, who created the first landscaped park in the city. Each fellow researched a different decade of the history of the park from the 1880’s up to 2020.

Aubrie Strange, a student at Samford, who researched the 1890’s said Confederate monuments were erected in the park prior to the 1890s, “nearly 30 years since the close of the Civil War.”

“You put a tombstone on a grave where a person died, so why are we erecting these monuments to dead Confederate soldiers 30 years after the war is over? I think that was something that really shocked me and was really interesting about the history.”

Linn Park, specifically the Confederate Monument became a target for vandalism during protests last year over the death of George Floyd, a black man killed by police in Minnesota. On the evening of May 31, a large group many tried to take down the statue before Mayor Woodfin arrived and asked the crowd to leave, promising to remove the memorial within 24 hours which he did.

Laura Quattrochi, a UAB master of anthropology student who researched the 1910’s, said Confederate veterans held a reunion rally at the park in 1916.

“I found it really intriguing and appalling how 15,000 Confederate veterans and guests traveled to Birmingham and referred to this as the reunion of the brave,” said Quattrochi. “Another thing that I found intriguing was that there was a parade that was about 15 blocks long and had Boy Scouts marching with [Ku Klux] Klan members.

Finding information on this topic was challenging especially “since I wasn’t able to physically access any archival records at the libraries due to COVID, but the trickiest part was coping with the fact that America has not progressed much since 1916 it seems like,” she said.

Following the 1910’s leading up to the Civil Rights Movement, fellows said their research began to shift, learning more about Birmingham’s Black community in relation to the park.

Libby Rau, a senior at Samford, who researched the 1920s said she was impressed by the resilience of the Black community in Birmingham during the racial violence and the oppression of its time.

“Coming into this decade, President Wilson’s segregationist policies and the unwillingness to pass anti-lynching legislation gave agency for white supremacy, especially in the South… but Black Birmingham residents really persisted in living out their values and rights,” Rau said. “For example, during President Harding’s speech in 1923, they were only allowed a little section at the end of the park to listen… they were not afraid to cheer when President Harding advocated for their economic and political equality.”

Lauren Barnett, a sophomore at Birmingham-Southern researched the 30’s with a focus on Confederate Memorial Day Services held at Linn Park.

“Those services were used to glorify the confederacy and uphold Confederate ideals long after the Civil War had ended and one of the things I found most surprising was how explicit the lost cause language that they used truly was within these primary sources,” said Barnett. “We know these ideals were prevalent throughout this time period but just to see them written in these newspapers as I was searching was shocking.”

Donnae’ Hampton’, a student at UAB researched ‘50’s and her research focused on a General Dwight D. Eisenhower presidential rally.

“I believe he was the first presidential candidate to come down to Alabama to campaign,” she said. “What I took from that was to look at his administration and what struck me the most was his complicity which actually helped to accelerate the Civil Rights Movement we see in the 1960’s,” said Hampton. “Many Civil Rights activist of Birmingham and through the South wrote letters to him and pleaded with him to say something about the racial terror and violence that Black people were facing in the South.”

During the Civil Rights Movement of the 1960’s, Birmingham was one of the key cities that was at the heart of the movement.

Jones Willingham, a senior at Samford University, said not much was written about the park during that time.

“You would think that the 1960s where we’re in the heat of the Civil Rights Movement and the Birmingham Campaign of 1963, which starts right down the street at Kelly Ingram [Park] and eventually makes its way to City Hall, there would be something about Linn Park in there,” he said.

“The local newspaper did not want to write anything about it. I dug and dug and dug and it took me looking through the Birmingham World, the African American newspaper at the time, to find any reference of any events that happened during the Civil Rights Movement at Linn Park or here in Birmingham period. That was surprising but it helped me shape my research by asking the question ‘why was it avoided?’”

Economics may be one reason why, he said.

“The City of Birmingham figured out they could make money as a tourist attraction, so you have all of these festivals and events going on [in Linn Park] for predominately white audiences and they don’t want to touch the stuff that’s going on with Black people . . .” he said. “Even though it was incredibly frustrating to have to dig deep to find these sources, it was ultimately rewarding to show the difference in for Black and white populations, especially in Birmingham.”

The focal point for Tidwell’s research was the beginning of City Stages music festival held in Linn Park.

“I was excited to research the beginning of what I think was a point of Birmingham pride, which was the inception of the City Stages festival,” said Tidwell. “I knew that was something I could count on, but I was shocked to find as late as 1979 and in 1980 that there were Klan rallies in the park in response to things like marches to commemorate Dr. King’s death.”

Leo Proctor, a sophomore at Birmingham-Southern researched 1990-2000. “I was looking for things that could be representative of the decade and contribute to a lot of the themes of this serious duality going on with Linn Park with having someone murdered in the park and days later a politician giving a speech, you could have a Klan parade and the next year you have a public music festival,” he said.

“What I discovered was the case of a person named Benny Rembert who was a homeless man living in downtown Birmingham who was murdered in 1992 by four teenagers, who were loosely associated with a white supremacist, skinhead organization called the Arian National Fund,” said Proctor. “This was a lynching and what you see happening in Linn Park after that event is that duality perpetuated and continued in the most intense way. A month after his murder, 700 people took to the park to hold a vigil to protest white supremacy and denounce this growing uptick in what had been white supremacist activity in downtown Birmingham.”

Sarah Morgan Lake, a senior at Samford University researched the decade and also focused on the popular City Stages, mainly the rise and fall of the festival from 1990 to 2009.

“What drove me was the hope that I found especially in my decade that did have this focus on making Linn Park into a space that anybody from any cultural ethnicity or background could enjoy, that hope that Linn Park could be used as that because of the work that the Jefferson County Memorial Project is doing is what kept me going in my research,” she said.

According to Lake’s research, the first City Stages festival was held in 1989 on Father’s Day weekend and founded by George McMillan, an Auburn University alumni and former lieutenant governor. McMillan’s vision was clear: to bring his adopted hometown some entertainment and spiritual uplift.

That vision rang true until the festival’s demise in 2009.

“The City Stages music festival may have only lasted two decades, but it’s impact on Linn Park is important to recognize,” said Lake. “Formerly a place of lynching, violence, racist campaign speeches and disrepair, City Stages used Linn Park as the central point and heart of Birmingham every year in June. This space has the potential to bring people together across divides while sharing, remembering and taking part of Alabama’s and Birmingham’s history.”

Last summer, racial tensions began to erupt across the United States after George Floyd, a Black man was killed by police in Minnesota. His death struck protests across the world including in Birmingham, which resulted in a Confederate Statue in Linn Park being taken down.

“It’s been the peak of our generation so we’ve seen a lot of civil unrest not only in Birmingham but worldwide as far as civil rights, human rights and international rights,” she said. “ . . .  after all of the years why are we still having this conversation of people being killed and it’s happening too frequently. My main goal with my research was to educate people on having those conversations even though it is a traumatic experience… there is work that still needs to be done.”

Strange, the student at Samford who researched the 1890s, said her study has been a good experience “looking at collective trauma and memory of a place, it’s much easier and more frustrating to do research on people because there is a human emotion tied to that this has taught me how to analyze a space,” she said.

Rau, who researched the ‘20s said it’s crucial to elevate Black perspectives in spaces where they have been silenced in the past due to racial violence and terror and intimidation. “I think that’s such an important part of our collective memory and I think it’s easy when we’re using our public research when all of the resources come from white spaces… I think it’s important to give back the voices of Black people in history.”

To view the report, visit www.jeffersoncountymemorial.com/33-victims