Most 16-year-olds spend some time during the school day involved in extracurricular activities around campus, but not J’Corion Johnson—he spends his time running a business.

The junior at Ramsay High School on Birmingham’s Southside is the owner and founder of Raw Abiding Citizens (RAC), a colorful, youthful clothing brand that reflects not only Johnson’s creativity but also his personality. The brand is made up of a diverse selection of T-shirts, jogging suits, dresses, jumpsuits, and ski masks that sell for between $8 and $40.

In March, Johnson presented the RAC and Friends show at the Palmerdale Homesteads Community Center in Pinson, Alabama. The event—which featured his brand, three other brands, 15 vendors, and a hair show in the middle—provided look into Johnson’s future endeavors and served as a one-year celebration of his business.

“I’m the type of person who had everything set up two weeks in advance,” said Johnson, whose show included 28 models, some who were friends and others who were customers.

In line with his dedication to doing things ahead of time, Johnson put out a survey late last year that gave people an opportunity to enter their information if they were interested in modeling: “From there, we had 80 to 90 models in total,” he said.

A friend, Kennedy Whisenant, who is also a model, helped teach the models how to walk and gave them formations for the stage.

“For it to be my first show, I think there was a pretty good turnout,” said Johnson. “From the reaction of the people and even my mom, … [people] were really excited and proud, … and they were buying clothes.”

A Star is Born

Johnson was born in Sylacauga, Alabama, but his family moved around a lot: “I’ve been everywhere,” said Johnson, who now he lives on the eastern side of Birmingham in the Roebuck/Pinson area.

From the very beginning, Johnson’s mother, Raven Evans, saw his star quality. When he was younger, they would travel to auditions for movie roles or extra parts. He even had a scene in the 2016 movie “Mother’s Day,” starring Academy Award-winning actress Julia Roberts, but “they cut the scene,” she said.

“In my mind I was like, ‘Oh, he’s going to be big. He’s going to be great … because of his personality,’” Evans added. “He still reflects [those traits] in his business.”

Of his on-screen appearance, Johnson said, “I did a lot of short films with celebrities. That summer, [2016], I did a short film with a lady in Montgomery, as well as a music video, and she sent out the information to me about the part with Julia Roberts.”

Johnson auditioned regularly, starting in 2012, when his family lived in Montgomery, Alabama. They moved to Birmingham in 2016, so Evans could teach and Johnson could attend the Alabama School of Fine Arts (ASFA).

Johnson auditioned for ASFA in 2015, for his seventh grade year. He attended the John Herbert Phillips Academy from 2016 to 2018, for seventh and eighth grades. He went on to attend the Jefferson County International Baccalaureate School (JCIB) from 2018 to 2019, for his freshman year, before transferring to Ramsay.

While at JCIB, located in Irondale, Alabama, Johnson set up his first business, Trending by J’Cor. The T-shirt-selling venture started as a passion project, which was a requirement for exiting the school’s Middle Years Programme (MYP).

“When I presented my project, … I launched my website,” he said.

His first piece was a white T-shirt with a splatter of colorful paint and “J’Cor” in the center.

“When I started, I wasn’t looking at doing this forever. I was looking at it more [from a financial standpoint],” said Johnson.

But then his mother mentioned she would be more likely to go somewhere and buy a set or an outfit rather than just a shirt: “That’s what made me start looking into outfits,” Johnson said.

When conceptualizing designs, the young entrepreneur sees things he likes and “re-creates them with a twist or a way to incorporate it for my brand,” he said, adding that other times he simply plays around with different styles and colors to find a theme he likes. Johnson’s first pieces of clothing other than T-shirts were an orange skirt set and a black jumpsuit with an orange outline.

Things changed when he transferred to Ramsay, though.

“When I got there, I kind of just shut down,” he said. “It was not just because of the change of environment, but I got to the point where I was unmotivated. … There was a lot going on with trying to adapt to a new environment and trying to do the business at the same time.”

His motivation returned when he learned that “more people had seen my business than I actually thought,” he said.

Many of Johnson’s classmates from Phillips had not only kept up with him on social media and but also joined him at Ramsay: “[My classmates] encouraged me to start back up,” he said.

One classmate reached out to him randomly via social media late one night with a message: “Stop playing and start your clothing business back up.”

“I will never forget that,” Johnson recalled.

In March 2020, Johnson relaunched his business but did things differently.

“At the time, the word ‘Raw’ was really popular, so I [thought of] Raw Abiding Citizen,” he said. “At first, I said that as a joke. Then I said it to some of my friends to see what they thought, and they were like, ‘That’s a really good name.’ My aunt said the same thing, so I said, ‘OK, well, I guess I can move forward with that.’”

To incorporate different types of clothing into this brand, Johnson sends his designs and ideas to a manufacturer. When he receives the items from the manufacturer, he places the logos on them himself.

It Takes a Village

One of Johnson’s most ardent supporters is his aunt, Brittany Evans. “She was a big part of why I could go ahead and order the clothes beforehand,” Johnson said.

While planning his initial fashion show, Johnson was working at a local entertainment venue and a large retailer. Still, he was faced with the dilemma of figuring out how he was going to order approximately $3,000 worth of clothes. His aunt told him to use her credit card and to pay it off with what he made from the fashion show; whatever was left, she said, would be his profit.

Johnson’s support goes beyond his family. Several of his friends not only purchased his pieces—without asking for a discount—but also played a part in helping the fashion show become a success. Some participated in the show through their brands or helped behind the scenes. Some even offered to help with a last-minute unexpected fee, but “I wasn’t going to take their money,” Johnson said, adding that the amount of support he received was a bit overwhelming.

Johnson’s biggest supporter is his mother.

“I could never repay her,” he said of his mother, who has helped equip him with the tools he needed to start his business, including a heat press, the vinyl, his camera, and more, because he didn’t have the money. She drove him around when he didn’t have a driver’s license and helps with taxes and paperwork.

“It was literally just her, me, and a dream,” Johnson said. “No matter how much money I could give her, it feels like from the time that she’s put in, especially the time she put in when I didn’t have [the money], it still won’t make up for it. I know she didn’t have to do it, [but] I’m grateful that she did.”

Evans is extremely proud of her son.

“He has the vision,” she said. “Because I know he has the vision and the ideas and [because of] the things he comes up with, I’m willing to support him as far as he wants to go.

“If he wants to go to college, if he’s able to get a storefront, or whatever the case may be, I know that my daughter, my mom, and I will be here to support him. I don’t want him to ever feel like he has to choose between [school and his business]. … We’re going to support him no matter what.” 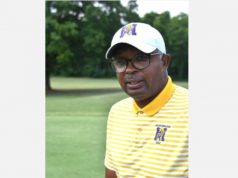 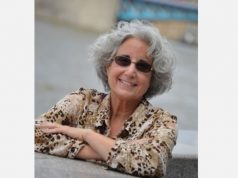 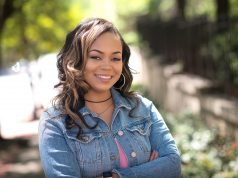