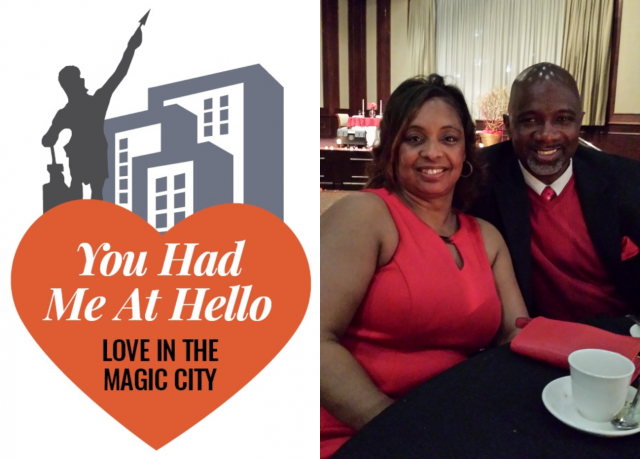 Met: January 1996, in Korea at the Osan Air Force base in their dormitory. Peggy said she saw him first.

“I saw Carl or the first time at a Bible study. He came in late and I noticed how sharply dressed he was and how knowledgeable he was in the word of God,” Peggy remembered.

Carl said he first noticed Peggy during a card game the following month.

“…Peggy walked in the room and in my spirit I heard ‘that’s her’, and I looked up and saw her pass by. … I was too afraid to think anything or talk to her because of the [supernatural] way that it happened,” Carl said. “Hearing that voice in the spirit was frightening.”

The next month Carl and Peggy were out bowling with a group of mutual friends when they finally said hello.

[In March] “I had [come back stateside] for a few weeks and I was thinking about her the whole time, said Carl.

Peggy remembered in mid-March that “Carl called me at my office on base and asked me to lunch.”

First date: March 1996 at Burger King on the Osan base.

Peggy remembered talking about past relationships and what they wanted out of life. “…I told him that at that time I was not looking to get into a relationship because I had just rededicated my life to Christ and that’s where my focus was.”

“I was fine being friends, but I was persistent in my pursuit of that friendship if you know what I’m saying,” Carl said.

The turn: For Peggy, it was June 1996 following a foot surgery.

“He had started cooking and cleaning and washing my clothes,” Peggy laughed. “He took me by surprise…I was impressed. I enjoyed his company and decided

to give us a chance.”

For Carl, it was early May 1996. “I was a bad financial manager during that time of my life and one day she asked me to go to the movies and said, ‘I don’t have any money’, and she said ‘I didn’t ask you if you had any money, I asked if you wanted to go to the movies’. That was the first time [in a relationship] that someone didn’t care about [money], and that was a turning point for me,” Carl said.

The proposal: July 1996, at Peggy’s off base apartment in Osan Village.

“…I had a 10-year-old bottle of sparkling grape cider and I had gotten some champagne glasses and put the ring inside the glass and poured the cider on top,” Carl said. “I walked into her bedroom with the glasses and I got down on one knee on the side of the bed and proposed to her. I said something to the effect that `God told me that you were [my wife], I was afraid at first, but after spending time with you I know that I don’t ever want to be without you. I know that if we go our separate ways my life would never be the same. So if you would do the honor of being my wife, we’ll never have to part’,”

Peggy did not say ‘yes’ right away. “I was 32 years old and didn’t know anything about being a wife, and knew I would have to give up my independence because [I’d have a life partner now], and I’d have to start sharing things. I was hesitant at first, but after about two or three minutes I said ‘yes,’”.

“It wasn’t no two or three minutes,” Carl laughed, “my knee had started hurting by the time she said ‘yes.’”

The wedding: At the base chapel in Osan, officiated by the base chaplain. Their colors were lilac, purple, black and white.

Most memorable for the bride was Carl’s serenade. “During the ceremony, Carl sang ‘Love Me (The Way You Do)’ by Anointed, and he had that song down pat. All I could do was smile and say ‘I love you, I love you’ over and over again. It was like I was the only one in the room,” Peggy said.

Most memorable for the groom was the moment the chaplain “told me I could kiss my bride,” Carl said, “I kissed her so long the chaplain started blushing and turning red.”

The couple honeymooned in Seoul, Korea for a week. “We enjoyed walking around holding hands and being away from the base,” said Peggy. “We stayed in a very nice hotel . . .” said Carl.

Carl said the key is really learning who your spouse is. “Learn what your spouse likes. Today’s popular thing is the five love languages. Communication happens in many ways, so when I communicate in her language [for instance] acts of service, when I clean up around the house and help her do things, that builds unity,” he said. “The last thing I will say is that husbands can never forget that we have been given a helpmeet… God has given us someone to help us meet the destiny that He has for us… How we love and grow is a major responsibility of the husband, not his alone, but his to steward

Happily ever after: The Jenkins’ have two children,  Brittney, 28, from Carl’s from a previous relationship, and Darius, 22.

Peggy, 57, is a Spartanburg, South Carolina native and Spartanburg High School grad. She attended Park University [Missouri] where she earned associate’s and bachelor’s degrees in business, and master’s of business administration [MBA] with a concentration in accounting. Peggy retired from the US Air Force after 25 years where she worked in logistics.