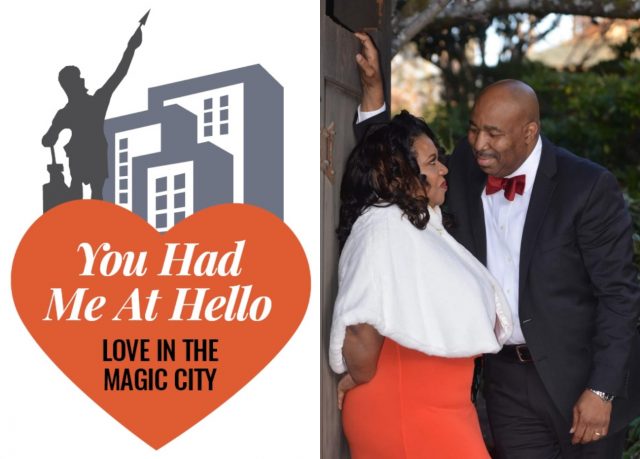 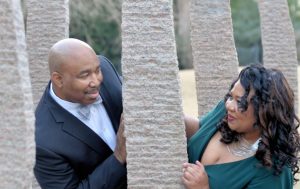 Met: Cheryl and Kentray met Spring 1997, through a mutual friend, Andre Davis, who said he knew that perfect girl for Kentray.

“I think God used Andre to connect us together,” Kentray said. “I had been praying that God would help me find someone that had beauty on the inside and the outside, and who would be able to assist me in the walk He had for me at that time in my life. Andre gave me Cheryl’s number, and I gave her a call.”

“Andre told me he had a friend who would be calling me, but it took Kentray so long to call. Eventually, Kentray did call and we had a very nice conversation,” Cheryl said.

The two hit it off over the phone, but had conflicting schedules making it hard to meet in person but a few weeks later they planned a breakfast date that they were able to keep.

First date: Breakfast at Shoney’s in Irondale. “At the time I was doing floor nursing [at UAB Hospital] and was working three days on and four days off, and because of [scheduling] we ended up doing a breakfast date,” Cheryl said. “I was a little nervous. He had got there before I did. I didn’t have to wonder how the date went because at the end he said something like ‘when we do this again’, and that let me know I knew it went well. He was very nice and easy to talk to.”

“Andre never gave me a description of her, he never showed me a picture, he just said she was ‘good people’. I was sitting by the window watching people come and go and eventually this beautiful girl pulled up in a green Mazda MX6, and got out of the car wearing a nice short set, and I said ‘Lord, please let this be her’,” Kentray laughed. “The date went well, I don’t think we ate that much that morning because the conversation was flowing so well. We were sharing our experiences in life… I had just moved to Birmingham from Texas a year prior, and we were talking about why I moved back to Livingston [Ala.] and then moved up to Birmingham…, just good, easy conversation.”

The turn: For Kentray it was when he talked to Cheryl about his walk with God. “I was working with the youth in my church at that time [Morning Star Baptist Church, in Livingston], and I was trying to come up with a program that would help young people… One night when I was trying to come up with a name [for the program] and I was stuck, and she [helped me name the program, which is] ‘H.Y.P.E in Christ– Helping Young People Excel in Christ’,” Kentray said. “It’s about evangelizing to young people, and that night she completed what God was dealing with me on. That was the turn for me because I knew that she would be able to work with me in whatever my call in God was.”

For Cheryl, it was simple, “I enjoyed spending time with Kentry,” she said. Summer 1997 the couple took day trips to visit their alma mater’s. One weekend they went to Tuskegee University, Cheryl’s alma mater, and she showed Kentray around, and the next weekend Kentry took Cheryl to his alma mater, Alabama Agricultural & Mechanical University and visited the campus and the Space and Rocket center in Huntsville.

“That’s when we realized we could spend long periods of time together,” Cheryl said. “We had a great time, there was never a moment that the energy was odd, it was free flowing conversation and interaction. That time was valuable to us,” she said.

“I invited Cheryl and her grandmother to attend with me at my church — which ironically, years later, is where I now pastor — and I had plans to propose after the service. Service was ending and the pastor called the attention of the congregation and called me down to the front, and then I invited her to join me at the front of the church, and I got down on one knee, I presented her with a ring and proposed to her,” Kentray said.

“I was thinking why am I being called to the front of a church that I am not a member of, what’s really going on?,” Cheryl said. “I got to the front and I was looking around and he got down on one knee and asked me to marry him and I said ‘yes’.”

Most memorable was “when the church doors opened and I saw all my family and friends, and Kentray at the end of the aisle,” Cheryl said. “It was like ‘wow, we’re really doing this today!”

Most memorable groom was lighting the unity candle. “After lighting and blowing out the candles we stayed there for a moment and had a conversation… There were some commitments during that time that I made to her as we became one. We took that time to have a conversation, we talked about our commitment to one another and here we are almost 22 years later,” Kentray said.

“It was the first time I had been on a plane and the [weather/altitude] differences had me sick by the time we landed. But we had a good time,” Cheryl said.

Words of wisdom: “The earlier you can learn how to make the necessary adjustments in your relationship the better,” Kentray said. “That’s very important when two people are coming together as one. Learning that it’s not always going to be your way is a necessary adjustment so that at the end of the day you’re still moving in the same direction. There has to be some give and take. In order to do that, you must keep God in the center; without Him, we never would’ve made it…that’s what our relationship is centered around, me, her and Him.”

“Communication is very important. When you get married you gotta remember that each of you come from two different villages. You have to learn how to mesh some of your village and some of the other village together to make it work,” Cheryl said. “You can’t just say ‘this is how we do it’, or ‘he or she should have known this or that’. You really have to talk it out and come together to make your own village.”

Happily ever after: The Sims have three children: son Keydren, 36, from a previous relationship, and daughter, Brelyn, 19, and son Kentray Jr. ‘KJ’, 14.