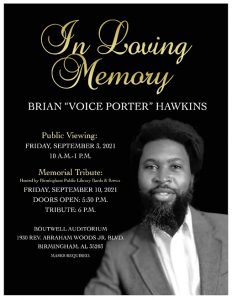 On Friday, September 3, from 10 a.m. to 1 p.m., a public viewing of Hawkins will be held at the Boutwell Auditorium in downtown Birmingham, 1950 Rev. Abraham Woods Jr. Blvd. Masks will be required.

On Friday, September 10 at 6 p.m., also at the Boutwell Auditorium, BPL’s Bards & Brews is hosting a Memorial Tribute to Voice Porter, featuring poetry by some of the top spoken word poets in Alabama paying tribute to Voice Porter’s legacy. Doors will open at 5:30 p.m. Masks will be required.

Voice Porter’s on-stage charisma and powerful poetry touched lives across the nation, as evidenced by the outpouring of positive posts that flooded social media last week after his untimely death. Coffee giant Starbucks featured Voice Porter in a national spotlight in August 2019.

Veteran Bards & Brews poets such as Jahman Hill and Kevin Lovell credited Voice Porter for encouraging them in the spoken word genre.

In addition to receiving accolades for his poetry, Hawkins was known for his passionate support of uplifting Ensley. He was executive director of The Color Project, an initiative using the arts to address poverty and crime in Ensley.

Birmingham Mayor Randall Woodfin, in a Facebook post after Voice’s death, said “The entire city of Birmingham mourns the loss of Brian Voice Porter Hawkins.” He was a true advocate for our city, unapologetic in his truths and his words never failed to stir us…”

Media inquiries (only) about the Voice Porter public viewing taking place Friday, September 3, from 10:00 a.m. to 1:00 p.m. at the Boutwell Auditorium should be sent via email to Bettina Byrd Giles at Bettinabyrdgiles@gmail.com.

Media interview requests related to the Friday, September 10 BPL Bards & Brews Memorial tribute slated for Friday, September 10, at 6 p.m. at the Boutwell Auditorium should be sent to BPL PR Director Roy L. Williams via email at roy.williams@cobpl.org or by cell to (205) 568-0067.