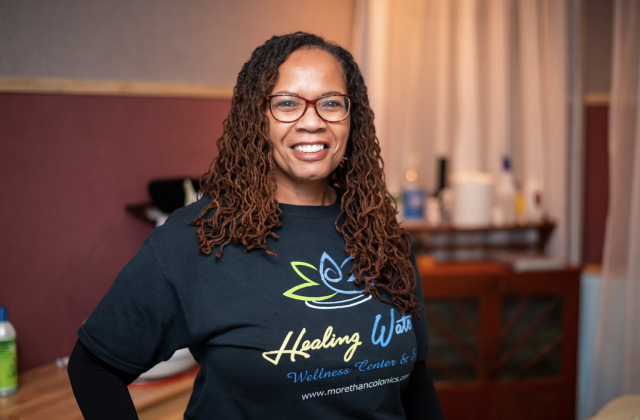 Elicia Jacob knows about survival on a professional and personal basis. She grew up in Los Angeles, California, in the 1970s and 1980s, when gangs were prevalent in the city.

“I had the blessing of growing up in a middle working-class neighborhood,” she said. “I was never influenced negatively as much as I could have because my mom was not going to have it. … It was all about taking care of each other and getting your education. … My mom was a stickler about that.”

Jacob, who earned a Doctor of Nursing Practice (DNP) degree from the University of Alabama at Birmingham (UAB) in 2014 did exactly what her mother told her—she got her education and is now taking care of others through Healing Waters Wellness Center and Spa, which is located in Birmingham’s Southside community.

At Healing Waters, Jacob and a team of six offer a broad range of wellness and spa services, including colon hydrotherapy, BioCleanse foot baths, and sauna detoxes. The most popular treatment is colon hydrotherapy.

“Through that service, we remove toxins from your body,” Jacobs explained. “When those toxins are removed, it eventually leads to weight loss, better digestion, increased energy, and clearer thinking. Our goal is to promote more natural healing practices for your body.”

“My most memorable was a lady who traveled all the way from Africa,” Jacobs recalled. “Her family flew her in because she had not had a bowel movement for 27 days and her skin was dull. I did a series of 12 colon hydrotherapy sessions with her, and the after results were amazing. When she left, she was glowing and healthy.”

Jacobs believes in “the power of the body to heal and cleanse itself.”

“Your body is capable of so many things, and I really wanted to shed more light on our ability as people to [heal our own bodies],” she said. “Before I [started at] Healing Waters, my main goal was to open a wellness retreat in the state of Alabama.”

When Jacobs developed her business plan for the retreat in 2014, she wasn’t taken seriously.

“The guy from the [U.S. Small Business Administration (SBA)] looked at me and laughed,” she said. “He told me, ‘Alabama is not ready for anything like this.’”

“My plan was very elaborate,” Jacob added. “I planned to offer all of the services now offered at Healing Waters at the wellness retreat, in addition to other [amenities], such as a restaurant, garden, and other good stuff so people could come, stay, and heal. … I’ve been into healing since I can remember. … I know it’s taboo to say that you can heal, but I teach people how to heal themselves. … That’s what I do.”

In 2018, Jacobs says she then “revamped” her business plan, and presented it to Bob Dickerson with the Birmingham Business Resource (BBRC). “He connected me with people from Renasant Bank who were really able to make my dream come to fruition.”

“I really want to stress what an important resource he was. I want people to understand that if one door closes, another one can surely be opened.”

Jacob, 56, was born and raised in LA and comes from a “family of entrepreneurs,” she said.

“My father, [who was a longshoreman and still lives in California], owns several properties there. My mother has done a number of things, but her most noteworthy would have to be owning a beach resort on the island of Anguilla, [a British territory in the Eastern Caribbean]. And, before them, my grandparents owned a restaurant and mercantile store,” Jacob said.

“So, from my grandparents on both sides to my mother and my father, having ownership of something is in my blood. I was destined to open my own [business] one day.”

Jacob graduated from LA’s George Washington Preparatory High School with honors as the “top of her class” in 1983.

“During my time in school, I actually did the nursing assistant certification program,” she said. “I really have been in the business of health since I was about 14. I served as a volunteer at the Spastic Children’s Foundation, [an organization active in the prevention or treatment of birth defects and genetic diseases], and really dedicated my time to what I really enjoyed.”

In 1984, Jacob enrolled at Louisiana’s Southern University, where she majored in general studies because she “wanted to go to medical school one day,” she said.

After her first year in college and the birth of her daughter, Yentl, Jacob moved back to LA.

After Yentl was born, Jacob was working as a receptionist at a trucking company, and she got “really sick” one day at the office.

“I didn’t know what was going on, so I went to my mom’s house and said, ‘Look, something’s not right. I’m not feeling well,’” Jacob recalled. “[My mom said], ‘Go in there and lay down. My friends and I are going to pray for you.’ I said, ‘Momma, I can’t lay down. I can’t breathe. I’ve got to get to a hospital.’ When I got there, they found that I had a blood clot in my lung.

“I was admitted to the hospital and put on blood thinners. The doctor did a bronchoscopy and accidentally punctured one of my lungs; the other lung was already collapsed.”

Jacob blanked out during the ordeal. When she came to, she knew that she had been given a second chance.

“I credit that experience for making me who I am today,” she said. “I was given the opportunity to live again, and I said, ‘I’ve been given this opportunity, so I have to figure out what I’m supposed to be doing.’ … I felt like that was in the health field.”

In 1988, Jacob moved to Birmingham. She eventually enrolled in nursing school at Lawson State Community College.

“I come from a family of nurses and health care workers, too,” she said. “One uncle and three of my aunts are registered nurses, and I have countless other cousins in the nursing field. Also, one of my uncles is a dentist. … That’s really what our family does.”

Jacob earned an associate degree in 1995 and went overseas to practice as a staff nurse in the general ward and emergency room at Princess Alexandra Hospital in Anguilla in 1996.

“That was a really cool experience for me fresh out of nursing school,” she said. “I was on the same island where my mother owns a beach resort. It is a beautiful place.”

In 1997, Jacob returned to Birmingham, where she took a position as a charge nurse in the OB-GYN department at UAB Hospital. She also went on to earn a bachelor’s degree in nursing and a DNP degree from UAB, where she also became Director of Nursing in the Department of Women’s and Infant Services.

After more than 17 years of holding several nursing and leadership positions within the UAB Health System, Jacobs decided to transition into entrepreneurship. At the time, a mentor of hers owned Healing Waters.

In 2019, Jacobs assumed ownership of the business and built a team of caring and compassionate professionals, including her aunt Sandra and her now-36-year-old daughter, Yentl.

“Healing Waters is for anybody who is concerned about and focused on wellness,” said Jacob, who works exclusively at her business. “It doesn’t matter who you are—you can be in your most tip-top shape or you can have health issues—the focus is simply to help you function at your best naturally.”

“I’ve always felt like I had a special ability to encourage people to heal,” she added. “There’s just something about seeing people go from their lowest to their highest. … That is always the biggest reward for me.”