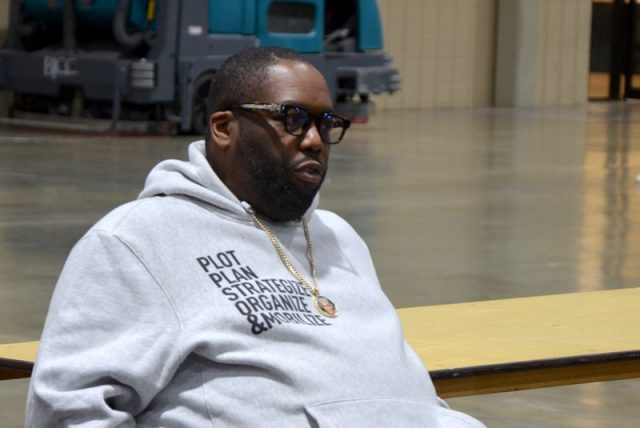 Michael “Killer Mike” Render has become a powerful nationwide voice in the Black community on issues of race, police brutality, economics and more. On Monday, the rapper, activist and entrepreneur brought his message of action to Birmingham.

Render, half of the rap duo Run the Jewels and star of “Trigger Warning with Killer Mike,” said in an interview with AL.com that communities should constantly be organizing and pushing toward equality on a number of fronts, and focusing on state and local elections more than the “circus” of national campaigns.

Render was slated to give the keynote address at Birmingham’s 36th annual Dr. Martin Luther King Jr. Unity Breakfast Monday morning, but travel delays from Atlanta prevented him from arriving before the event ended. Instead, Render participated in a smaller round-table discussion on issues of race with about 30 attendees who were still at the Birmingham Jefferson Convention Complex when he arrived.

Render spoke to the crowd in a light gray hoodie with the words “Plot, Plan, Strategize, Organize & Mobilize,” printed across the front and a gold chain with a picture of his grandmother, who was from Alabama and participated in the marches at Selma and elsewhere across the state in the 1960s.

Render spoke to the remaining crowd as crews worked to break down the stage, speakers and more than 140 banquet tables in the background.

He said the Black community needs organization at the grassroots levels, at churches and at family dinners, in order to continue reaching toward equal rights.

“Your Sunday dinner, after you guys have laughed and had fun and joked about your cousins, should be spent sometimes organizing; self-organizing, or organizing of your family unit and your community,” Render said. “We have not mastered being in a state of constant organization. When we master that, we’ll get higher returns and faster results.”

Before Mike’s arrival, the program at the unity breakfast included appearances by several elected officials, including state Rep. Juandalynn Givan, D-Birmingham, and Jefferson County Commissioner Sheila Tyson. The Unity Breakfast is organized by an organization called the Community Affairs Committee and began in 1986. Last year’s event was virtual due to the COVID-19 pandemic.

The winners of the group’s high school essay contest were recognized and overall winner Rotimi Kukoyi read his essay for the crowd of a few hundred people wearing their Sunday best.

The largest ovation of the morning may have been for comedian Valencia Johnson, known as Mrs. V, who ad-libbed for a few minutes while the organizers hoped Render might arrive in time to speak to the crowd. Shortly before 9 a.m., the program ended with a benediction and the singing of “We Shall Overcome.”

Listed on the program but not in attendance were U.S. Rep. Terri Sewell and Birmingham Mayor Randall Woodfin. A representative of Sewell’s campaign said the congresswoman could not attend because she had been called to a meeting in Washington with Vice President Kamala Harris.

Birmingham native, actor and comedian Roy Wood Jr. sent a video message from New York, where he said he was “hiding from omicron.”