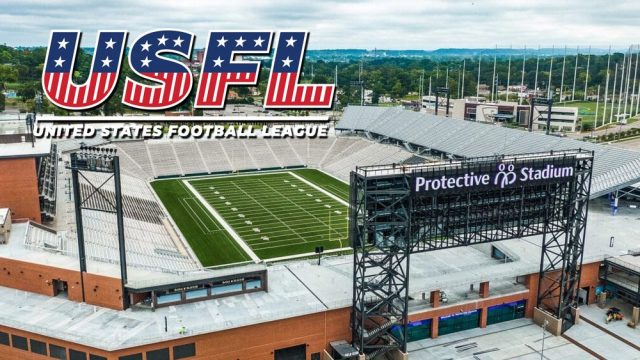 Countdown to the official announcement that the United States Football League will play its inaugural season in Birmingham has finally begun. Officials of the Fox Sports-owned league shared Monday that the league will reveal plans for its eight teams to play 43 games in the city this spring on January 25, at Protective Stadium.

The announcement comes two weeks after the city council unanimously approved a resolution for the mayor to execute an agreement with the National Spring Football League (the USFL’s ownership group) to provide up to $500,000 of in-kind services to mitigate the cost of playing eight to 11 USFL games at Legion Field (primarily police and fire services). The other games will be played at Protective Stadium.

A preliminary agreement between the NSFL and the Birmingham Jefferson Civic Center (BJCC) for the games to be played at Protective was reached in October.

Subsequently, the Greater Birmingham Convention and Visitors Bureau committed up to $2 million to cover costs associated with the season—followed by the city of Birmingham and Jefferson County, each of which pledged up to $500,000 to support the cost of playing the games at Protective.

The league will use the stadiums for free, but will utilize at least 40,000 hotel room nights to house players, coaches, and league officials between April and July. The BJCC and Legion Field will generate revenue from concessions and parking and other areas.

The CVB projects the league to have an overall estimated economic impact on the city and region of $15 million.

“The USFL choosing Birmingham as a host city will have a major economic impact on our city, metro area, and state,” said Councilor Hunter Williams.

Among the eight teams will be the Birmingham Stallions, a reincarnation of the team that was part of the original USFL, which lasted three seasons between 1983-84 and 1985-86.

“It’s a very exciting opportunity for the city of Birmingham and all stakeholders involved,” said CVB board chair Bill Murray.

In October, attorney Michael Davis of Balch & Bingham, which represents Fox Sports, spoke to the CVB board. “They [Fox Sports] thought [Birmingham] would be a perfect fit,” he said, “a perfect combination.”

Last week the league unveiled a banner touting the Stallions on a parking garage near uptown.

This story appeared originally in al.com