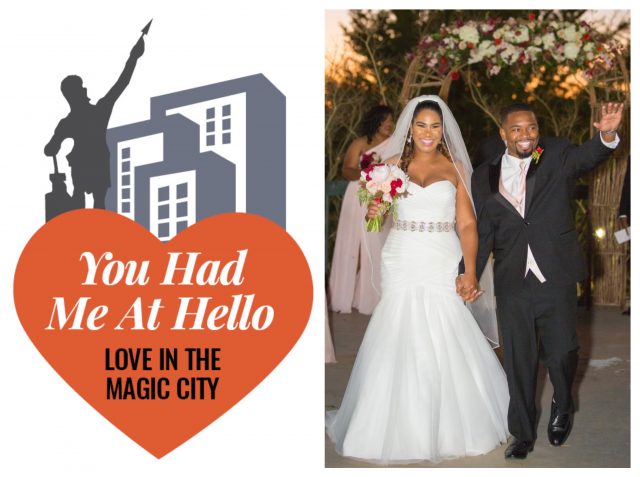 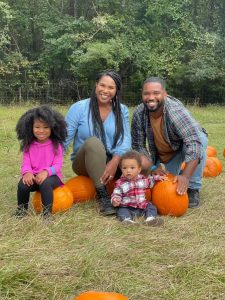 Met: At Homewood Middle School in 2002. Malcolm was in 7th grade and Jocquelyn was in 8th. “He was little Malcolm with the braids, he was short and cute and he was the kid that everybody knew,” Jocquelyn said. “We went through middle school and high school knowing each other but were not dating.”

Malcolm recalled he and Jocquelyn being new kids at the school the same year.  “… I decided to embrace the school and have fun, and she [was a part of] a friend group that I used to always give hugs to every day, so she had to give me a hug too,” Malcolm laughed. “She was as fine as she is today back then, so I used to look forward to her hugs.”

In early 2013, Jocquelyn and Malcolm would meet again when Malcolm moved back to Birmingham from Tuscaloosa where he attended the University of Alabama to open up the Homewood Target. Jocquelyn had also moved back after graduating from Auburn University. “I was working at Pro Insurance in Brookwood and had stopped in Target on my lunch break,” she said.

“… I was stocking a shelf and looked up and all I saw was legs and a bun turn the corner and I said, ‘I know exactly who that is,’” Malcolm said. “I stopped what I was doing and went to speak, and we did the number exchange…”

Jocquelyn said she was happy to run into her old schoolmate, but “he was still little Malcolm to me,” she laughed. “He wasn’t little in stature, but it wasn’t until our first date that I realized he was a man-man.”

First date: February 2014, at Landry’s restaurant on Lakeshore Dr. They met for Happy Hour after texting and chatting on the phone for a year. Jocquelyn said she was reluctant to accept a dinner invitation from Malcolm.

“…our communication hadn’t been consistent, but Malcolm kept trying to hang out with me, and I never really engaged. …we ended up on that date because he gave me an ultimatum. He said ‘either we hang out or lose my number’,” Jocquelyn recalled.

She agreed to Happy Hour but had arranged for a friend to meet her for dinner an hour into her and Malcolm’s date so she’d have an excuse to cut Happy Hour short. But to Jocquelyn’s surprise “when I sat down with him there was immediate chemistry, and we sat and talked for hours.”

Jocquelyn’s friend had arrived according to plan, but since things were going well, Jocquelyn didn’t want the date to end “…so my friend ended up joining us, and when the date was over we all went outside to the parking lot and said our goodbyes [but me and my friend] waited for Malcolm to leave, then went back in the restaurant to have dinner and discuss Malcolm,” she laughed. “I was in Landry’s that night for probably four hours.”

Malcolm said, “[Jocquelyn and I] were vibing, we were catching up and it was like we never missed a beat; that common rapport was still there. She didn’t mention her friend coming, I just remember her showing up …,” Malcolm said.

The turn: “July 2014, we were at my friends birthday party who was newly engaged, and I think being around an engaged couple had Malcolm feeling lovey-dovey, and he gave me another ultimatum and said ‘either we’re going to figure out what we’re doing or you can lose my number because I don’t just want to be your friend’… [Malcolm] is a man that knows what he wants,” Jocquelyn said.

That night, the pair spent their first night together and when they woke up, Jocquelyn said, “…you my boyfriend now, and you’re gonna marry me,” she laughed.

“We had been inseparable from our first date. She was a weird person and I liked it. I used to be late coming back to work on my lunch break because we used to [sneak in meet up’s]. A defining moment for me was when we were sitting in a park, just us two, and we were talking about life and raising a family and I knew then that we could do life together. We weren’t [exclusive] yet, that was during our hanging out phase,” Malcolm said.

The proposal: June 2016, in Destin, FL. Malcolm had joined Jocquelyn and her family on their annual trip and had his family come as well to witness the proposal from a distance on the beach.

“Jocquelyn had been offered a job in New York the prior year and she actually didn’t accept the position because of us, and I couldn’t let that go unanswered,” Malcolm said. “She was really into shows and movies about queens and the Victorian Era, so that’s where I got the idea to incorporate a sandcastle in my proposal. We were on the beach making a big sandcastle with her nieces and nephews and cousins, and I made sure they were involved in it because she’s big on family. And after we finished the castle I said, ‘the foundation is built, now all the castle needs is its queen’, and I dropped to one knee and said ‘will you do me the honor of marrying me?’ and she cried and said ‘yes’.”

“I actually had already gotten clues earlier in the day talking to my sister because she kept trying to make sure I looked cute at the beach, so I knew something was up,” Jocquelyn said. “I cried, I thought it was so sweet and thoughtful. I loved that my whole family was there and that I got to [share] it with my mom, sisters and [late] grandfather, and that I got to go out and celebrate with my family and his family…  They popped up out of nowhere on the beach after he proposed and that was a sweet surprise. I’m very close to my in-laws, so having everyone there made it that much more special.”

Most memorable for the bride: “I just remember we were late, and I was feeling anxious about being that. But there was a calm that came over me as I was walking down the aisle the second I saw Malcolm, I had such peace,” Jocquelyn said. “Malcolm got choked up during our vows, we did personal vows, and the night before my grandad said, ‘I only like the Lord’s vows, but I guess we can do both’. [In the end] my grandfather appreciated our vows and approved.”

Most memorable for the groom: “I remember walking through the venue behind her grandad and my brother, and seeing the place, it was beautiful. But every emotion that I’ve ever felt in my life was rushing through my body at one moment. It was a real out-of-body experience, Malcolm said.

The couple honeymooned on a short cruise that Jocquelyn won through couponing to Nassau Bahamas. “We had fun relaxing on the beach with rum inside an actual coconut, sitting on the beach, enjoying the breeze,” Malcolm said. “It was the perfect R&R, and connection for us,” Jocquelyn added.

“When you become parents, you have to make time to rest and enjoy each other. Malcolm and I vacation together, just us . . . It’s marriage care. Don’t be afraid of counseling even when things are good. You have to communicate. Men shouldn’t be afraid to [be domestic], it takes two for the household chores and duties to get done,” Jocquelyn said.

Happily ever after: The Griggs have two children, daughter, Lailah, 4, and son, Jonah, 1.

Jocquelyn, 33, is a Homewood native, and Homewood High School grad. She attended Auburn University where she earned a bachelor of arts degree in psychology and is a realtor with Keller Williams in Vestavia.

Malcolm, 31, is a West End native and Homewood High School grad. He attended the University of Alabama, where he earned a bachelor’s degree in management information systems, and is a freelance graphic designer, which he operates under his company Griggs Designs based in Birmingham.