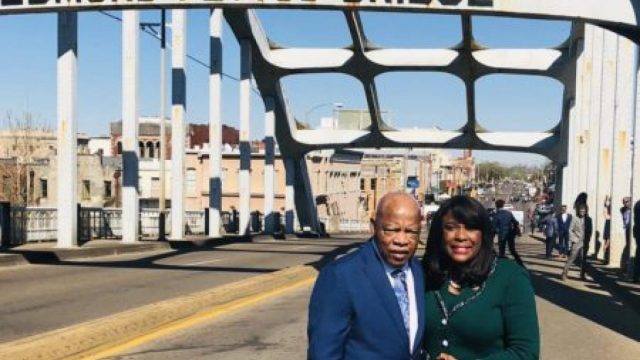 In August, Rep. Terri Sewell stood at the foot of the Edmund Pettus Bridge in her hometown, Selma, Alabama, to tout H.R. 4, the John R. Lewis Voting Rights Advancement Act.

Sewell, currently Alabama’s only Black member of Congress and the delegation’s only Democrat, had high hopes after she introduced the legislation named in honor of her late mentor and friend.

The House voted soon afterward to pass the bill, but it stalled in the Senate last year. In January, a modified measure called the Freedom to Vote: John R. Lewis Act failed to clear the chamber.

“We’re at a great inflection point in our nation’s history,” said Sewell, a Harvard-educated lawyer who was first elected in 2010. “We have to remember John’s words: ‘Ours is the struggle of a lifetime, or maybe even many lifetimes, and each one of us in every generation must do our part.’”

Sewell returned home this month and headed to the infamous bridge for the 57th commemoration of Bloody Sunday.

On March 7, 1965, Selma was catapulted into the nation’s consciousness. Hosea Williams of the Southern Christian Leadership Conference and Lewis, then the chairman of the Student Nonviolent Coordinating Committee, led more than 500 peaceful protesters over the bridge en route to the State Capitol. The march was sparked by the killing of a young local man, Jimmie Lee Jackson, and demands around the right to vote.

Armed state troopers and a deputized posse met the men, women and children with brute force, firing tear gas and swinging billy clubs, bullwhips and cattle prods. The violence was captured on television and in newspaper images. A second march was cut short, but weeks later, Martin Luther King Jr. led thousands of nonviolent demonstrators who completed the 50-mile march from Selma to Montgomery, where a rally took place on the State Capitol steps. Their actions spurred passage of the Voting Rights Act of 1965.

The weekend of March 7 marked another anniversary for that pivotal chapter of the civil rights movement, as hundreds congregated for the annual Selma Bridge Crossing Jubilee. The event drew Vice President Kamala Harris and Cabinet members, members of Congress, relatives of King and Lewis, activists and people from around the country.

“Today, we stand on this bridge at a different time,” Harris said, calling the site “hallowed” ground. “We again, however, find ourselves caught in between — between injustice and justice, between disappointment and determination — still in a fight to form ‘a more perfect union.’ And nowhere is that more clear than when it comes to the ongoing fight to secure the freedom to vote.”

For Sewell, “voting rights are deeply personal.” A native of Alabama’s so-called Black Belt, she has roots that run as deep as the rich black soil that helped define the region. She was raised with two brothers by a librarian mother and a father who was a teacher and coach.

“I’m a daughter of Selma,” said Sewell, whose 7th Congressional District also includes Birmingham, Montgomery and Tuscaloosa, as well as smaller rural enclaves. “I stand on the shoulders of freedom fighters and foot soldiers.”

One of them was Amelia Boynton Robinson, the organizer who in 1964 became the first Black woman to seek a congressional seat in Alabama. She was beaten unconscious during the bridge protest. In 2015, Boynton was Sewell’s guest at President Barack Obama’s penultimate State of the Union address. “She joined the march that year and died months later at 103,” Sewell said.

On that fateful morning decades before, Boynton and fellow marchers started out at Brown Chapel African Methodist Episcopal Church in Selma. Sewell’s family has worshiped at the church, now a national historic landmark, for decades. It was where she first met Lewis and many in the movement as a youngster.

After Sewell’s historic election to Congress, Lewis became a mentor on Capitol Hill and a close friend. She fondly called him the “Boy from Troy,” referring to King’s nickname for Lewis, a native of Troy, Alabama. Lewis dubbed his protégé the “Girl from Selma” in return.

They served together on the powerful House Ways and Means Committee; Sewell was recently named a co-chair of its new Racial Equity Initiative. In 2013, the two sat side by side in the gallery as the Supreme Court heard oral arguments in the case Shelby County v. Holder. For decades, the Voting Rights Act helped ensure equal access at the ballot box by requiring states and localities with histories of voter discrimination to get preclearance from the Justice Department before they could change their voting laws.

According to the Brennan Center for Justice at New York University School of Law, legislatures have introduced more than 400 bills in 49 states that Democrats contend would restrict access to the ballot and disproportionately affect voters of color. The GOP and supporters have termed them voter integrity measures, and dozens have become law.

The Supreme Court halted a lower court order last month requiring Alabama to redraw its new congressional map. Last year, a panel of federal judges struck down the map because it did not provide for two majority-minority districts. While Black people are about 27 percent of Alabama’s population, they are represented in only one of its seven congressional seats.

Previous versions of H.R. 4 have also passed the House but faltered in the Senate. The bill was renamed for Lewis after his death on July 17, 2020. It would restore a section of the Voting Rights Act that stopped discriminatory voting changes before they were implemented, restore another section to remedy denial of voting or dilution of the right of people of color to vote, expand voting access (that is, early voting and same-day voter registration), establish Election Day as a federal holiday, ensure access for people with disabilities and more.

“It would re-establish much-needed federal oversight to ensure that minority voters are fairly represented,” Sewell said.

While advancing federal voting rights has been a major focus for Sewell, so have issues like jobs, education and health care access.

Helping her constituents access Covid-19 care and other health conditions has also been a priority. She watched her father, Andrew Sewell, who died in 2017, battle a series of strokes. Her mother, Nancy Gardner Sewell, the first Black woman on Selma’s City Council, died in June. Like Lewis, she had pancreatic cancer.

Sewell is lead sponsor of a measure that would help ensure that new, innovative blood-based cancer screenings are covered by Medicare after they are approved by the Food and Drug Administration. She was invited to the White House for President Joe Biden’s announcement of the relaunch of the Cancer Moonshot.

Sewell, who also holds degrees from Princeton and Oxford, has championed Alabama schools and colleges. As vice chair of the Bipartisan Congressional HBCU Caucus, she has sought increased funding and support for Tuskegee University, Alabama State University and other nearby institutions.

Ever mindful of the sacrifices of civil rights heroes — many of them unsung — she says she views what has transpired around voting rights as a roadblock, not the end of the road. For example, New York is considering its own version of the John R. Lewis Voting Rights Act.

Sewell, who is up for re-election this year, vowed that if voters return her to the 118th Congress, she plans to reintroduce the bill.

“Change rarely comes in the halls of Congress without agitation,” said Sewell, who said she believes senators have to be pressured and that the public must “mobilize, organize” to revamp voting rights. “We can be disappointed or frustrated. But we must never be deterred. Your vote does matter.

“History doesn’t end here,” she added. “As long as I have breath in my body, I will continue to fight for voting rights.”

Microsoft may earn an Affiliate Commission if you purchase something through recommended links in this article.