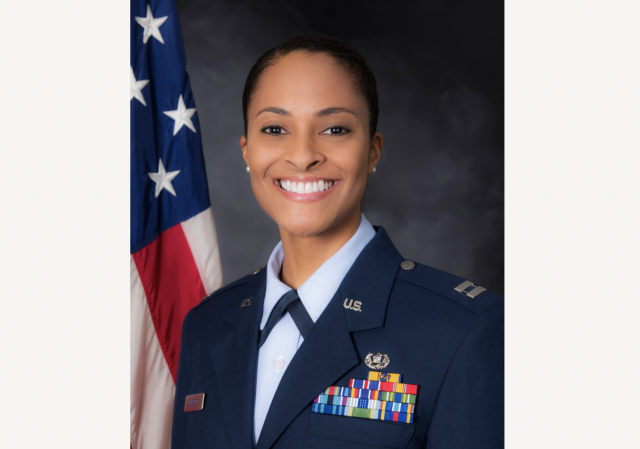 Captain Ashley N. Johnson, United States Air Force, is a Birmingham, Alabama native and the Chief of Military Justice for the 501st Combat Support Wing at Royal Air Force Alconbury, United Kingdom. In that capacity, she oversees all criminal law matters within the Wing, and is the Wing’s lead prosecutor on all courts-martial and administrative hearings. This article originally appeared on the 501st CSW official website.

Tell us a little about yourself and your background:

I was born in Los Angeles, CA, but my family and I moved to Birmingham, AL, when I was really young. My maternal grandmother was the youngest of 17 children, so I have a lot of cousins. I graduated from Spelman College in Atlanta for my bachelor of arts degree, and University of Maryland School of Law in Baltimore. I’m licensed to practice law in California, New York, and Washington, D.C. I love traveling and have lived in, worked in, and traveled to over 30 countries. I like learning foreign languages, and I speak Russian, Arabic, Spanish, and French to varying degrees of proficiency. I stay active, and I enjoy the sorts of activities the Air Force would call “high risk:” skydiving, scuba diving, riding my Suzuki V-Strom [motorcycle], flying airplanes, hiking, deep-sea fishing, plinking with my rifles, and basically anything in/on the water.

How did you get into your current profession?

Law is sort of the family business. In my family, you either become a doctor or a lawyer. My mom’s a judge, my dad owns his own law firm, and my sister and her husband are both physicians. All of my aunts and uncles are doctors, my maternal grandfather and great-grandfather were doctors, and my paternal grandfather was a lawyer. My cousins, sister, and I were all sort of groomed from childhood and expected to pursue either of the two professions. For instance, as a kid, if I wanted to do something or go somewhere but my parents disagreed with me or didn’t feel like taking me, they’d tell me, “Make your argument.” If my argument was good enough, they’d let me do whatever that thing was. If my argument was subpar, they’d just tell me no and explain where my logic was weak. When your family talks shop and literally everyone is talking either law or medicine, as a child, you grow up being very comfortable in those worlds.

What inspired you to join the military?

My true passion is conflict resolution of international crises and advocating for the human rights of marginalized groups. Throughout college, law school, and up until I joined the military, I worked for a lot of government and international nonprofit agencies to hone in on that passion and try to figure out how to make a career out of it. For instance, I worked as a fellow for the U.S. House of Representatives on the Committee on Homeland Security and in a Member’s office. I also worked for the Department of State in the Political Section at the U.S. Embassy in Nigeria. There, I focused mainly on tracking corruption in the highest levels of the Nigerian government, but I also worked on some of their human rights issues. For example, I remember on my very first day of work, I was pulled into a meeting with an attorney and his 18 clients – they were called the “Bauchi 18.” Nigeria is interesting in that you can split the country in half. The North is predominately Muslim and the South is predominately Christian. In the North, they operate under Nigerian federal law as well as Sharia, and these 18 men were arrested at a gay marriage in the northern Bauchi state. They were being prosecuted under Sharia, and they were requesting the U.S.’s help to try to advocate for their human rights.

Exploring the non-government route, I studied abroad in Jerusalem while I was in law school, and I took classes focused on the Arab/Israeli conflict and humanitarian law. I was able to travel around Israel and interact with United Nations aid workers and tour Israeli settlements and Palestinian refugee camps in the West Bank. I also did my international humanitarian law clinic in Windhoek, Namibia, where I worked for the nation’s only public interest law firm. My work primarily focused on two major cases. With the first case, I worked on civil torture claims against the Namibian government by nearly 200 men who were being held in jail on treason charges for allegedly being part of a movement to secede part of Namibia into Botswana – remnants of the damage done by colonial powers drawing arbitrary national lines throughout Africa and thereby splitting up tribes. They’d been beaten and tortured while pending charges, so we helped them with those claims. In the other case I worked on, I represented villagers who were suing their village government for failing to provide access to affordable, clean water and sanitation facilities. Essentially, our case was establishing a national human right to water in Namibia.

After law school, I worked for a year at a national crisis hotline for victims of human trafficking, spending most of my shift helping victims of sex trafficking escape their captors and report their situations to law enforcement. Then, I joined the Peace Corps and served for two years in a small village in Kyrgyzstan. Living in Kyrgyzstan was interesting in that they’re completely different from the U.S. in most superficial ways – the country is predominantly Muslim, it’s a post-Soviet nation, all of their media flows through Russia, they grow up bilingual speaking Russian and Kyrgyz, and they know as little about the U.S. as your typical American really knows about Russia or any other Soviet state. What I learned by living there is that you’re never really going to be able to understand a culture or another perspective unless you actually try to live as they do and attempt to see the world through their lens.

Name a couple lessons you’ve learned in your life and/or career.

One, there’s no such thing as a “natural-born leader.” Leadership is a skill, and just like with any skill, it has to be actively studied and practiced for one to get good at it. Leadership ability is not inherent with rank or position. If you’re working for a leader who can’t give you any recommendations on good leadership books they’ve read recently, be wary. If you are in a leadership position and you haven’t read any good leadership books lately, do better. This isn’t to diminish leadership ability to one’s willingness to read a book, but I’ve generally found that those who aren’t even willing to pick up the book to continue to learn and perfect the leadership skill, aren’t all too interested in actually becoming better at the skill.

Two, Pocahontas says it best in the song “Colors of the Wind,” “You think the only people who are people / are the people who look and think like you / But if you walk the footsteps of a stranger / you’ll learn things you never knew you never knew.”

Please talk about your insights or experiences growing up in Birmingham, AL:

Growing up in Birmingham, AL, had a significant impact in shaping my perspective on a lot of things. A lot of people like to imagine that segregation and Jim Crow was so very long ago, but really, my mother integrated a high school in Birmingham. Those same people who were screaming at her “N-word get out of my school!” grew up to become the parents of my classmates. That mentality certainly didn’t die; in many cases, it just passed from one generation to the next. We are literally just one generation removed from violence-enforced segregation being the status quo in America. Let that sit with you for however long it needs to for it to resonate. Fighting for the rights and representation of Black Americans is still relevant.

I was the only Black student in my class until middle school. One of the most significant moments of my life occurred when I was a senior in high school. I was elected the first African-American student body president of my school. It was a private school, and we had a uniform policy. There was a group of students in my school, who were widely known to be active members of the Ku Klux Klan, and they would regularly wear shirts with Confederate flags under their school shirts, so the flag could be seen through their uniform. In the South, waving a Confederate flag in a black person’s face is basically an act of aggression. So the Black students at the school asked me to take it up with the school administration to ban Confederate flags from school property, as it went against the uniform policy and the school’s inclusion policy. Taking up that effort felt like we’d regressed back to the 1950s with all of the blatant racism that ensued.

There was a tradition that at the end of the school year, the outgoing student body president would give a speech at a school assembly to relinquish their powers to the next president, and in that speech, they would talk about the legacy they hoped to leave behind. In my speech, I said the legacy I hoped to leave behind was “tolerance, at the very least, for all people.” What I said was literally that generic, but everyone knew what I meant. I got so many threats from the racist Klan kids in my school that for the rest of the semester, the principal had to walk me to each of my classes and the Dean of Students had to watch my car during free periods. That’s when I knew I was done with Alabama for a while. I made it my mission to try to travel to as many places as I could and truly experience cultures that are completely different from my own. Basically, I never wanted anyone to look at me the way I looked at those racist kids in my class, and I never wanted ignorance to be my crutch.

It truly blows my mind when I meet people who don’t understand how far we, as a nation, have to go in terms of establishing civil rights and equal opportunities, and remedying the massive imbalance that systematic racism has created in the United States. I get genuinely confused when I meet people who don’t believe racism is still a major problem in America. Fair, not everyone grew up with Klansmen in their classes. Growing up in Alabama, race was always a factor – I was never seen as just Ashley; my blackness was always a part of the equation. So when people fail to grasp why Black History Month matters, why so many still advocate for representation at all levels, or why social justice movements around racial injustice can attract such passion and fervor, I can’t help but think what a privileged perspective that individual must have about their opportunities and surroundings.