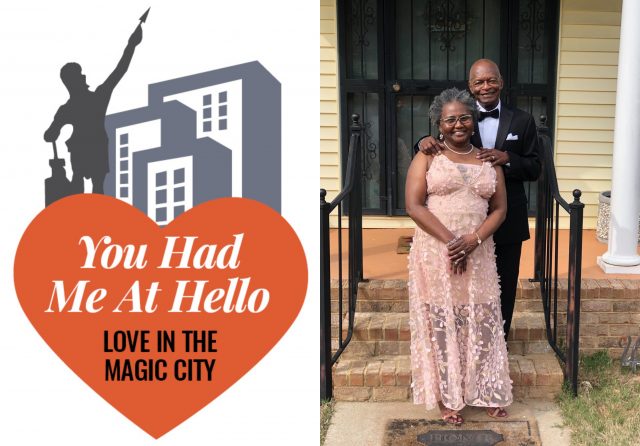 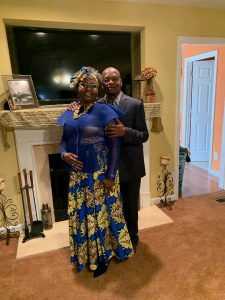 “I didn’t know Charles, but I knew of him because I had gone to school with his brother, and when I saw [Charles] that night he had his shirt hanging out and I thought where is this man coming from, with his shirt hanging out? did he just get up out the bed?” Kathy laughed. “I found out later that that was his style to wear his shirt [untucked] … but I didn’t like that too much, so when he asked me to dance, I told him ‘later.’”

Charles didn’t give up.

“He asked me to dance during a slow song, and I never slow danced when I was out because I didn’t like being that close unless it was somebody special, so I don’t know what made me say ‘yes’ to dance with him,” she said. “I guess he was looking cute… I gave him a chance and we went from there.”

“I was immediately attracted when I saw Kathy, she was looking good and I went and spoke to her and asked her if she wanted to dance,” Charles said. “I told her that I noticed her and said, ‘I sure would like to kiss you’, and I gave her a smack on the jaw. I bought her a drink, and we sat and talked, and I told her I would like to get to know her better… she reminded me of some people from the neighborhood I grew up in and turns out she was related to them and we hit it off from there.”

First date: The following weekend at a small eatery called Boardwalk in Homewood. “We got to know each other a little better and we both said that we were looking for friendship and not anything serious. We had both [been married before] and said we didn’t want to get married again,” Charles said. “We talked the night away, we knew a lot of the same people and that enabled us to talk about who we knew and things we experienced.”

“I didn’t want the night to end. Even though I was only looking for friendship, I really thought he was a nice guy,” Kathy said.

The turn: By Christmas 1992, Kathy and Charles were an item.

“After we had dated for a while, I knew that she was somebody that I would like to date exclusively, and we tried that and it seemed to work. I was satisfied with it,” Charles said. “We’d have our little spats and we’d say we should end this and not see each other anymore, but I’d end up calling her back or we’d see each other and ended up right back. We had something special and it just continued to progress.”

The proposal: January 2000, at their apartment in Homewood. “…we eventually moved in together and had been dating for 10 years, and I was fine with that because really all I wanted was for her to be with me. But one day she came home and told me I was robbing her of her youth and that it was time to do something different. My mother also had an opinion about us [shacking]… So, I had a suggestion, I said, ‘why don’t we get married? and we did,” Charles said. “I understood what she meant by me robbing her of all her youth, and we had been together for a while and I told her if she had mentioned it earlier we could’ve gotten married much sooner.”

“We were having one of those heated conversations and I told him he done took all my youth, and we ain’t married so he can meet and leave me for some lil young girl, and I wasn’t having it. So I told him, if you don’t marry me, I’m gone,” Kathy said. “Then he gonna tell me that I should’ve said something sooner if I wanted to get married,” she laughed, “I was absolutely elated when he said, ‘let’s get married.’”

“It was supposed to be a private ceremony after church, just us and Reverend Jackson, but he announced after his sermon that there was going to be a wedding after church, and normally everybody would leave the sanctuary after service, but nobody moved,” Kathy laughed. “The church was still full and everyone watched us get married.”

A month later the couple had a reception at the Howard Johnson hotel in Homewood.

Most memorable for the bride were her emotions.

“That day was a very special day for me, I was a little nervous because I was getting ready to marry the person that I love and was coming into a new family, and I was going to have to learn each person. I loved his mother to death; we already had a good relationship and I didn’t have a problem with her. But he had a large family and I was afraid everyone wouldn’t accept me,” Kathy said.

Most memorable for the groom was they were finally getting married. “I was relieved we were finally tying the knot; I knew I loved her and she was the person that I wanted to be with, and when I saw that she was happy that made me happier,” Charles said.

Words of wisdom: “The most important thing is to have God in your marriage. And if you have a problem, don’t go to sleep on it. Try to work it out. And if you can’t, when you first wake up try to get it done,” Charles said. “Don’t keep many secrets, and don’t lie because when you tell one lie, you gotta tell another and then you get confused. So it’s best to have an open and honest marriage and keep God at the center of it.”

Kathy agrees with her husband’s sentiments and added, “but try not to knock his head off (just kidding),” she said.

Happily ever after: The Carter’s have four children and 10 grandchildren.

Kathy, 62, is a Powderly native, Jones Valley High School grad, and attended Lawson State Community College, where she earned an associate’s degree in registered medical assisting. She works as a nurse at Vitalogy Wellness Center in Birmingham.

Charles, 71, is a Grasselli Heights native, Wenonah High School grad and attended Stillman College, where he earned a bachelor’s degree in business administration. He is a member of Omega Psi Phi Inc. and retired from the City of Birmingham as a health and safety administrator.