Back in 2020, before the start of the COVID-19 pandemic, Vinson Walker got a taste for a baked potato but not one from the established eateries in the Birmingham area.

“I couldn’t find one, so I went to bed … still wanting that baked potato,” he recalled. “I woke up the next day, and God put the idea in my mind to [start a restaurant].”

And that was the beginning of “Potatoe Potahtoz The Perfic Pizza,” which Walker and his business partner, Randal Scott, opened in February 2022 at 707 Richard Arrington Jr. Blvd. The restaurant offers gourmet potatoes and pizzas made fresh in front of customers.

Starting Birmingham’s first fusion baked potato and pizza restaurant may have seemed easy, but it wasn’t.

“I heard the word ‘no’ a lot,” said Walker. “I heard people laugh at the idea of a potato place. I had people bail on the business plans. … But I had a confirmation from God that this [business] was something I should pursue. Once you get that confirmation, everything else falls into place.

“What makes us different from [other restaurants] is the craft we put into our potatoes,” Walker added. “We’re oftentimes inspired by real chefs and fresh ingredients. It’s not your regular baked potato and pizza.”

At Potatoe Potahtoz The Perfic Pizza, customer service is a top priority. “Immediately when you walk in, you’re hit with a mom-and-pop style atmosphere,” Scott said. “We want you greeted with a smile as soon as you walk in, we want you to feel welcomed and appreciated … like this is a second home.” 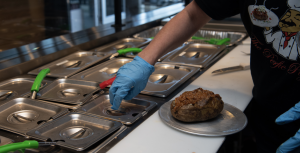 The business has a unique name that came about after the duo tried to register it with the state of Alabama and found restaurants already registered with the names “Potatoe,” “Potahto,” and “Perfect Pizza.”

“So, we improvised and came up with Potatoe Potahtoz The Perfic Pizza,” Scott said. “It’s literally a fusion of Walker’s potato idea and my pizza idea—and, boom, we are here just like that.”

“My favorite would have to be the smoked brisket potato,” Walker said. “You can never go wrong with some mouthwatering brisket tossed in some [homemade] barbecue sauce and slaw.”

The pizza choices include numerous toppings and even a gluten-free crust.

“I never met a person who doesn’t love pizza, especially some real, homemade specialty pizza with a buttery crust and all the melted cheese,” Scott said,  “… It’s heaven.”

Other menu options include smoked polish sausage, a turkey “potatoe” soup, and wings, as well as a variety of desserts, including lemon and strawberry cake, cheesecake, and fire-roasted peach cobbler.

Potatoe Potahtoz The Perfic Pizza operates with a staff of nine that includes family members. Walker’s son, Jordan, 22, and daughter, Brianna, 26, often help out, as do Scott’s daughter, Tameka, 45, son, Randal 42, and nephews, Keith and Kenn Scott, both 42.

“It’s exciting to create a legacy for our family,” Scott said. “I want them to be able to grow up and see something like this, … [to know] that something can be theirs one day or that they can go and start whatever they want because they’ve seen it before. That’s, by far, the most rewarding part for me.”

Walker, 53, and Scott, 64, both have long been entrepreneurs.

“I’ve done myriad things, from financial planning to selling insurance to getting into real estate,” said Walker, a Hueytown High School graduate. “At that time, I thought real estate was my passion. … I had no idea God would send me down the path of opening my own spot one day.”

Scott, who graduated from West End Academy on Birmingham’s West side, remembers exactly what led him to become his own boss.

“Growing up in Ensley, Holy Family Hospital was a known Black hospital,” he recalled. “My mother and my grandmother worked there. … When my brother grew up, he also worked there.

“We were all living in the [Tuxedo Court] projects, and my mom had gotten a promotion to be the head dietician [at Holy Family]. In the Black community at that time, it was exciting to see somebody in the projects get a job like that. I remember [my mother] coming home crying on the day she was supposed to have gotten the promotion. … She didn’t get the job. They gave it to a white guy who had been working there for five years, while my mom had been working there for 20. That’s when I knew I never wanted to experience anything like that myself, so I knew I wanted to own my own business.”

In 1989, Scott established the Scott Contracting Company, where he also currently works. And he now owns the Holy Family Hospital building.

Walker and Scott are lifelong friends, and they’ve been business partners since the 1990s.

“I knew of Scott’s construction company, … but I didn’t know anything about construction because my background is in finance,” Walker said. “I went up to his building one day, and he kind of took me under his wing. We’ve built houses. We’ve poured concrete. He taught me a lot about construction, to the point where I was able to make a good living on my own buying and owning property for a while.”

Walker describes himself as the “idea man,” while Scott is the man that “can make it happen.”

When Walker came up with his idea to open a restaurant, he called a few people who he thought may be interested in investing. One of those was Scott, who was considering a brick-and-mortar pizza shop near the Birmingham CrossPlex in West Birmingham.

“I called Scott and expressed to him my idea like I’d done many times before,” Walker said. “Immediately, I knew we had something good on our hands because that’s when he told me about his idea for a pizza place. … So, we thought it was the perfect idea to combine the two.”